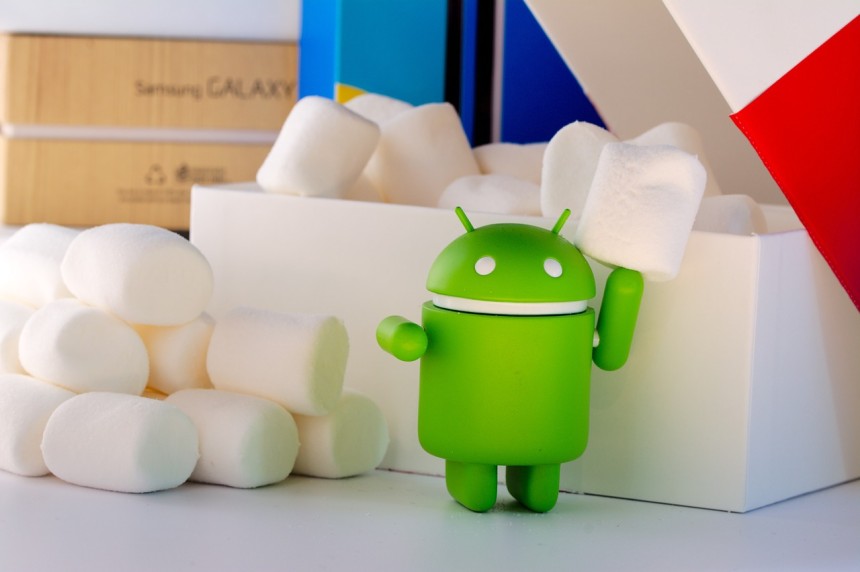 GIF is a kind of multimedia content. People love to this format because it lighter than video and need no special platform to play. Most regular image viewers have the capability for playing GIF.

If you want it, you can create your own animated GIF with your smartphone. Let me tell you, creating an animated GIF has never as hard as you thought. You don’t have to be skillful in image or video editing to create an animated GIF. You can turn a trimmed video into an animated GIF. Or you can also gather several images to become a single file of GIF.

So how, ready to create your own GIF with your Android smartphone? Just make sure you have enough spaces to store your collections since you might will be addicted. Here are the tools you can use. 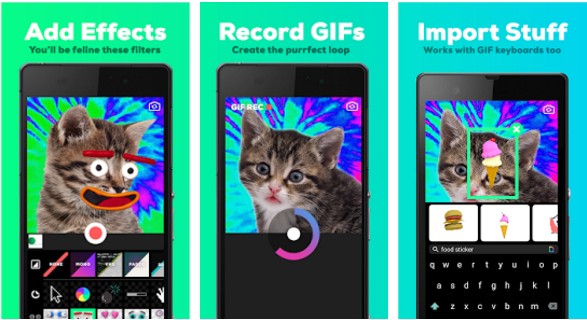 If you ask your friend where you can get tens of animated GIFs for free, chances are she/he will say Giphy. Giphy is a well-known website for free animated GIFs. The site also covers those who want to express their creativities on GIF by offering tools for making animated GIF. Giphy provides you two GIF maker tools, web-based an mobile app. The mobile app of Giphy which you can use to create animated GIF is called Giphy Cam and it’s available on two major platform Android and iPhone.

With Giphy Cam you can turn a trimmed videos or photos on your gallery into a funny animated GIF. Giphy Cam has some effects that you can apply on GIF you are creating. 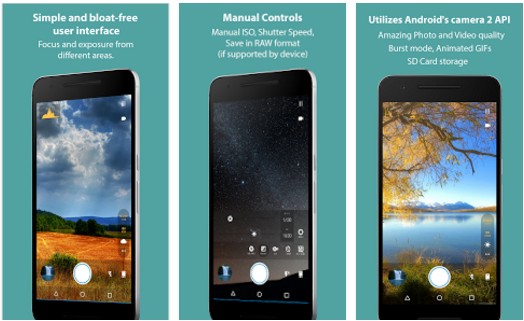 As you can guess from its name, Footej Camera is basically a camera app with some features meant to accomplish photography needs. But, you can also use this app to create an animated GIF since it also has a feature to handle it. Not as complete as Giphy Cam which allows you to add some filters on the GIF you are making, but Footej Camera is not a bad choice. Footej Camera is a freemium app so you might have to upgrade your account to get advanced features. 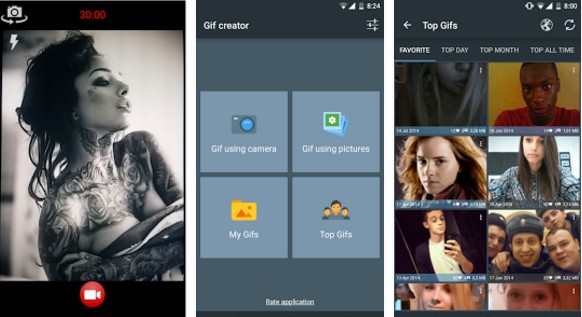 Its name has described it all. Gif Creator is an Android app that is specialized to create, edit and share animated GIFs. The app only allows you create an animated GIF with the maximum duration of 30 seconds. But, it should be more than enough since you are not creating a video. The way Gif Creator works is a bit similar to Footej Camera. You can directly turn captured photos into a GIF or prefer to select from existing photos on your gallery. Some filters are also available if you want to make your GIFs be more attractive. Gif Creator is a premium app but you are allowed to give this app a try before you buy it. 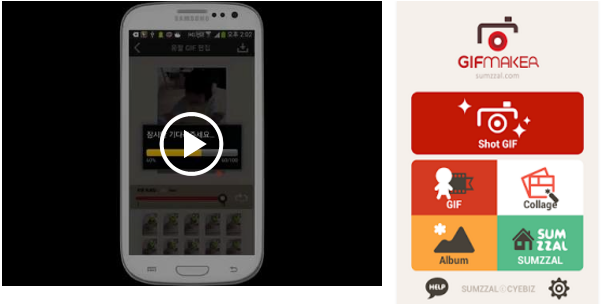 Like Gif Creator, this app’s name has represented it all about what this app can do. This app also lets you to directly turn your captured images into an animated GIF. Or, you can also make a gif from images already on your device, create collages, and more. Unlike Gif Creator, Gif Maker is completely free. The maximum duration of GIF you can create with this app is 25 seconds. Effects are also available. 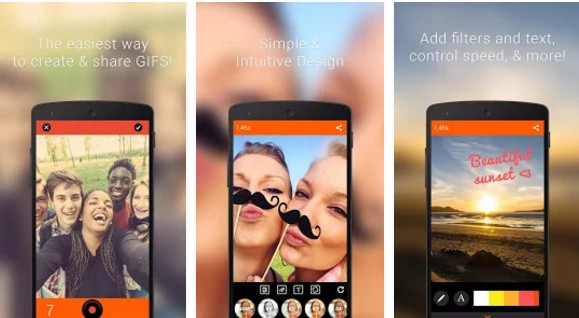 Another tool that you can use to turn your captured images into an animated GIF. You can also edit your existing GIFs other than creating one. Just like other apps on the list, Gif Me Camera also comes with an easy-to-use user interface that you can understand in minutes. Want to apply some effects to your GIF like Instagram photos? You can do it too. One thing you probably don’t like about this app is that you have to see a watermark on your GIF surfaces. You need to upgrade your account to pro if you want to remove it. 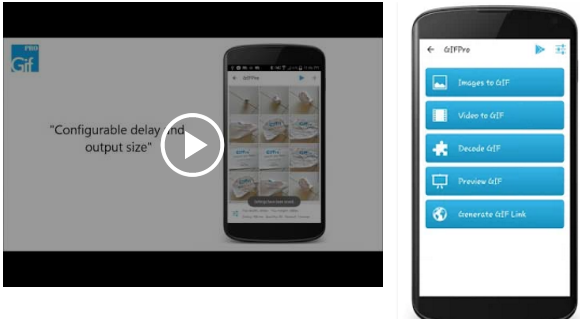 “Gif Pro” is just a name because this app is basically free. Gif Pro is another app that is meant to accomplish your GIF-related needs. You can’t only create a GIF but also can edit your existing ones. One of interesting features of Gif Pro that not all similar apps have is its capability to adjust the output size. Other features offered by Gif Pro include effects, frames, stickers, text overlays, and lots more. 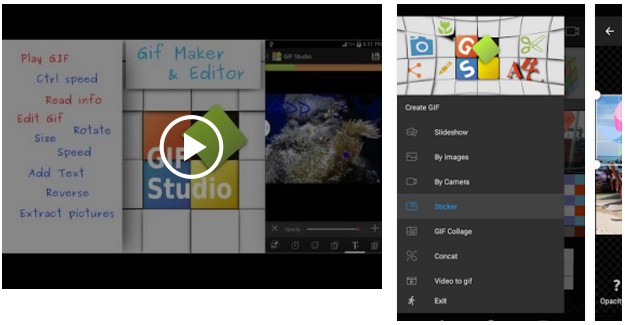 Another free tool for creating GIF. Generally, GIF Studio is not too different to other GIF makers on this list. It is capable to transform your trimmed videos into animated GIF as well as photos. But, there is a prominent feature of this app that you will love to. You can extract images from GIFs to find out what images are in a certain GIF. You can also adjust the output size, speed, loops and lots more. 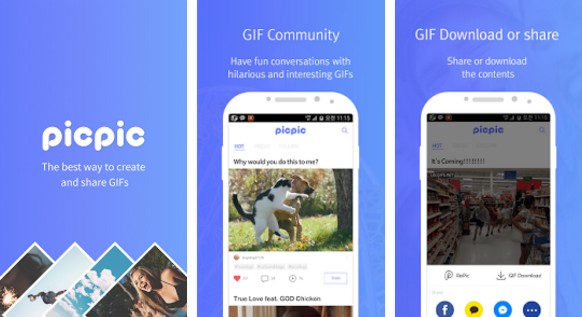 PicPic is similar to Giphy where you can discover GIFs submitted by the users from around the word. But, it’s only available for mobile. To make it easier to find the kind of GIF you want, PicPic is also equipped a search feature. Want to share your GIFs? Sure you can do it too. Although not as complete as other apps on this list — especially ones that is specialized for creating GIF — you can also rely on PicPic every time you want to create a GIF. 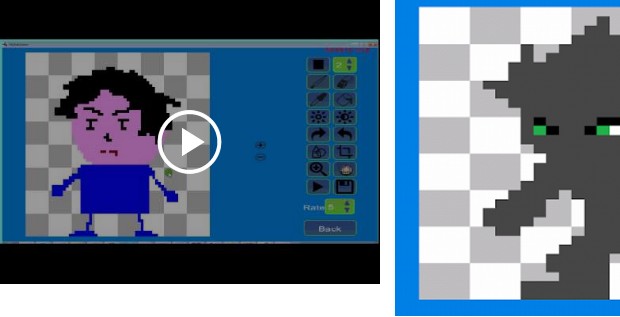 If you want to create a unique GIF with your Android smartphone, you can try this tool. Pixel Animator:GIF Maker will stimulate your creativity as it requires you to create a GIF by hand. You can draw characters and use pixel art to create little GIF scenes. The focus of this app is basically pixel art, which is does pretty well, and the GIF creation is a bit of a side feature. Pixel Animator:GIF Maker is a freemium app. The free version of this app allows a GIF with 15 frames while the pro version gives you unlimited frames to work with. 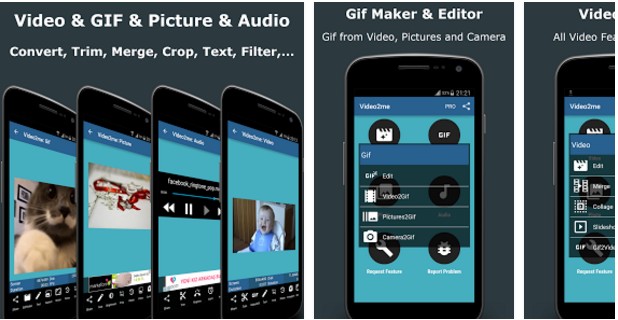 Last but not least. Video2me is another app you can rely on every time you want to spend your spare times by making an animated GIF. Technically, Video2me is a video editor app with the complex features. One of Video2me features is the capability to turn videos and photos into animated GIFs.

The GIF maker feature of Video2me is capable to add text, reduce GIF size, adjust the speed and lots more. This is the best choice if you want to own a single app for handling both video and GIF editing.