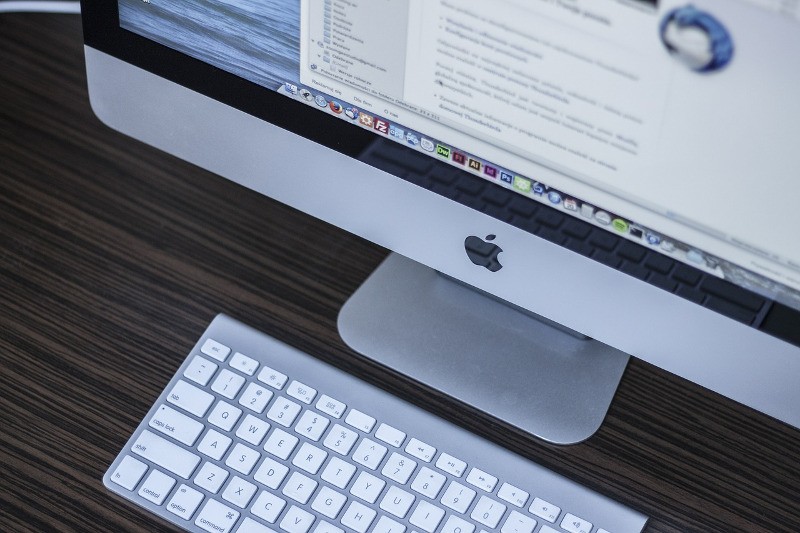 Instead of accessing inbox from the native web-based email client, some people prefer to use a desktop-based email client app for some reasons. If you are on the list, then you should consider some apps I am going to mention.

Most desktop email client apps have the capability to handle multiple accounts. The native function of this kind of app is not different to web-based ones. But, they mostly more feature-rich and support additional add-ons to let users getting the more out.

I’ve explored the existing desktop-based email client apps and got the following list. 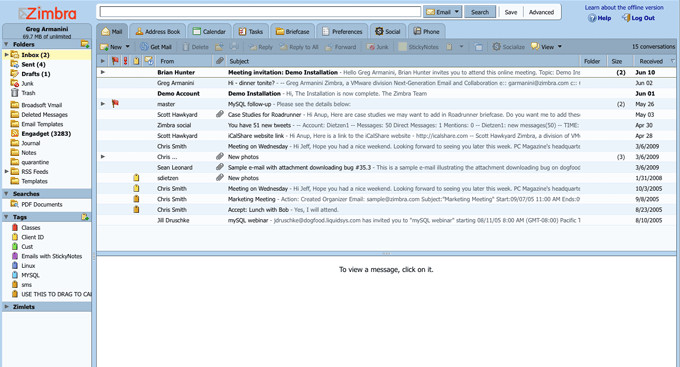 Zimbra is a famous name in the open source community for its email service. You can build your own email server complete with the client app using Zimbra. But, if you just need the desktop client app to organize your existing email account in Gmail or Yahoo, Zimbra is also capable to handle it. You can get the Zimbra desktop email client app for your various operating system, whether it’s Windows, Mac or Linux.

With Zimbra, you can also manage your tasks and contacts. Zimbra also comes with an integrated email search engine which enable you to quickly filter select messages matching with their query parameters. This desktop email client app also support for add-on to accomplish more tasks. 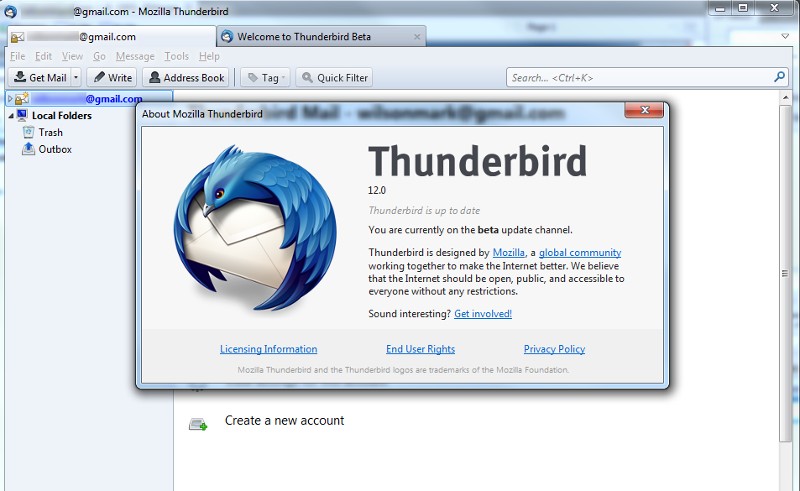 Another famous name in the open source scope, Thunderbird is a cross-platform, open source desktop-based email client app developed by the community at Mozilla. This app has been around for more than ten years and still the first choice for open source enthusiasts, although its development is now being complicated. Thunderbird supports two major email protocols POP 3 and SMTP.

You can also use Thunderbird as a chat client for your Yahoo, Twitter, and Google Hangouts. Additional add-ons are supported by Thunderbird. You can use this app for your Windows and Mac, as well as Linux desktop.

Mailbird may be is the best desktop-based email client app in the market. It’s feature-reach and powerful. But, sadly, the app is only available for Windows devices. No Linux and even Mac (until now). Mailbird is more than just an email client app. There are several messaging apps that are also supported by this app, including WhatsApp, WeChat to Facebook.

Mailbird is also great to manage your project. The app can also be integrated with several services such as Slack, Dropbox, Google Calendar and many others. Interestingly, they are available by default. Mailbird comes with several pre-built themes and flexible layout customizations. Its touch support interface enables an end-user to swiftly process emails on a mobile device too. Maildbird is a freemium app. Although its free version is more than enough to cover your needs, you may want to upgrade to the premium account to get something more. 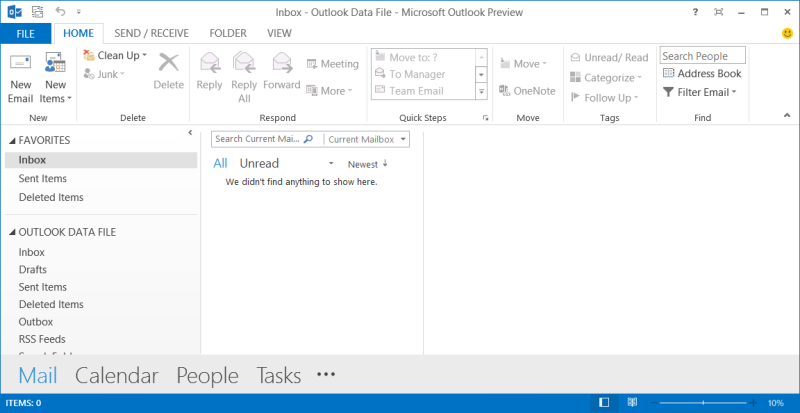 Everybody knows Microsoft Outlook I guess. This is a part of Microsoft Office suite. This means, you need to pay for a license before using this app. Microsoft Outlook is available for Windows and Mac and it’s also not just an email client app, but can also be used for arranging schedule via its calendar feature. Another usage of this app including task manager, note-taking, contact manager, and journal.

To get the more out of Microsoft Outlook, you can also install additional add-ons. The Microsoft’s product has been widely-used by many office workers and business men around the globe. 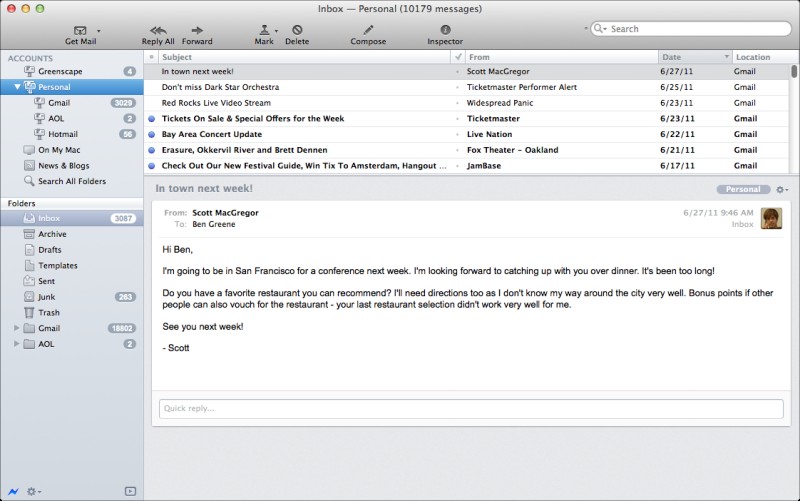 Another proprietary-only app. Postbox is a feature-rich email client that is best suited for all professionals. One of its prominent features is Anti-Tracking to prevent pesky salespeople from knowing if, and when, you open a message. You can also set your best signature and Postbox has some ready-to-use templates that you can use.

The downside of Postbox is that you need to spend more money for its features. You can actually download this email client for free but with less features. If you are looking for a professional desktop email client app — no matter the cost — then Postbox is one of the best choices. 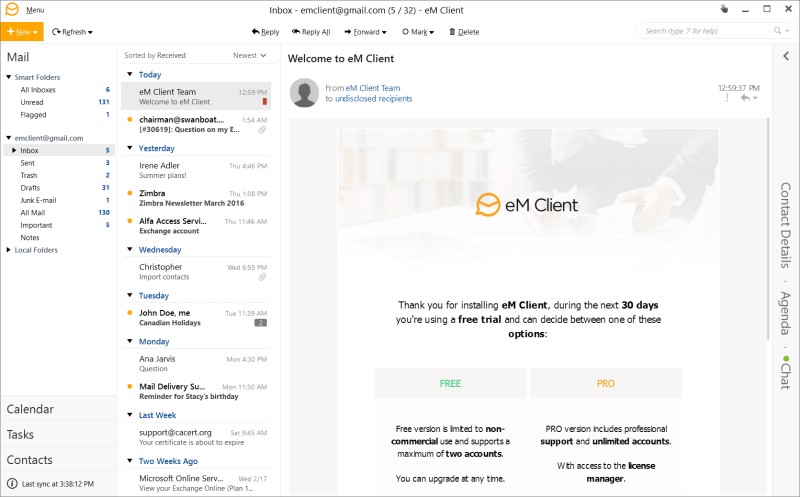 If you have a touch screen laptop and is looking for a desktop email client app to maximize it, then you can turn to eM Client. This app is only available for Windows. Has a pretty interface, eM Client also comes with a numbers of features to let you accomplish more tasks. The major email services like Gmail, Outlook, iCloud and Exchange are supported by eM Client. Free version of eM Client is available but if you need to get more features you can also upgrade to the premium version. 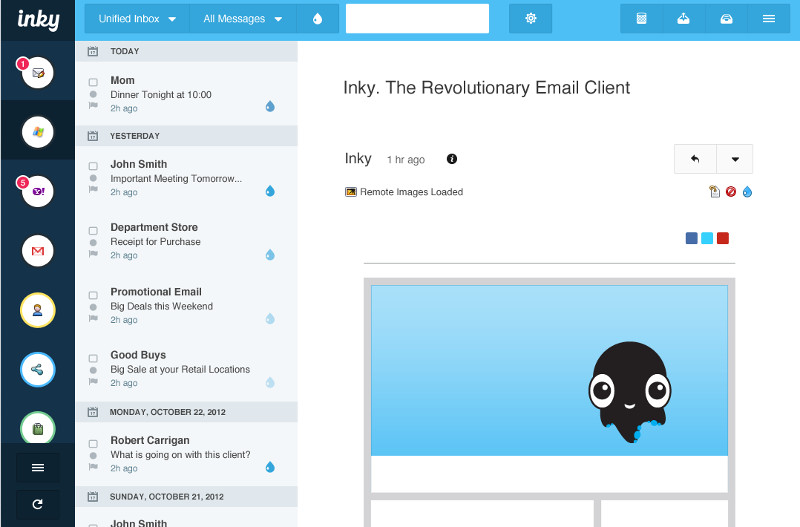 With the exception of Linux, Inky is also a cross-platform desktop client app that good to be used for business. Apart from desktop, Inky also offers email client app for mobile devices such as Android Smartphone and iPhone. Interestingly, Inky comes with a sync feature. It means the messages you have read from desktop app will be marked as “read” in the mobile devices.

Other handy feature of Inky include smart sorting to enable you arrange emails based on their relevance which enables you to process important and related emails in an easy manner. 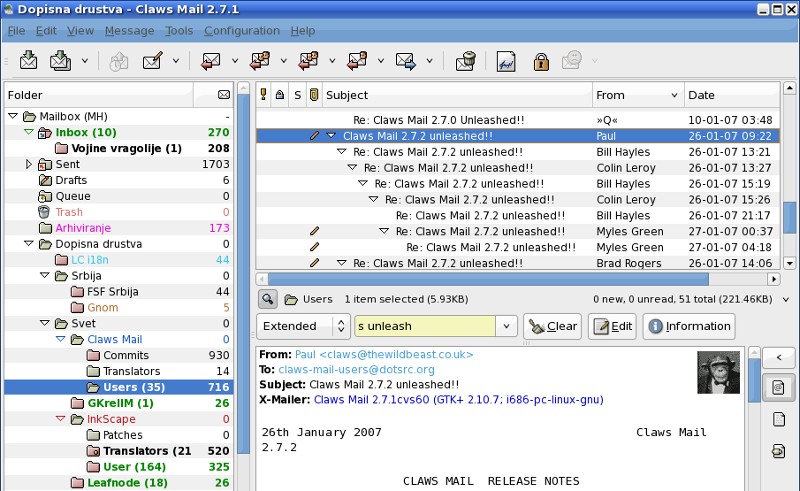 Completely free. Claws Mail is a open source desktop email client that is built using GTK+. All major Linux distros such as Ubuntu SuSe, Debian and Slackware are supported by this software. Additionally, you can also use this software for your Windows desktop. Instead of offering many features, Claws Mail focused on delivering messages to your desktop. If you have a long conversations email, it will be displayed as a shorter thread. To accomplish more tasks with Claws Mail you can also install additional add-ons. 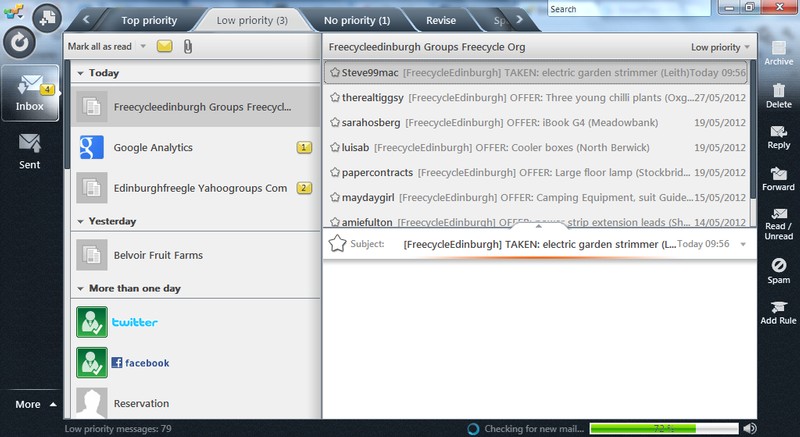 Simple but handy enough. It’s worth for giving a try to EmailTray. But, this desktop email client app is limited to Windows only (Android is also supported). If you only need a desktop app to open your Gmail or Yahoo! messages, EmailTray is a more than enough. Like other similar app, you can also add multiple accounts to EmailTray. This app also supports major protocols like POP 3, IMAP and SMTP.

Need more? EmailTray also offers a password protection for email database to prevent unauthorized access on shared computers. Notification is also something that is offered by this app. 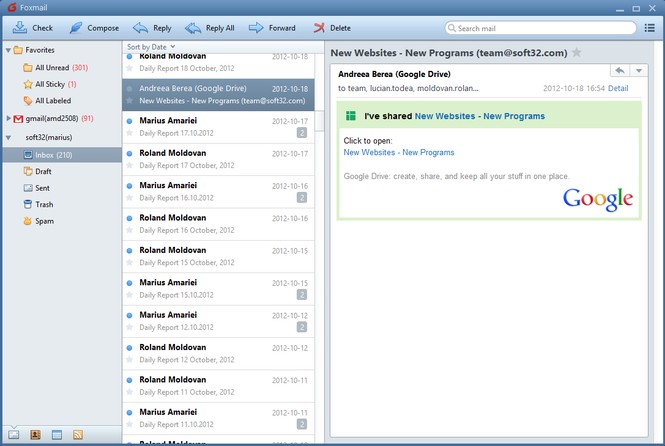 You have to be a Windows or Mac user to use this desktop email client. Foxmail has a capability to preview an attachment to quickly check the content in a glance look. Although it has a minimal features, but there is no bad to a give try.

Other cool feature of Foxmail that not every email client app has is the capability to delay the message before it’s really be sent. The feature is similar to Gmail’s. This feature will be useful if you accidentally sending a message to a wrong destination. Once you pressed the send button your message will be hold for some seconds before it’s truly sent. So you can pull it back once realized you typed the wrong address. 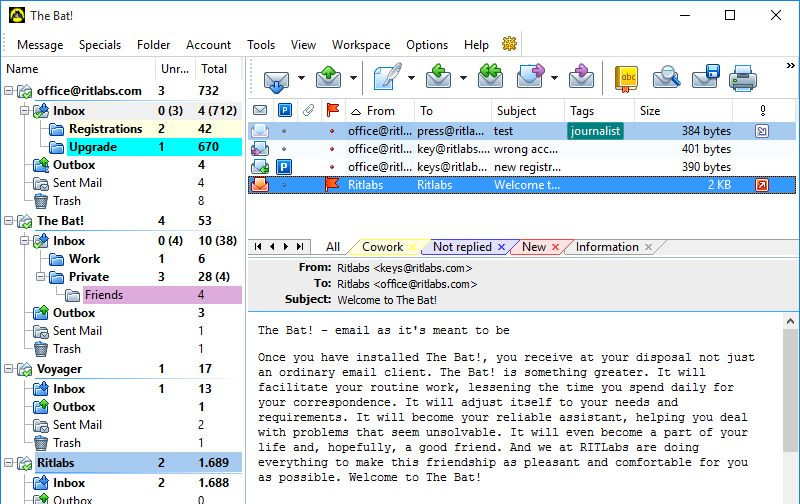 Describing itself as the best secure email client, The Bat is another email client developed only for Windows. No other platforms are supported. With this email client you can easily send encrypted key-based emails. It can also handle unsafe attachments to keep your system clean and uninfected. Often sending similar emails to your colleagues? You can also maximize the available templates to speed up your email processing routine.

According to a brief description on its site, The Bat has been existing since the year of 1998. It’s long enough. 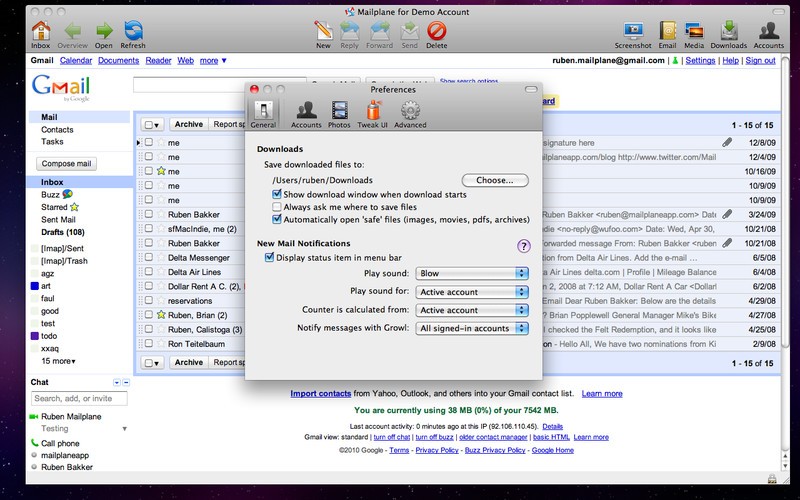 This email client tend to be suitable for those Gmail avid with multiple Gmail accounts. Designed exclusively for Mac, Mailplane helps you organizing your Gmail accounts with a simple and user-friendly tabbed interface. This email client comes with a notification feature that is directly integrated with the Mac bar which displays an unread count of new emails.

Mailplane is a paid app but you are given a 15-days free trial before deciding to continue using it or not. You can also preview email attachments and annotate them using your favorite Mac app right from within the email client. 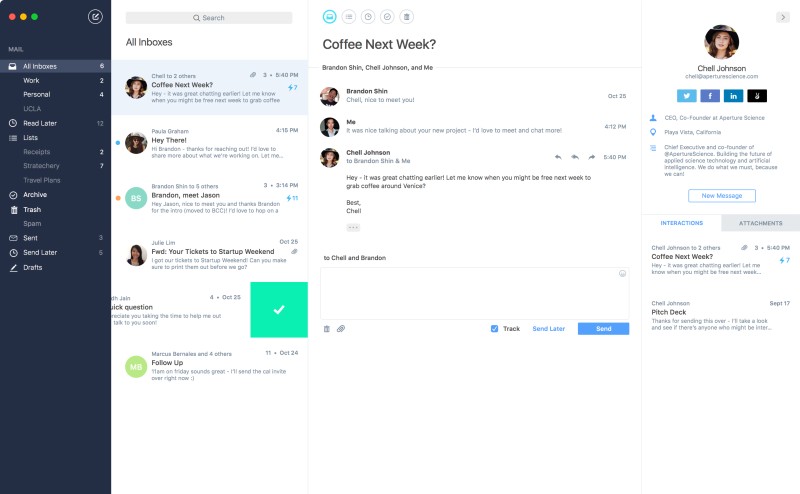 Another Mac only email client, Polymail comes with a clean and pretty interface. This email client is also equipped with some handy features to ease your work. Email Tracking for instance. This feature instantly informs you whenever the sent email is opened at the recipient’s end. Another prominent features including Sending Later and Undo Send.

Polymail is a freemium app. If you are not enough with its standard features, you can upgrade for the premium license which is started from $9 per month. Additional features of premium account includes Activity Feed, Message Templates and Auto BCC. 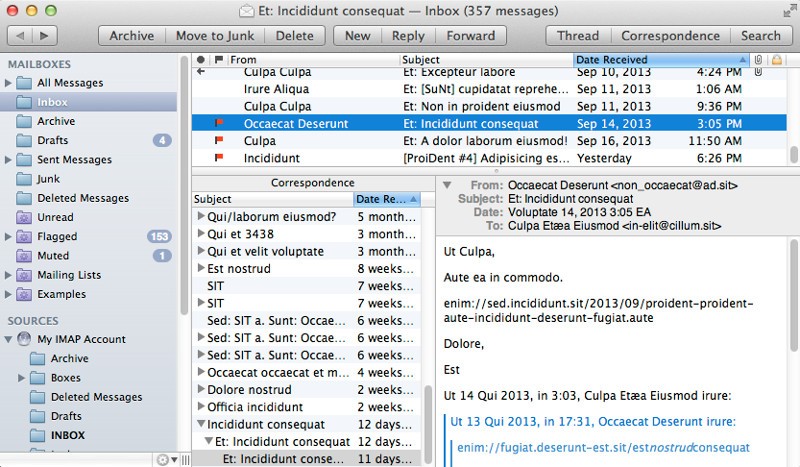 Again. This email client is built for Mac only. MailMate is also agreat tool for organizing your inbox. With no miscellaneous features, MailMate is hardly easy to use. There is a smart inbox feature to ensure you get the right email in the desired section for easy processing. Other handy feature is rich notification system which is tightly integrated with MacOS. MailMate is a completely free app. 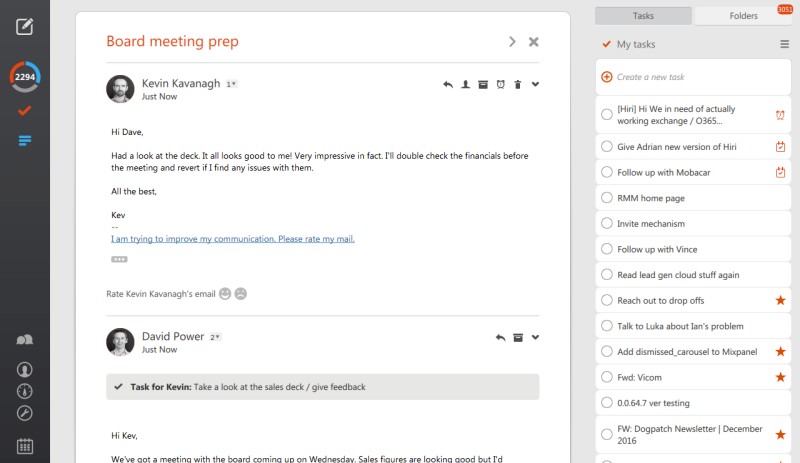 Last but not least. There is another cross-platform desktop email client app that is really worth to try. Hiri — which is available for Windows, Mac and Linux — aims to change the way you use email. It’s designed to cut down the amount of time you waste on “unactionable” emails. Hiri comes with several handy features. Some of its notable features include a side-by-side interface, reminders for important emails, blazingly fast email searches, and a feature-complete built-in calendar

Hiri is a paid app, you need to buy before using it. But, if you interested, you will be given a 30-days of trial.

We have curated some of the best Ghost themes to use on your blog so that you don't need to conduct the research from scratch yourself.
Read more
Professional

Productivity is a significant concern for businesses and professionals as everyone wants to achieve more with less. But distractions and blocks can keep you...
Read more
Professional

Working from home is the new normal now since the pandemic. Companies are striving to keep their employees productive while they continue to work from home.
Read more
Software

When you are attempting to utilize OKR software to its most absolute advantage, you will find that there are exceptional tools that you can...
Read more
Professional

The Most Important Curiosity Skills

Curiosity - maybe curiosity is what made you click on this article in the first place. But what is curiosity, and how can you...
Read more
Professional

7 Ways to Know if You Have a Great Business Idea

Starting up a business takes time and effort, and finding a business idea that is both feasible and viable necessitates extensive self-reflection. Better yet,...
Read more