HomeCameraCanon M5 vs Sony A6500: Specs and Features Comparison 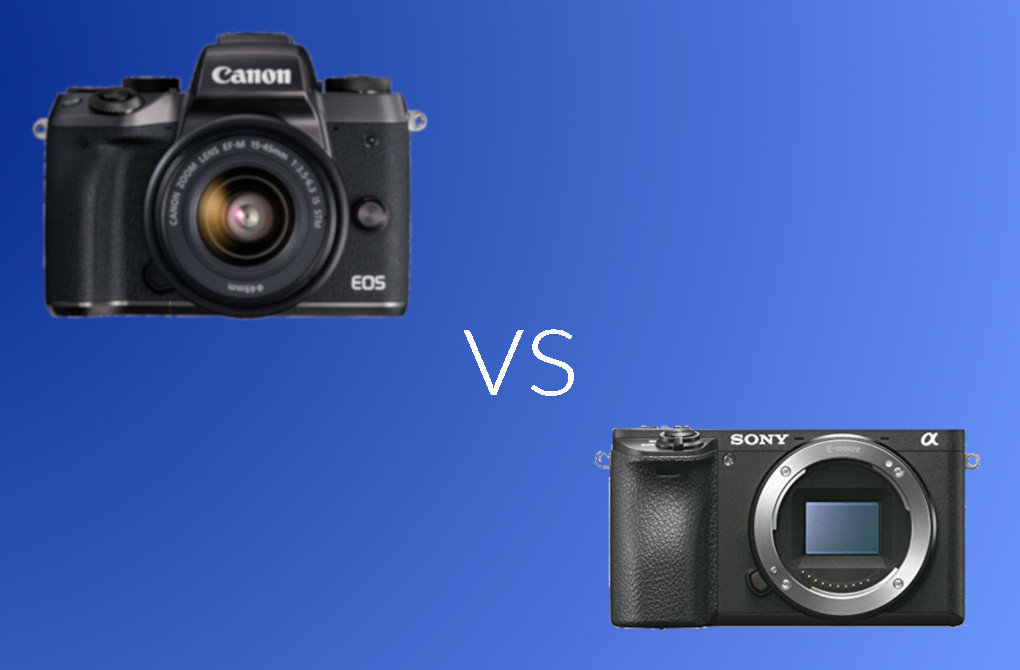 Canon M5 and Sony A6500 are two mid-range mirrorless cameras. In the market, these two cameras have a comparable prices so it reasonable enough to compare them. Sony A6500 has a bit more expensive price compared to Canon M5.

What about the specs and features? That’s what we are going to cover here.

Take a look at the table we have created below to compare the specs offered by Canon M5 and Sony A6500.

Canon M5 is a 24.2 MP mirrorless camera that uses DIGIC 7 as the image processor. The sensor used on this camera is the same as the one used on Canon 80D. Sony A6500 also has a 24 MP sensor with BIONZ X as its image processor. Although both cameras have the same sensor resolution, the different story goes to size in which the sensor size of Sony A6500 is larger than Canon M5’s. Regarding the sensor, we are going to cover it later on the next section below.

Exposure is the basic photography concept you have to master at. Regarding the exposure, there are three camera settings affecting how much light caught by the camera sensor. They are ISO, aperture and shutter speed. The combination of these three settings is often called exposure triangle. Due to the importance of these three settings, they should be your major concern when taking some look at camera specs. While aperture is determined by the lens, you just need to see the ISO range as well as the shutter speed range of the camera you are interested to.

You will find how more autofocus points and higher frame useful when you use your camera to take the pictures of wild animal or sport events in which you will deal with moving objects.

As mentioned on the beginning of this article, one of the advantages of Sony A6500 over Canon M5 is regarding the video recording capability. Sony A6500 has the capability of recording 4K videos (3840 x 2160) while Canon M5 has no same capability. The maximum video resolution can be recorded by Canon M5 is 1920 x 1080. Furthermore, Sony A6500 also offers a video stabilisation to help preventing your videos from being shacked.

Regarding the battery life, Sony A6500 is also one step ahead Canon M5. One a single charge, the battery of Sony A6500 can fire up the camera to take about 350 images compared to 295 belong to Canon M5.

The sensor of Canon M5 and Sony A6500 has the same resolution of 24 MP, but there is a difference in terms of size. The sensor of Sony A6500 is about 11 percent larger than Canon M5. You can compare the sensor size of these two cameras on the image we have created below. 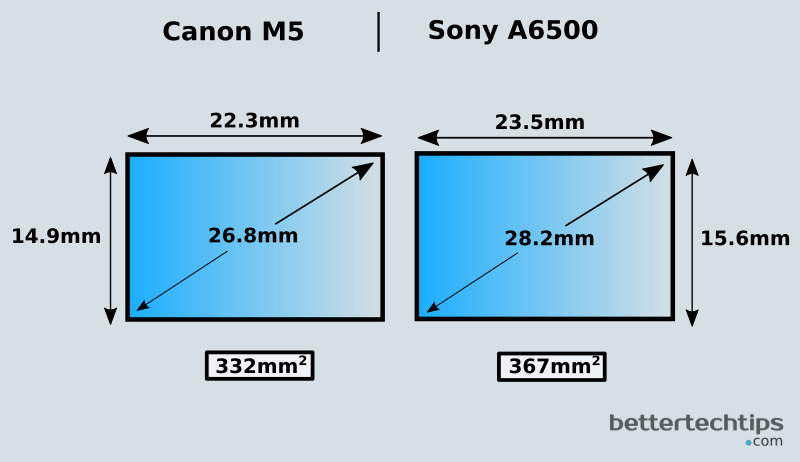 Canon M5 is a mirrorless camera that adopts a DLSR style. It has a comfortable handle just like DSLR cameras, with an electronic viewfinder lies on the center area of its body. Meanwhile, Sony A6500 has a more compact design, bust slightly wider. Sony A6500 also features and electronic viewfinder which lies on the right side of its body (or left side from the photographer point of view).

Although the overall body dimension of Sony A6500 is smaller than Canon M5, it is about 6 percent heavier. Take a look at the images we have created below to compare the body dimension between Sony 6500 and Canon M5. 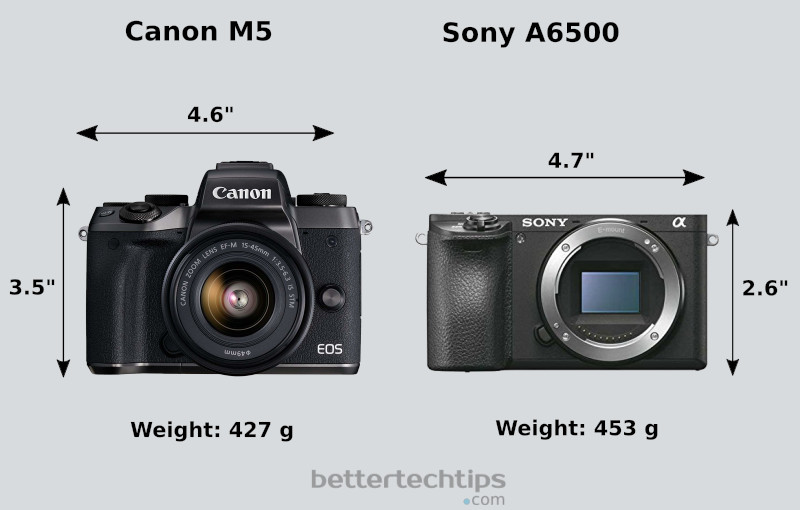 Canon M5 and Sony A6500 are two mid-range mirrorless cameras. These two cameras offer plenty enough of autofocus points as well as high frame rate, making them a great gear to take the picture of moving objects. Sony A6500, however, has some advantages over Canon M5. One of which is that Sony A6500 has the capability of recording 4K videos while Canon M5 is only capable of recording videos with the maximum resolution of 1920 x 1080.

Overall, the specs of Sony A6500 is better than Canon M5. Sony A6500 has a larger sensor size, more autofocus points, higher frame rates to capture more images on a continuous shooting mode. One more thing, Sony A6500 also has a higher score on DxOMark.