HomeCameraCanon M6 vs Sony A6000: Which Mirrorless Camera is The Better? 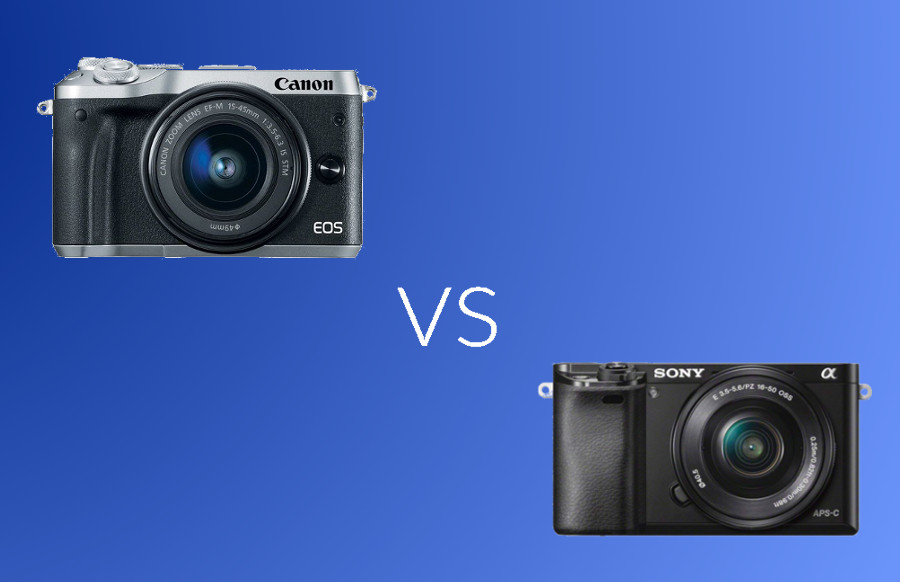 Speaking of Canon M6 and Sony A6000, these two cameras are often compared since they have the comparable specs and price. Both Canon M6 and Sony A6000 are mirrorless interchangeable lens camera (MILC). Meaning that you can replace the lens to tailor your photography needs, much like you usually do with your DSLR camera. If you want to figure out which is the better between these cameras, read on.

As usual, we have created the table below to makes it easy for you in comparing the specs of these cameras.

Commonly, the first spec seen by aspiring camera buyer is the sensor. The matter of sensor, both Canon M6 and Sony A6000 adopt the APS-C sensor, but the sensor of Sony A6000 has a larger size than Canon M6’s. More detailed about sensor will be covered on the next section below.

One of the advantages of Sony A6000 over Canon M6 is that Sony A6000 is better for taking the pictures of moving objects. Two technical aspects behind this are because Sony A6000 has more more autofocus points and frame rates. The more autofocus points a camera has, the better the camera in detecting the moving objects to help you get the focus point of the object are taking the photos of. While frame rates determine the amount of the photos captured by the camera on a single shutter press on the continuous shot mode.

Both Canon M6 and Sony A6000 have no capability of recording 4K videos. The maximum video resolution they can record is 1920 x 1080 with frame rates 60 fps. Be it Canon M6 or Sony A6000 offers Wi-Fi for wireless photo transfer and other types of Wi-Fi implementations. Especially Canon M6, this camera also offers Bluetooth.

As mentioned earlier above. One of the physical differences between these cameras is viewfinder. Sony A6000 comes with a built-in electronic viewfinder in case you are the sort of photographer who can’t live without it. Canon M6, on the other hand, doesn’t offer a built-in electronic viewfinder, but you can install an external viewfinder as an additional accessories in case you really need it. Speaking of battery life, Sony A9 is slightly better than Canon M6. On a single charge, you can use Sony A6000 to take about 360 photos, compared to Canon M6 which only capable of taking about 295 photos per charging.

Sensor is one of the most vital components of the digital camera system. It is the component that detects the object you want to take the photos of. Choosing a good camera sensor is not about megapixel. Megapixel is matter, but you should also notice the size of the associated sensor. 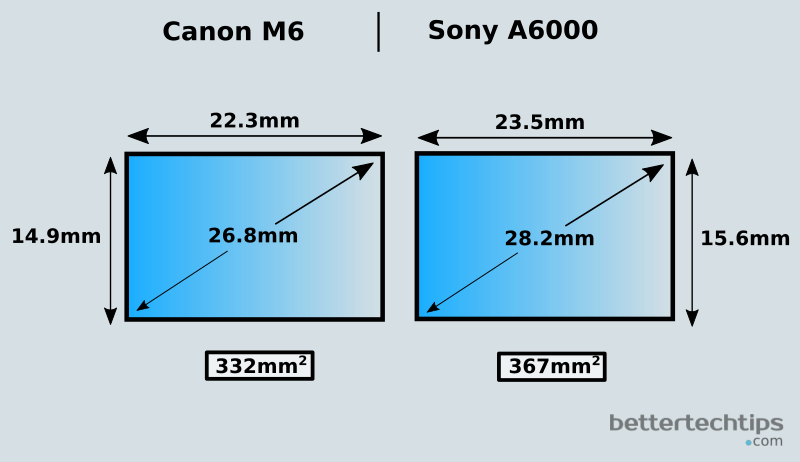 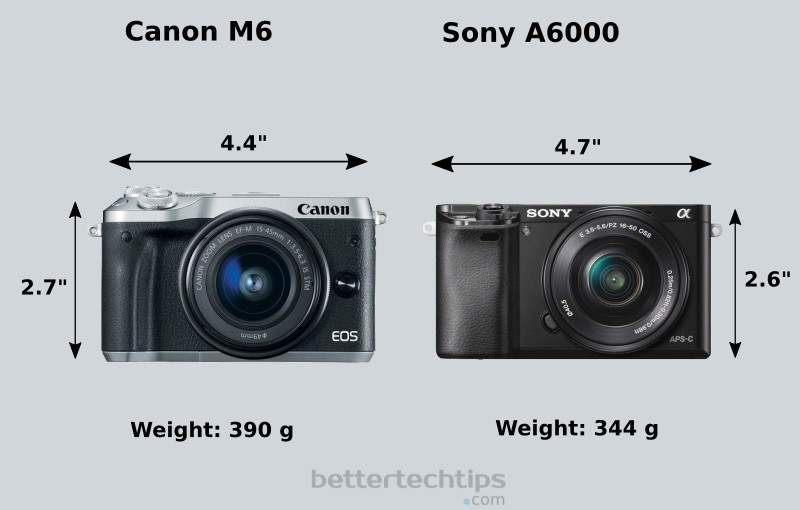 You are going to use your camera to take the pictures. So, it reasonable enough if you are curious what the pictures taken using Canon M6 and Sony A6000 are look like. To help save you time in conducting an online research, we have explored Pixabay — our favorite resource to free images — to find the examples of the pictures taken using Canon M6 and Sony A6000. Pixabay makes it possible to filter the images catalog by camera model. We have also added the EXIF data to allow you identifying the used lens on each photo since lens is also a key factor affecting the image quality other than camera sensor.

Be it Canon M6 or Sony A6000 can be categorized as a mid-range mirrorless. The overall specs of these cameras are not much difference, but if your intention of using your camera is for taking pictures of moving objects, we will suggest Sony A6000 instead of Canon M6 given that Sony A6000 has more autofocus points and more frame rates. Other consideration is the DxOMark score.

Sony A6000 has a higher score on DxOMark than Canon. DxOMark is not the word of God, at least you can use it as the parameter since DxOMark tests the camera first before giving a score. But overall, be it Canon M6 or Sony A6000 is a good mirrorless camera, with a very compact body. They can be  great gear for traveling thanks to their light of weight.