Nikon D5 vs Sony A9: Which Full Frame Camera is Better?

HomeCameraNikon D5 vs Sony A9: Which Full Frame Camera is Better?

Nikon D5 vs Sony A9: Which Full Frame Camera is Better? 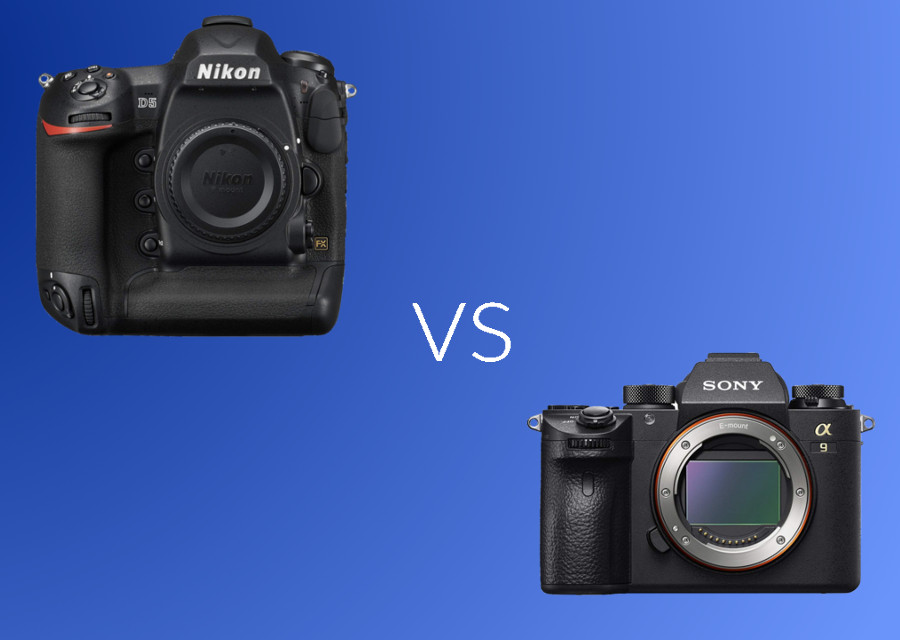 Two full frame camera models that worth to consider: Nikon D5 and Sony A9. These cameras have been used by many professional photographers around the world. Quick question, which is the better between them?

Both Nikon D5 and Sony A9 are flagship products. D5 is the flagship DSLR from Nikon while A9 is the flagship mirrorless from Sony. By the time this article is written, these two cameras still relatively new. D5 was announced by Nikon in January 2016 as the successor of D4S while A9 was announced by Sony in April 2017. One thing you need to know, A9 is not the successor of Sony’s A7 line of mirrorless cameras.

Nikon D5 and Sony A9 are different systems so you will find several significant differences especially the physical body as well as battery life. As a DSLR camera, Nikon D5 has certainly a larger body than Sony A9. So is battery capacity. Along with Canon 1D X Mark II, Nikon D5 and Sony A9 are often compared. Not just because they adopt a full frame sensor. Another reason why these cameras are often compared is because they have not relatively too difference prices.

As the updated version of D45, Nikon D5 certainly has some new things to offer. But what?

Some improvements applied by Nikon to D5 are ISO range, auto focus, new image sensor and new image processor. What about those features compared to Sony A9?

Let’s start from ISO range. On this section, Nikon D5 is better than Sony A9 as it has a longer ISO range. The ISO range offered by Nikon D5 is 50 – 3280000 while Sony A9 is 50 – 204800. Since Nikon D5 and Sony A9 have a large sensor size, high ISO might is not too crucial. In theory, cameras with a large sensor have a better low-light sensitivity. Meaning that you won’t need to set the ISO of your camera to extremely high to get a brighter image. But still, high ISO will be useful in certain situation.

Take a switch to the shutter speed. You will find that there is a significant enough different in terms of shutter speed range between Nikon D5 and Sony. Which camera offers higher shutter range? The answer is Sony A9. Sony allows you to set the shutter speed up to 1/32000 while the maximum shutter speed offered by Nikon D5 is 1/8000. Camera with a higher shutter speed should be better at capturing moving objects, but it takes a complex enough settings depending on how fast the the object movement. Speaking of this photography need (photographing moving objects) another aspect you need to notice is the auto focus points. Again, Sony A9 is better than Nikon D5 as it has more auto focus points, 693 compared to 153 belong to Nikon D5. In addition, Sony A9 also has more frame rates. Meaning that it captures more images on a single shutter press on the continuous shot mode.

Two things that Nikon D5 is better than Sony A9 is the display and battery life. On the display section, Nikon D5 offers a 3.2-inc LCD screen that supports touch operation. The screen of Nikon D5 has the resolution of 2359000 which is excellent to preview the photos you have taken. On the other hand, Sony A9 offers a 3-inch display which also supports touch operation. The difference is that Sony A9 offers an articulated display in case it is matter for you.

The screen of Sony A9 comes with the resolution of 1440000. Not as high as Nikon D5 but it is more than enough for previewing the photos you took with a very sharp quality. One thing missed by Nikon D5 is wireless connectivity. It doesn’t offer either Wi-Fi or Bluetooth, while Sony A9 offers both wireless connectivity.

The battery of Nikon D5 is capable of capturing about 3,780 photos per charging. Far more compared to Sony A9 which only capable of capturing about 650 images per charging. The matter of video recording capability, both Nikon D5 and Sony A9 are capable of recording 4K videos. This is certainly a good news if you often use your camera to record videos other than taking photos. Speaking of recording videos, a simple feature yet handy you will probably need is video stabilisation which is available on Sony A9 while Nikon D5 doesn’t have one.

One more thing, Sony A9 is one of the mirrorless cameras that has a viewfinder feature in case you can’t live without this feature. Sony A9 offers an electronic viewfinder with the diopter of -4 to +3 and magnification of 0.78. What about Nikon D5?

Nikon D5 is a DSLR camera so it clearly has a viewfinder (optical). Viewfinder is the integral part of a DSLR system. The viewfinder of Nikon D5 itself has the diopter of -3 to +1 with 0.72 magnification. 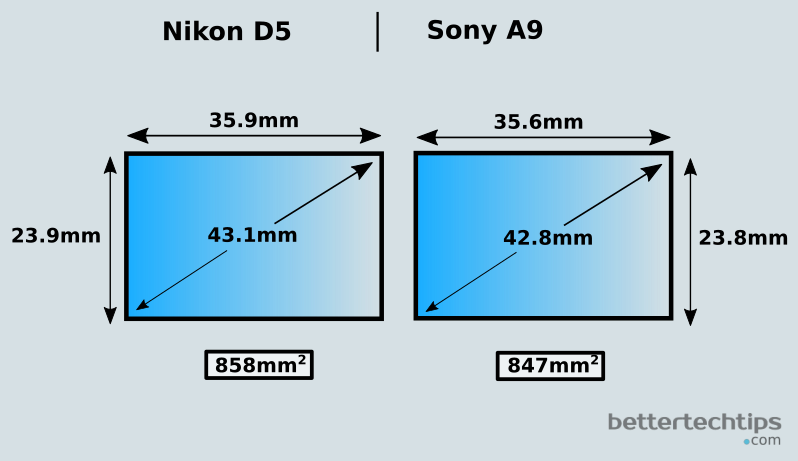 As a DSLR camera, Nikon D5 is certainly has a larger body than Sony A9. Overall, the body of Nikon D5 is about 52 percent larger than Sony A9. Nikon D5 comes with a square design. It has the same width and height of 6-inch. There are so many buttons you will on the rear side of this camera. Take a look at the images below to see the body comparison between Nikon D5 and Sony A9. 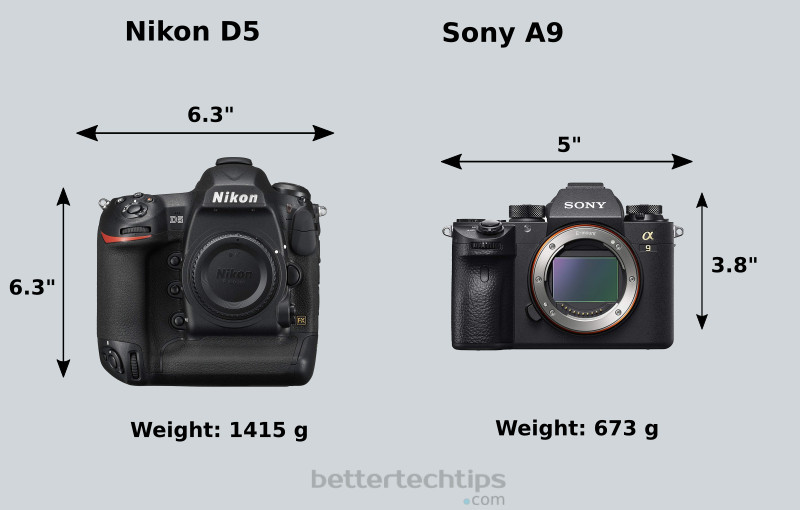 After analyzing the specs above, you might be wondering, what kind of photos these cameras can generate?

Thanks to their large sensor, both Nikon D5 and Sony A9 are capable of handling nearly all types of photography needs. Just keep in mind that in addition to sensor, the lens you use also affects the end results of the photos you take. Following are the examples of the photos taken using both Nikon D5 and Sony A9, complete with the EXIF data. All photos below were taken from Pixabay.

Both Nikon D5 and Sony A9 are high-end cameras aimed at professional photographers. They come with massive specs that capable of handling nearly all types of photography. Whether you want to take pictures of Milky Way, landscape or sport events, both cameras are capable of doing so. Just tailor the lens according to your needs.

One thing you need to remember. Nikon D5 and Sony A9 are different systems. Nikon D5 is a DSLR camera while Sony A9 is mirrorless camera. If you wish for a camera with a longer battery life then DSLR should be the option you opt to. In this case, your choice is Nikon D5. Which is the better between Nikon D5 and Sony A9 will depend on your photography need. If you need to take pictures of moving objects more often then Sony A9 is a better suited option since it has more auto focus points, more frame rates and longer shutter speed range.

Overall, be it Nikon D5 or Sony A9 is a great camera. Capable of recording 4K videos, offer high specs. Another parameter you can take as the consideration is the DxOMark score. Nikon D5 has the score of 88 on DxOMark while Sony A9 has the score 92.