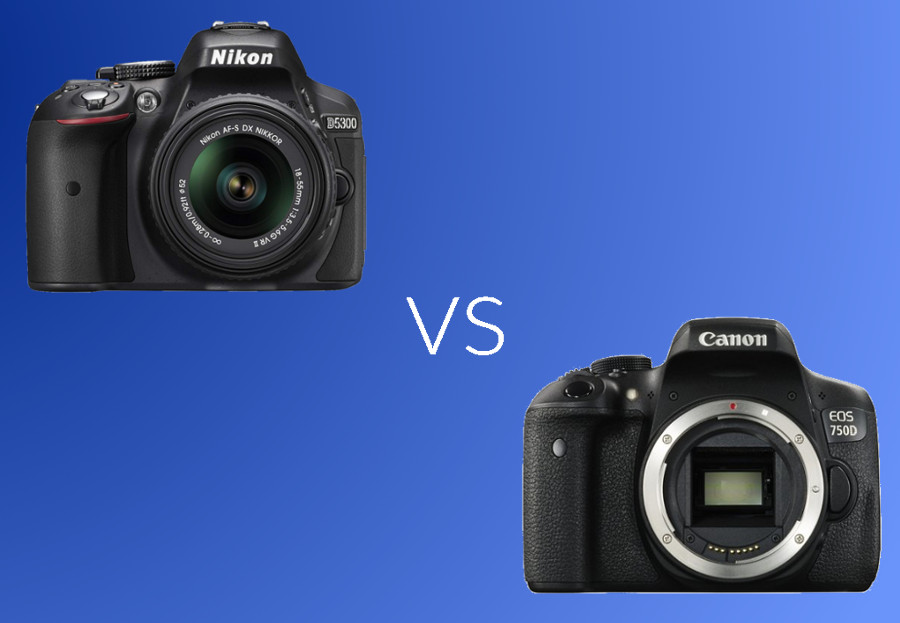 Nikon D5300 and Canon 750D are two of the DSLR cameras that compete on the entry-level segment. These cameras have relatively equivalent specs so comparing them is make sense enough. There are no significant differences between these cameras, but which camera you should buy?

Nikon D5300 and Canon 750D are great DSLR cameras to start your photography hobby. They can be the great gear to learn basic technical aspects of photography before stepping further if you want to be a professional photographer. Nikon D5300 itself is the successor of D5200. Compared to its predecessor, this camera has a longer battery life (up to 600 shots). It also comes with Expeed 4 as the image processor that consumes less power. Even so, Nikon D5300 not the latest version. Currently, this camera has been replaced by the newer version of D5500 which was announced by Nikon in January 2015.

Meanwhile, Canon 750D (or also known as Rebel T6i in the Americas) is a 24 MP entry level DSLR camera released by Canon in February 2015. This camera was announced together with 760D. Both Canon 750D and 760D adopt some features from Canon 70D which has a more expensive price. Canon 750D uses DIGIC 6, an image processor from Canon with 14-bit processing. To start this comparison, please take a look at the table we have created below.

Not everyone, but the vast majority of people will look at the ISO section when reading the specs of the camera. For cameras with smaller sensor like Nikon D5300 and Canon 750D, ISO is important enough especially if you often use your camera to take the pictures on low light condition. Nikon D5300 comes with the ISO range of 100 – 25600 while Canon 750D has only 100 – 12800. But, the ISO of Canon 750D is extendable. You can extend the ISO to 25600 in case you need to.

On the photography concept, ISO has a close correlation with shutter speed and aperture. The combination of these settings is known as exposure triangle. While aperture is determined by the lens you use, the other aspect you can notice at from your camera other than ISO regarding the exposure triangle is shutter speed range. Both cameras offer the same shutter speed range, 1/4000 – 30.0. Not too ideal for capturing moving objects with an extremely fast movement, but if you want to shoot in a long exposure mode — like taking the photos of waterfalls — these cameras also offer a bulb mode in case 30 seconds is still too fast.

Nikon D5300, however, is a bit better than Canon 750D at photographing moving objects since it comes with more autofocus points (see the table above).

The screen of Canon 750D has the pixel density of 1040000 dots while Nikon D5300’s screen is only 1037000 dots. Both cameras offer live autofocus. This feature will be useful when you need to take the pictures of an object from an extremely low angle. By using this feature you don’t need to get on your knee. The articulated screen offered by these cameras will make it even easier for this sort of photography task.

Since Nikon D5300 and Canon 750D are entry-level cameras, you better don’t expect too much on video recording capability. They are not capable of recording 4K videos which seems is being a trend these days. The maximum video resolution these cameras can record is 1920 x 1080. Nikon D5300 is slightly better on this area. With the same video resolution, the videos recorded using Nikon D5300 is a bit smoother since Nikon D5300 offers the frame rates of 60 while Canon 750D offers only 30 fps (frame per second).

On the context of digital camera, sensor is the component that detect the object you want to take the pictures of. It is one of the determinants of image quality generated by cameras. A larger sensor is better since it has better low-light sensitivity, wider dynamic range and richer color-depth. Nikon D5300 and Canon 750D themselves use a crop sensor. 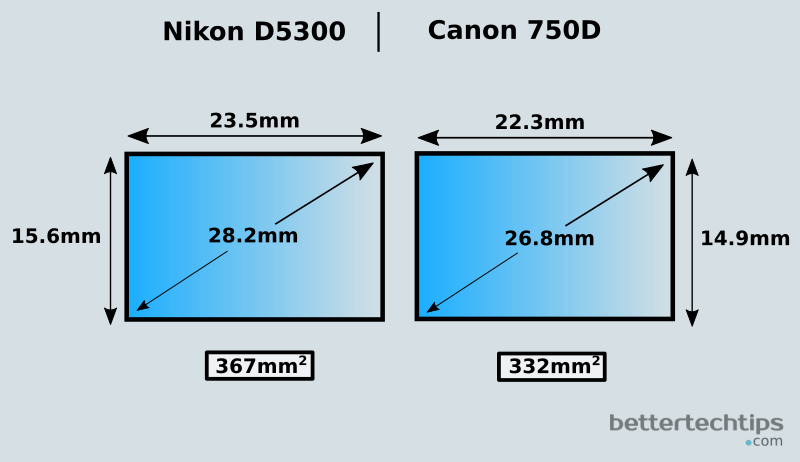 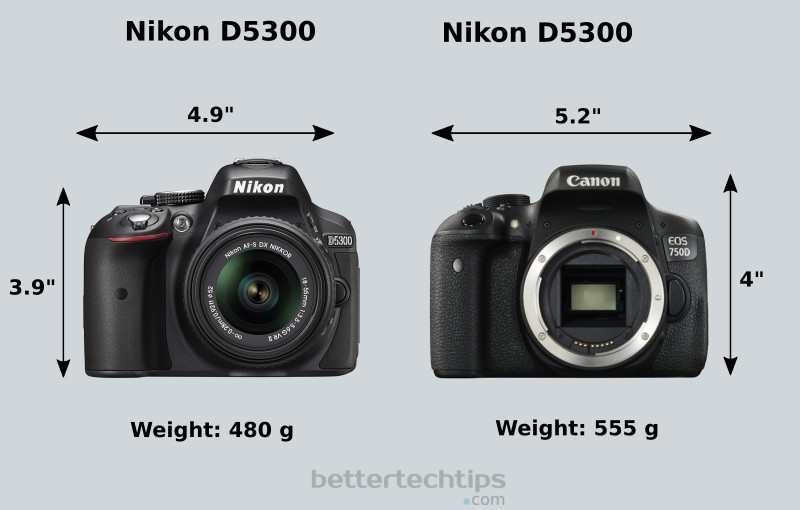 There are several factors affecting the image quality generated by a camera. In addition to sensor, lens is another aspect that affects the end results the of images you took. After analyzing the specs and features of these cameras from the table and descriptions above, you have probable made a choice which camera you eventually want to buy, but still have a doubt since you haven’t seen any example of the photos taken using the camera you chose.

There are several resources you can refer to for finding the examples of the photos taken using certain camera model. Pixabay is our favorite resource. To save you time, we have selected the best examples below. We have also added the EXIF data so you can identify the type of the lens used on each photo.

Nikon D5300 and Canon 750D are entry level DSLR cameras. They can be a good start if you want to enter to the photography world by learning basic camera settings and the basic concepts of photography. These cameras have the similar specs. There are some sections where Nikon D5300 is better than Canon 750D. Conversely, there are also some sections where Canon 750D is better than Nikon D5300, but the differences are not significant. As we said, these cameras have the similar specs and features.

For an objective assessment, Nikon D5300 is slightly better than Canon 750D. It is better at photographing moving objects thanks to more autofocus points it has. The test results of DxOMark also tell so. On DxOMark, Nikon D5300 has the score of 83, compared to 71 belong to Canon 750D. However, DxOMark score is not the only parameter you can use before making a purchase of a camera. To get yourself be more convinced, you can also take a look at the examples of photos we have displayed above.