HomeCameraNikon D5500 vs Canon 70D: Which DSLR Camera You Should Buy? 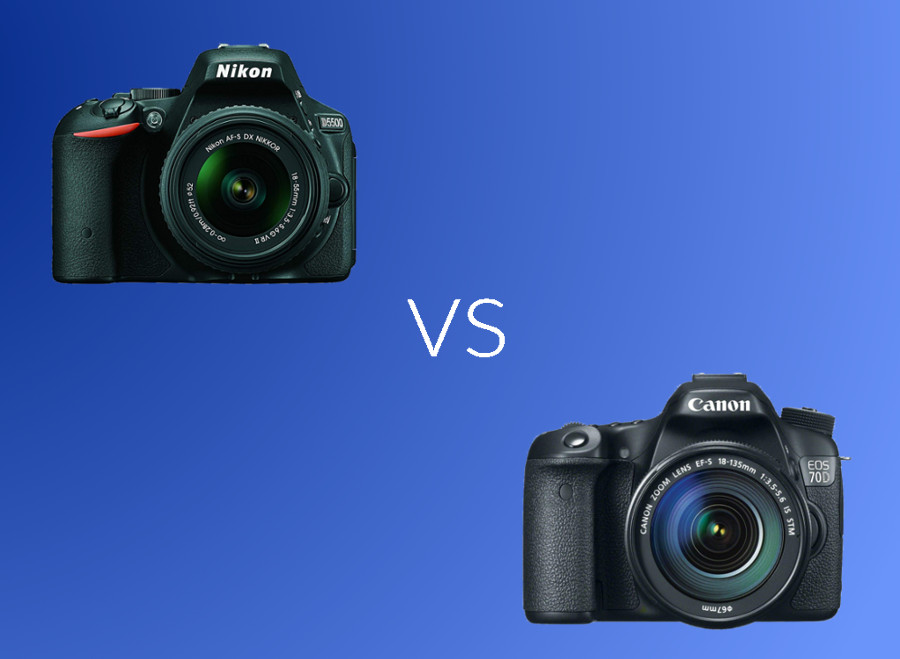 Nikon D5500 comes with some new improvements compared to its predecessor D5300. It is the first Nikon DSLR camera to have a touch screen display feature. Nikon also added an improvement on the body of Nikon D5500 in which it has a slightly smaller body than D5300 thanks to its newer carbon-fiber composite body. It also has a longer battery life than its predecessor.

Same as Nikon D5500, Canon 70D also comes with some new improvements than its predecessor. Canon 70D comes with an improved resolution from 18.1 MP to 20.2 MP. It also has a newer image processor. While Canon 60D uses DIGIC 4, Canon 70D uses DIGIC 5+. Improvement also include autofocus performance which is now faster. While Canon 60D has only 5.3 frame rates, 70D has 7.0. This will ease your job in taking pictures of moving objects.

For standard uses, both Nikon D550 and Canon 70D are equivalent enough. You will feel something different once you use them for photographing moving objects. Well, these cameras are not designed to be a professional cameras so they don’t have advanced specs and features for capturing moving objects with an extremely fast movement. Just for your information, Canon 70D offers a longer shutter speed range as well as more frame rates than Nikon D5500. These two elements are useful for when you use your camera to take the pictures of moving objects. However, Nikon D5500 comes with more autofocus points number than Canon 70D. You can see the differences on the table above.

The matter of ISO, both cameras offer the same ISO range. Higher ISO range is important enough for a DSLR camera with a crop sensor like Nikon D5500 and Canon 70D. You will find how it useful when you have to use your camera on a low-light situation.

One feature offered by Nikon D5500 that is not available on Canon 70D is GPS. Well, it is not a crucial feature but who knows you will need it. Other features like exposure bracketing, white balance bracketing and dust cleaning are available on these two cameras.

Speaking of video recording capability, there are no special features offered by these cameras. The maximum video these cameras capable of recording is 1920 x 1080 aka full HD. However, Nikon D5500 offers more frame rates (60) than Canon 70D (30).

Nikon D5500 and Canon 70D are two DSLR cameras with different market segments. Nikon D5500 is an entry-level camera that is aimed at those who just getting know to photography while Canon 70D is a mid-range camera aimed at photography enthusiasts who need a stepping stone before making a switch to a professional camera with a full frame sensor. 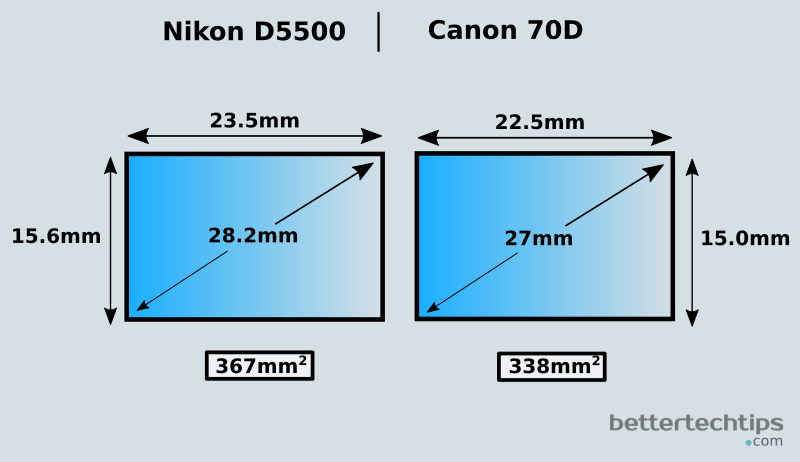 Overall, the body of Canon 70D is about 20 percent larger than Nikon D5500 (as you can see on the images below). In terms of design, there is one thing differing D5500 and Canon 70D.

Canon 70D has an LCD on the top of its body while Nikon D5500 doesn’t have one. The body of 70D is about 80 percent heavier than Nikon D5500. Take a look at the images we have created below to compare the body dimension between Nikon D5500 and Canon 70D. 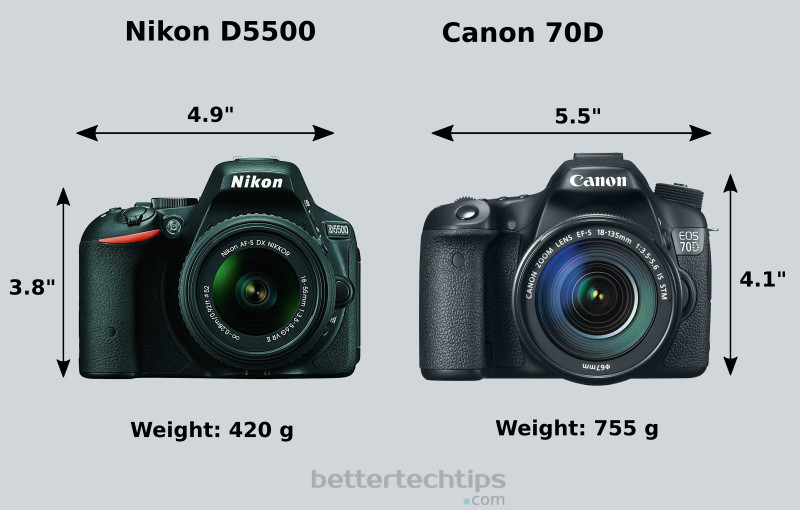 The final purpose of a camera is to generate good quality photos. But, there are several factors affecting the final results generated by a camera. Sensor is surely one of which, but there also other factors including the applied settings and the used lens. There are a bunch of resources you can take advantage of to find free photos. Pixabay is our favorite resource since it allows us to filter the photos by camera model.

As usual, we have selected some of the best examples taken using D5500 and Canon 70D. We have also added the EXIF data of each photo to allow you identifying the used lens type as well as the applied settings.

Nikon D5500 and Canon 70D have a different segment. Nikon D5500 is aimed at beginner photographers while Canon 70D is aimed at those who have been a while in photography and need to upgrade their gear. Even so, as we have mentioned, Nikon D5500 has a slightly larger sensor than Canon 70D. There are some sections where Canon 70D is better than Nikon D5500. For instance, Canon 70D has a longer shutter speed range and more frame rates which is able of capturing more images on the continuous shot mode.

Conversely, Nikon D5500 also has some advantages over Canon 70D. It has more autofocus points than than Canon 70D which is handy when you use your camera to take the pictures of moving objects. Speaking of battery life, Canon 70D has a longer battery life than Nikon D550. On a single charge, you can use Canon 70D to take about 920 images, while Nikon D5500 is only capable of taking about 820 photos per charging.

Overall, both Nikon D5500 and Canon 70D are great cameras. You can also take the DxOMark score (which you can see on the table above) as the additional consideration before making a decision which camera you eventually buy.