HomeCameraNikon D5500 vs Canon 750D: Which DSLR Camera Is Better? 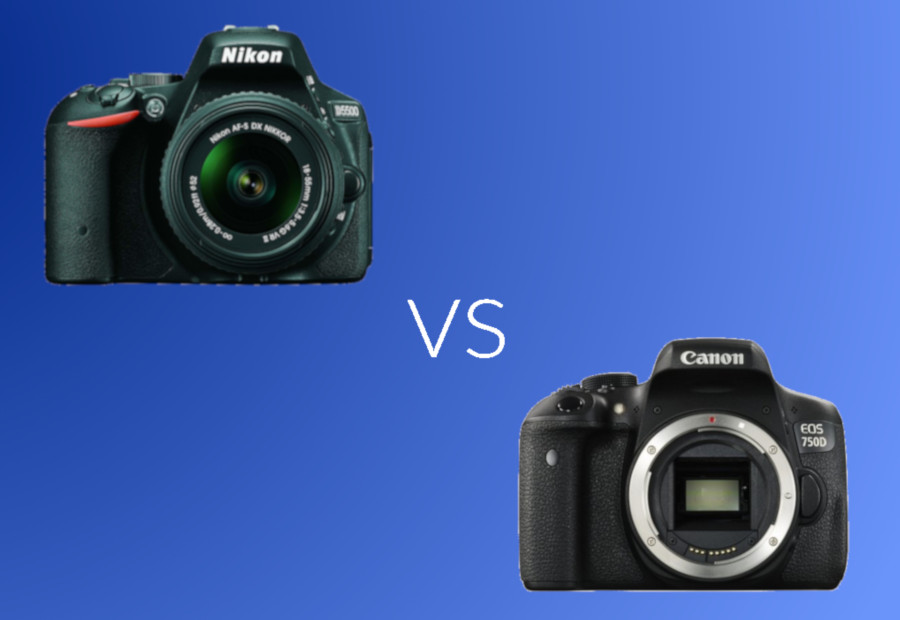 Nikon D5500 and Canon 750D are two entry-level DSLR cameras that were released in the same year of 2015. Although the price of Canon 750D is a bit more expensive than Nikon D5500, these two cameras basically have the similar specs.

D5500 was released by Canon in 2015 as the successor of Nikon D5300 while 750D was released in 2015 by Canon as the successor of 700D. In the Americas, Canon 750D is also known as Rebel T6i. These two cameras have the same sensor resolution of 24.2 MP, but there is a bit difference in terms of size whereby the sensor Nikon D5500 is slightly larger.

Both cameras are equipped with a Wi-Fi feature for wireless photo transfer and a touch screen LCD display. Following are the detail specs of these two DSLR cameras.

Nikon D5500 vs Canon 750D are entry-level DSLR cameras. Meaning that they are not aimed at professionals so that you won’t see advanced specs like long shutter speed range or high ISO range. But still, these two cameras are great enough for handling lots of photography needs, including studio photography. Nikon D5500 is an entry-level DSLR camera that is one step ahead Nikon D3400. Compared to D3400, D5500 offers more autofocus points and better display feature.

As the successor of 700D, 760D comes with several new things. There are an improvement on the image processor, sensor resolution, number of autofocus point and so on.

As you can see on the table above, the overall specs of Nikon D5500 is slightly better than Canon 750D. Nikon D5500 has more autofocus points than Canon 750D. Meaning that D5500 is a better suited option if you have a plan to use your camera to take the pictures of moving objects. A camera with more autofocus points is better for photographing moving objects since it has more detectors to catch the focus point of the object. One thing. These two cameras offer the same frame rates. This means that they will capture the same amount of image per shutter press on the continuous shooting mode.

Speaking of exposure triangle, there is no significant difference between these cameras. Both cameras come with the same shutter speed range although Nikon D5500 offers a slightly higher ISO range. Nikon D5500 has the ISO range of 100 – 25600 compared to 100 – 12800 belong to Canon 750D.

As we have mentioned, these two cameras offer Wi-Fi for wireless photo transfer. In Nikon, you can use SnapBridge app to transfer photos from camera to smartphone/tablet via Wi-Fi while Canon offers Canon Camera Connect for the same purpose.

Regarding the video recording capability, there is no special feature offered by these two cameras. The maximum video resolution these cameras can record is 1920 x 1080 (full HD). The videos recorded using Nikon D5500 are sightly smoother since Nikon D5500 offers the frame rate of 60 fps while Canon 750D offers only 30 fps.

As usual, we have created the image below to ease you in comparing the sensor size of Nikon D5500 and Canon 750D. 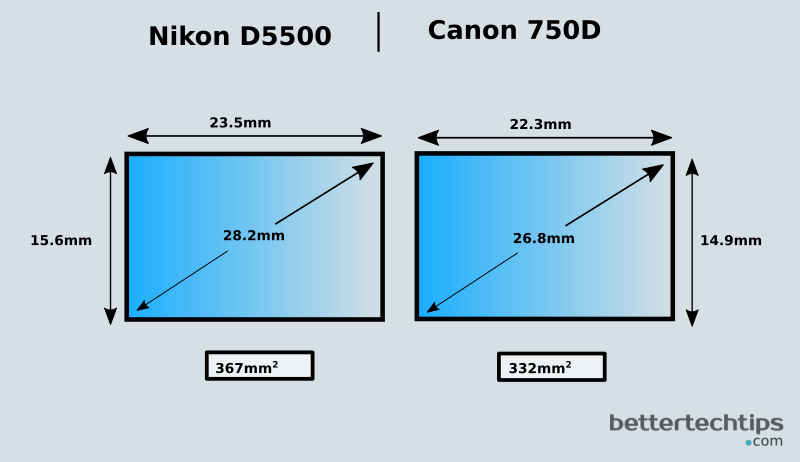 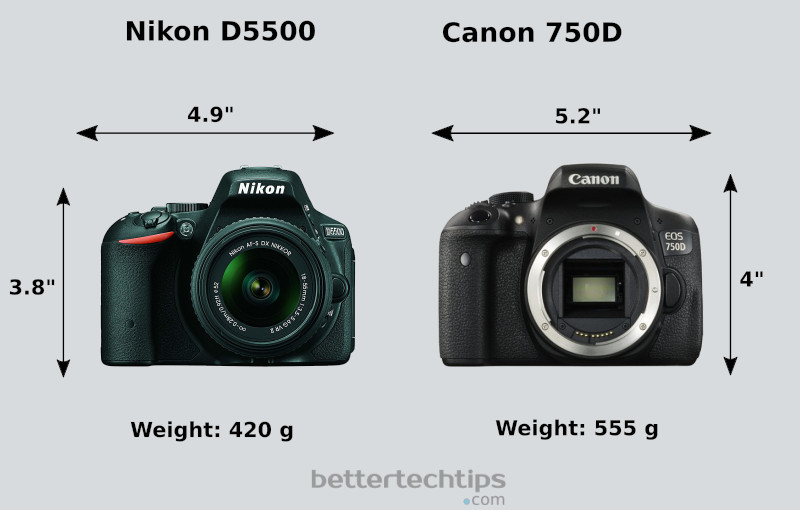 We have selected some examples of the photos taken using both Nikon D5500 and Canon 750D on Pixabay to save you time.

Yo know that there are several factors affecting the end results of the photos taken using certain camera model. From the technical factor, the used lens and the applied settings are two of the most affecting factors. That is why have also added the EXIF data of each photo below so you can check out the used lens type as well as the applied settings.

Both Nikon D5500 and Canon 750D are entry level DSLR cameras so the specs and features offered by these two cameras are not too advanced. Compared to other entry level DSLRs like Nikon D3400 and Canon 1300D, Nikon D5500 and Canon 750D have a better specs. These two cameras, respectively, have the autofocus points of 39 and 19. Meaning than they can be a great gear if you want to learn to be a professional sport photographer in which your job would involve photographing the moving objects.

These two cameras are old models, released in 2015. They have the same sensor resolution (24.2 MP), but Nikon D5500 has a slightly larger size. A larger camera sensor has a better low-light sensitivity as well as richer color-depth. In addition, larger camera also means wider dynamic range. Other advantages of Nikon D5500 over Canon 750D is that Nikon D500 has a longer battery life and a slightly smoother video. Even so, Canon 750D is also a great camera. You can see by yourself at the examples the photos above in which the photos taken using Canon 750D also has a great quality.