HomeCameraNikon D5600 vs Canon 760D: Which DSLR Camera is Better? 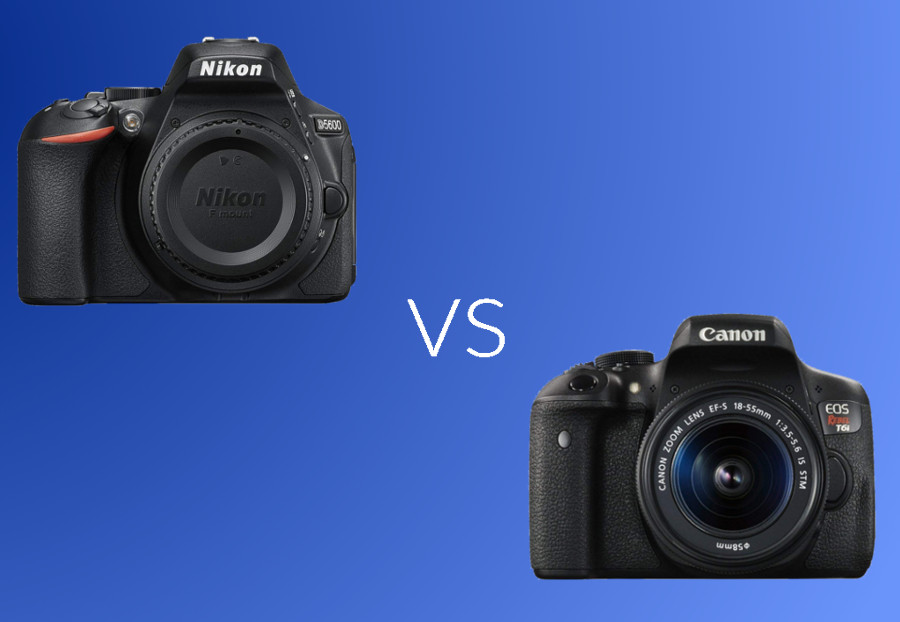 Nikon D5600 and Canon 760D are two entry-level DSLR cameras that are equipped with an APS-C sensor. These two cameras were announced in, respectively, November 2016 and February 2015. The overall specs of these two cameras are not much different.

One question. Which camera you should be buying? Before answering this question, let’s find out a brief background of these two cameras.

Nikon D5600 is the successor of D5500 which was announced by Nikon in January 2015. Not much changes added by Nikon to D5600. The only new feature added to D5600 is Bluetooth. Compared to other entry-level DSLR cameras from Nikon like D3400, Nikon D5600 has slightly more advanced specs, especially if you want to use your camera to learn taking the pictures of sport events.

Canon 760D, meanwhile, is an entry-level DSLR camera released together with 750D. These two cameras (Canon 760D and 750D) have similar specs, but Canon 760D (which also known as Rebel T6s), has a more professional look thanks to its LCD information display on the top of the body. At the time of writing, Canon 760D is the only Rebel series (EOS xxxD) to have a LCD on the top of its body.

As we have mentioned above, Nikon D5600 comes with very few changes compared to its predecessor D5500. The only new feature offered by D5600 is Bluetooth which you can use to transfer your photos to smartphone/tablet via Nikon’s SnapBridge app.

Other advantage of Nikon D5600 over Canon 760D is that it offers both Wi-Fi and Bluetooth so you can connect your camera with smartphone/tablet for a purpose of transferring photo via SnapBridge app or other purpose. Canon 760D actually also offers Wi-Fi, but this feature is not available for all countries.

Another aspect where Nikon D5600 is better than Canon 760D is the video recording capability. These two cameras have the same maximum video resolution (1920 x 1080), but Nikon D5600 has more frame rates than Canon 760D (60 fps compared to 30 fps). In addition, Nikon D5600 comes with a built-in time-lapse movie feature while Canon 760D doesn’t offer the same feature.

We have created the image below to make it easy for you in comparing the size between the sensor of Nikon D5600 and Canon 760D. 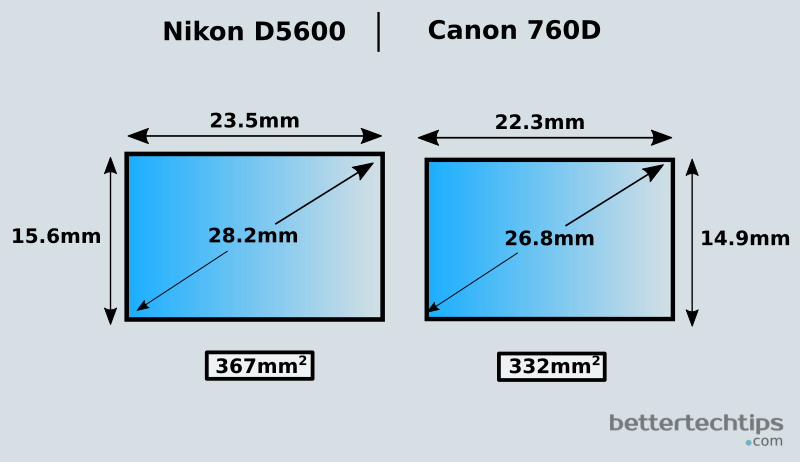 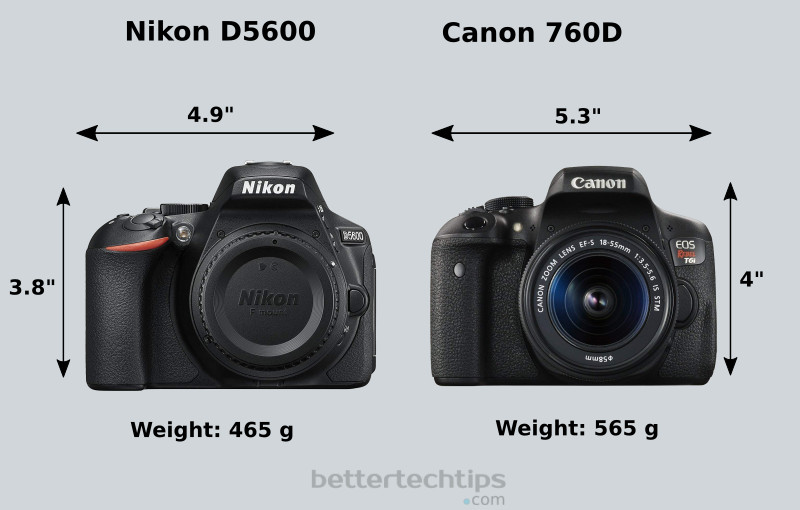 According to the specs offered by these two cameras — the sensor in particular –, Nikon D5600 should be able to generate better photos than Canon 760D. However, there are some factors affecting the image quality generated by a camera. From the technical aspect, two other determinants other than the sensor are the used lens and the applied settings.

You can visit some stock photo websites to find the examples of photos taken using both Nikon D5600 and Canon 760D. If you don’t have enough time to conduct a research, we have done it for you. Take a look at the photos we have taken from Pixabay below. There is also an EXIF data on each photo so you can see the used lens type as well as the applied settings.

Here we are. After you have read our analysis above, you know which camera is better. Overall, Nikon D5600 is slightly better than Canon 760D. There are some aspects where this camera is better than its competitor from Canon. The test results of DxOMark also tell so. That Nikon D5600 is better than Canon 760D (you can see the score on the table above). However, photography covers many aspects. It’s okay if you have your own consideration before making a purchase. Besides, the difference is not too significant. You can take a look at the photo examples above that the photos generated by Canon 760D are good as well.

One more thing. If you plan to use your camera to record some videos, Nikon D5600 is also a more recommended model. These two cameras have the same maximum video resolution, but Nikon D5600 offers more frame rates. Meaning that the videos recorded by Nikon D5600 are slightly smoother. Also, Nikon D5600 has a built-in time-lapse feature which is not available on Canon 760D.