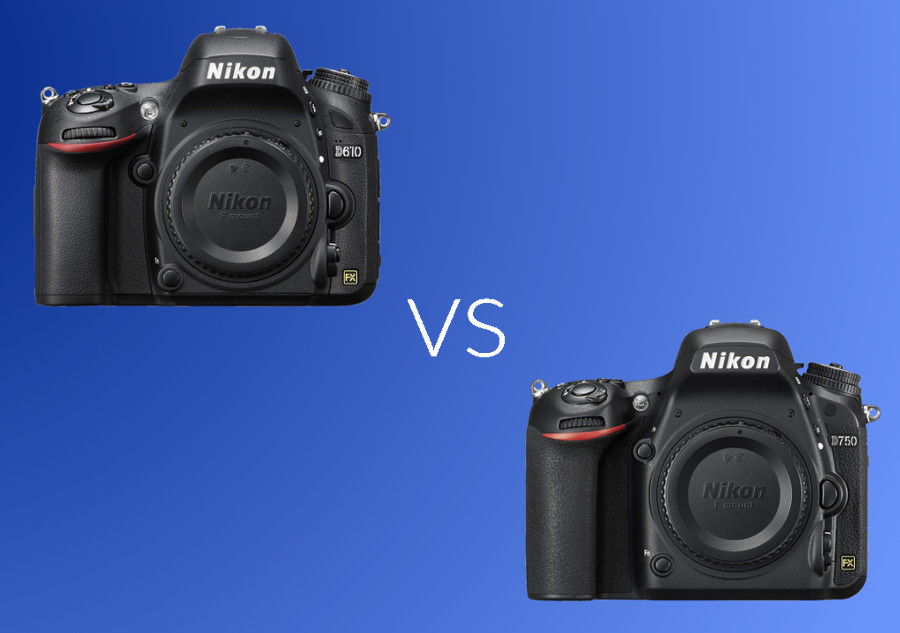 Nikon D750 is arguably the smaller version of Nikon D810. This full frame DSLR camera adopts the technologies from D810, but available in a smaller as well as lighter body. One of the technologies adopted from D810 is the Expeed 4 image processor.

Nikon D610, on the other hand, is the updated version of D600. One of the new things applied to D610 is new shutter unit that supports a quiet mode at 3 frames per second and a normal continuous mode at a slightly improved 6 frames per second. In addition, this camera also comes with an improved white balance.

Since both Nikon D610 and D750 use a full frame sensor, there is relatively no significant difference in terms of sensor size. You will even find no difference at all (explained later below). For now, let’s take a look at the table below to see the differences between the specs of these cameras.

On the market, the price of Nikon D750 is higher than D610. The reason is because on some sections, this camera has a better spec than D610. One of which, Nikon D750 has a longer ISO range. It is also capable of capturing more images on the continuous shot mode, which will be a bit helpful if you use your camera to primarily take the pictures of moving objects.

Let’s start the specs comparison from the ISO range. As just said, Nikon D750 comes with a longer ISO range than its older brother D610. This full frame DSLR camera comes with the ISO range of 50 – 51200 while D610 has the ISO range of 50 – 25600. Since these cameras already have a large sensor, high ISO might is not too crucial. But still, higher ISO range will be useful for some situations. Like when you are photographing an extremely fast object. A high shutter speed setting should be followed by a higher ISO as well to keep your photos not being underexposure. Speaking of shutter speed, both Nikon D610 and D750 come with the same shutter speed range, 1/4000 – 30.0. Nikon D750, however, is better at photographing moving objects. First, this camera has more autofocus points — 51 compared 39 –. Second, D750 has more frame rates as well as higher ISO range.

As you can see from the images above. One of the visible differences between Nikon D610 and D750 is the display. Both cameras have a 3.2-inch LCD display. But, the screen of D750 has a tighter pixel density so it is capable of delivering sharper image. Also, Nikon D750 offers an articulated screen although doesn’t support touch operation while Nikon D610 doesn’t offer the same feature on its screen.

One thing these two cameras have in common: They are not capable of recording a 4K video despite their large sensor. The maximum video resolution these cameras can record is 1920 x 1080. Again, D750 is slightly better than D610 on this section since it has more frame rates, 60 compared to 30 belong to D610.

Battery is another component that is worth considering when you want to buy a new camera. On the normal use, the battery of Nikon D750 can fire up your camera to take about 1230 photos while Nikon D610 is only capable of capturing 900 photos per charging. Both Nikon D610 and D750 feature a Wi-Fi to allow transferring photos from camera to smartphone/tablet via Nikon’s SnapBridge app.

Both Nikon D610 and D750 have a large sensor since they use full frame sensor. The size of the sensor of these cameras is precisely the same. There is no difference at all. Take a look at the image we have created below. 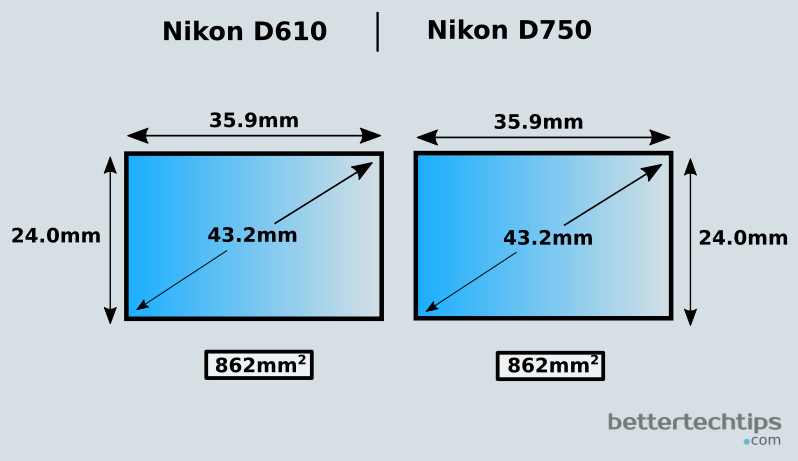 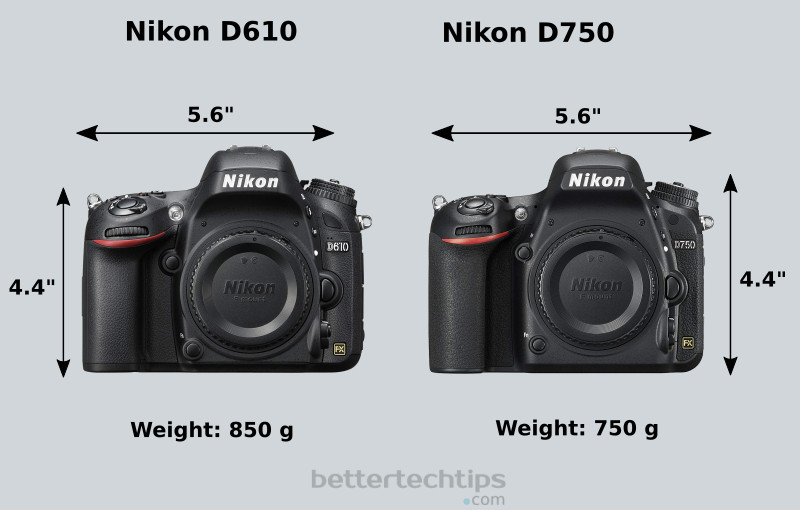 Say you already know the camera model you want to buy, but there is still a doubt on your mind because you haven’t seen any photo taken using the model you chose. We have explored some of the examples of photos taken using both Nikon D610 and D750 on Pixabay.

In case you didn’t know, Pixabay is a free stock photo website. It allows you to find photos based on the camera model. Just keep in mind that in addition to sensor, the lens you use also determine the end results of your photos. That is why we have also added the EXIF data to allow you identifying the lens used on each photo.

Until here, you must have known which camera has the better specs. Nikon D750 is the camera that has a better specs. However, you have to spend more money to take this camera home. Think wisely before you make a purchase and ask yourself if you really need this feature or that one. Just because a camera offers more features and higher specs, it doesn’t mean that you should buy it. As long as it can fulfill your photography needs, why not?

Be it Nikon D610 or D750 is a great DSLR camera with a full frame sensor. If you have enough money, we will suggest you to buy D750. It has a longer ISO range, more autofocus points and more frame rates. The combination of these elements make D750 better at capturing moving objects than D610. But, don’t be discouraged if your budget is limited. Nikon D610 is also a great full frame camera, with a high score on DxOMark.