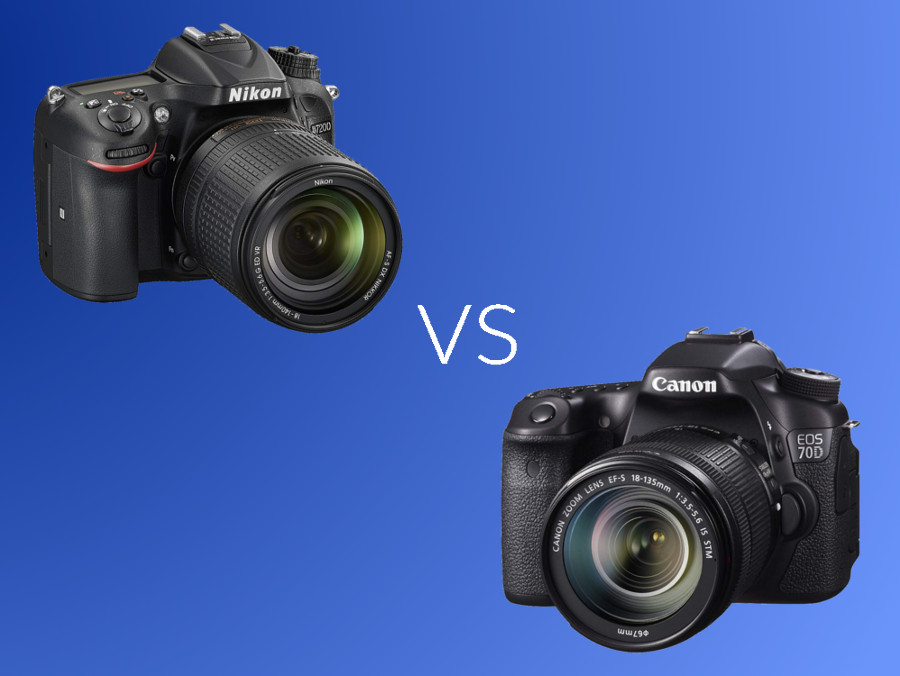 Mid-range DSLR can be a good start before you jump into a full frame professional DSLR. On this segment, D7200 from Nikon and 70D from Canon are the models you can consider. But, worth noting that they are not the latest models. Currently, Nikon D7200 has been superseded by D7500 while Canon 70D was superseded by 80D.

As the mid-range DSLRs, both Nikon D7200 and Canon 70D offer higher specs and more advanced features than entry-level DSLRs to fulfill more photography needs. In some aspects, Nikon D7200 looks better than Canon 70D. For instance, Nikon D7200 has a higher sensor resolution than its competitor from Canon so it possible for you to take pictures with a higher resolution. Nikon also has a larger battery capacity to take more pictures on a single charge.

Even so, we need to make a more detailed analysis before coming up with a decision if Nikon D7200 is really better than Canon 70D. Let’s start from analyzing the specs.

Comparing the specs of two cameras is always relative depending on the purpose of the camera use itself. For instance, if you need a camera to primarily record videos than a camera with the capability of recording 4K videos might is a good option. Unfortunately, be it Nikon D7200 or Canon 70D has no this capability. The maximum video resolution these cameras can record is 1080/60p. They also offer no video stabilization feature.

As mentioned above, Nikon D7200 is better than Canon 70D is some aspects. On DxOMark test, Canon 70D earned only the score of 68. Far lower than Nikon D7200 which earned 87. Nikon D7200 itself is one of the best Nikon DSLR cameras based on DxOMark scores.

With Nikon D7200, you can set the ISO up to 102400 while Canon 70D has the maximum ISO of only 25600. In addition, Nikon D7200 also has more autofocus points, nearly three times more. In theory, a camera with more autofocus points is better to take pictures of moving objects. For this case, Canon has a slightly more fps. Nikon D7200 is also better in terms of battery. On a single charge, you can use this camera to take about 1,110 pictures while Canon 70D is only capable of taking pictures of about 920 pictures.

Sensor should be the first thing you consider when you want to buy a new camera as it is the main component of a camera. Camera with a larger sensor has always been a better choice. In terms of size, there is not much difference between the sensor of Nikon D7200 and Canon 70D. The sensor of Nikon D7200 has the size of 15.6 x 23.5 while Canon 70D is 15 x 22.5. The image below shows the sensor size of those two cameras. 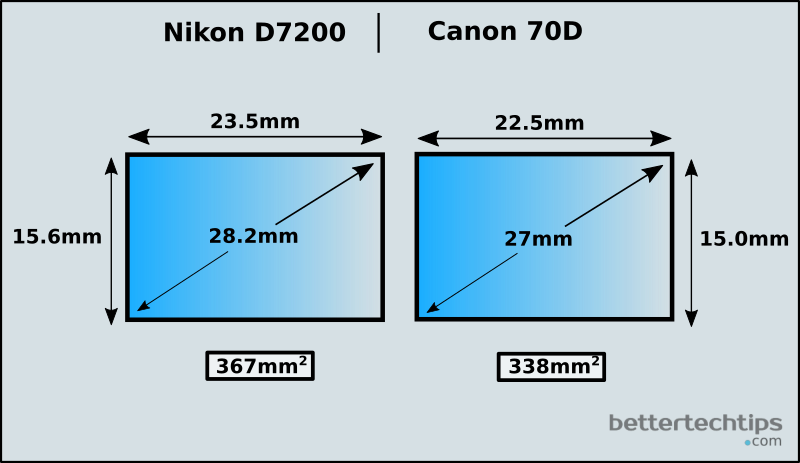 There are some differences regarding the dimension of Nikon D7200 and 70D. On the width side (horizontal), Canon 70D is slightly wider than Nikon D7200. Conversely, Nikon D7200 has a higher number on the high side. The image below shows the body comparison between Nikon D7200 and Canon 70D. 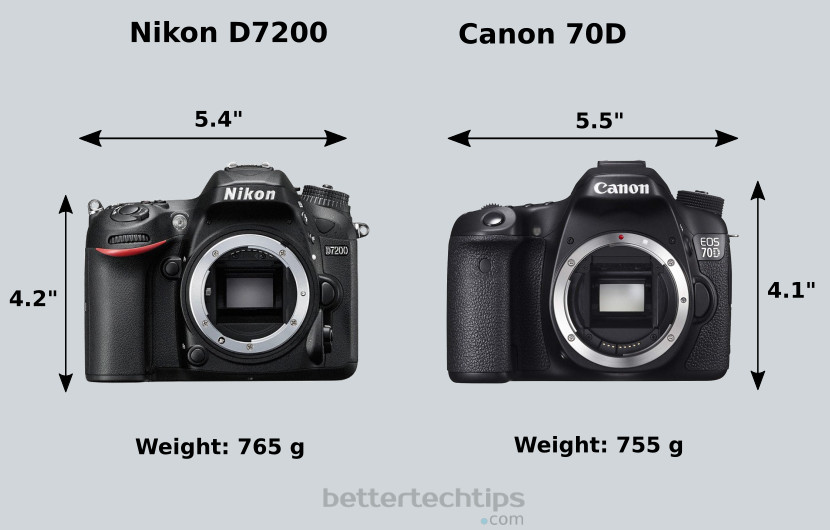 DxOMark regularly tests every new camera released on the market, although not all cameras are tested. During the test conducted by DxOMark, Nikon D7200 earned the higher score than its competitor from Canon (as you can see on the table above). This can be an evidence that not only Nikon D7200 is better on paper but also on the field.

Canon 70D, however, has some features that are not offered by Nikon D7200. It comes with an articulated display that supports touch operation while Nikon D7200 doesn’t offer the same technology. It also has a slightly more fps which is handy if you use your camera on the continuous shot mode for capturing moving objects, despite its fewer autofocus points.