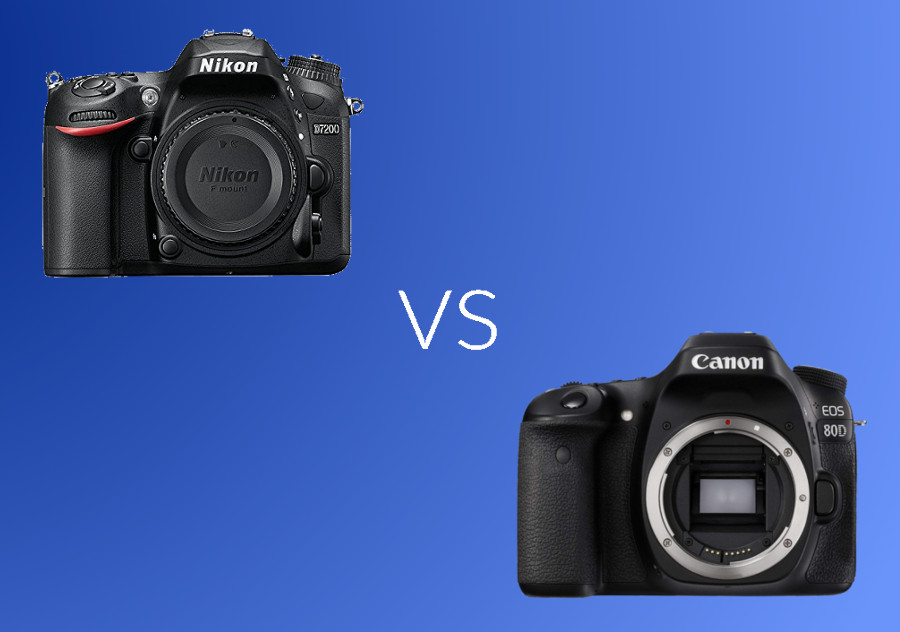 Entry level DSLRs are good to learn basic camera settings and basic photography concepts, but you need to upgrade your gear to level-up. Mid-range DSLRs like Nikon D7200 and Canon 80D, which we will discuss, can be a great choice to level up your photography skill.

But, once you dig deeper, you will find that Nikon D7200 is better in some sections. Let’s start this comparison by taking a look at the table below.

As briefly mentioned above, one of the visible differences between Nikon D7200 and Canon 80D is the screen. On Canon 80D, you can make the settings by tapping the screen since Canon 80D offers a touch screen display which also articulated. On the other hand, D7200 doesn’t support the same technology. The only way to make the settings on Nikon D7200 is by using the available buttons on its body. Even so, the screen of Nikon D7200 is capable of displaying a sharper image since it has more pixels: 1228800 compared 1040000 belong to Canon 80D. Also, Nikon D7200 has a slightly larger screen size, 3.2-inch compared to 3-inch.

What about other specs?

If you want to take the photos of moving objects, you need a camera with more autofocus points as well as more frame rates which is capable of capturing more image on a single shutter press on the continuous shot mode. For this sort of need, it’s tricky enough which once to pick. One the one hand, Nikon D7200 offers more autofocus points. One the other hand, Canon 80D has more frame rates than Nikon D7200. Meaning that Canon 80D is capable of capturing more images on a single shutter press. Be it Nikon D7200 or Canon 80D has the same shutter speed range of 1/8000 – 30.0.

The similarity between Nikon D7200 and Canon 80D also cover the sensor. Well, the sensor of Nikon D7200 is slightly larger, but the difference is not too significant.

Although the sensor of Canon 80D is slightly smaller than Nikon D7200, it has more photo detectors (higher resolution). So, if you need a camera which capable of generating higher maximum image resolution, you should choose Canon 80D. The sensor of Nikon D7200 has the crop factor of 1.5 while Canon has the crop factor of 1.6. Both of them have the same aspect ratio of 3:2. We have created the image below to makes it easier for you to compare the sensor size between those two DSLR cameras. 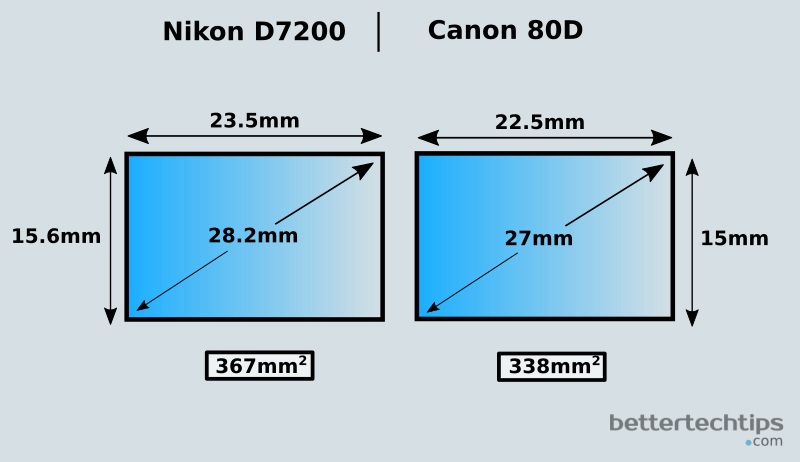 There is no relation between a camera body and the quality of the photos it can generate. But in case you want to compare the body of Nikon D7200 and Canon 80D, we have also created the images below. 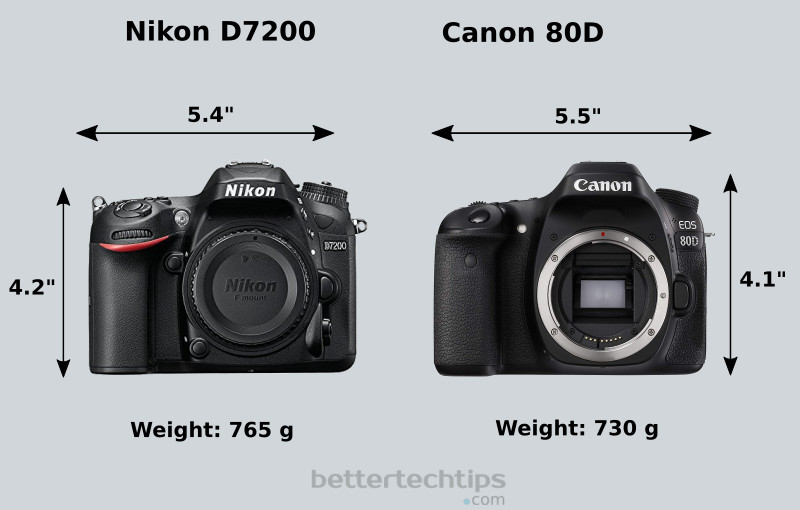 As you can see on the images above, there is no significant difference between the body dimension of Nikon D7200 and Canon 80D. Nikon D7200, however, is a bit heavier than Canon 80D.

Say you have made a decision which camera you want to buy. But before making a purchase, you want to convince yourself once again by taking a look at the examples of photos taken using the camera you choose, whether Nikon D7200 or Canon 80D.

There are a bunch of online resources you can refer to for finding the examples of photos taken using certain camera. We always recommend Pixabay since this website has an abundant photo collections. In case you don’t have enough spare time to conduct a research, we have done it for you. Just take a look at the images below. We also added the EXIF data in order to allow you to identify the lens used on each photo.

Finally, we have come into this section. Conclusion has always been the hardest part when you are comparing two items. In general, there is no significant difference between Nikon D7200 and Canon 80D. At least if you use what’s on the paper as the parameter. The specs and features of these two mid-range DSLRs are not much difference.

Nikon D7200, however, has a slightly larger sensor than Canon 80D, but the difference is not too significant. Despite its smaller size, the sensor of Canon 80D has more photo detectors. As a result, Canon 80D is capable of generating photos with higher maximum image resolution. There are some section where Nikon D7200 is better than Canon 80D. Conversely, there are also some areas where Canon 80D is better than D7200. To help you in making a decision, you might can take advantage of the DxOMark score. According to the test results of DxOMark (you can see the score on the specs table above), Nikon D7200 is better than Canon 80D. But keep in mind that the aspect DxOMark tests is only the sensor performance.