Nikon D750 vs Sony A7 II: Which Full Frame Camera is The Better?

HomeCameraNikon D750 vs Sony A7 II: Which Full Frame Camera is The...

Nikon D750 vs Sony A7 II: Which Full Frame Camera is The Better? 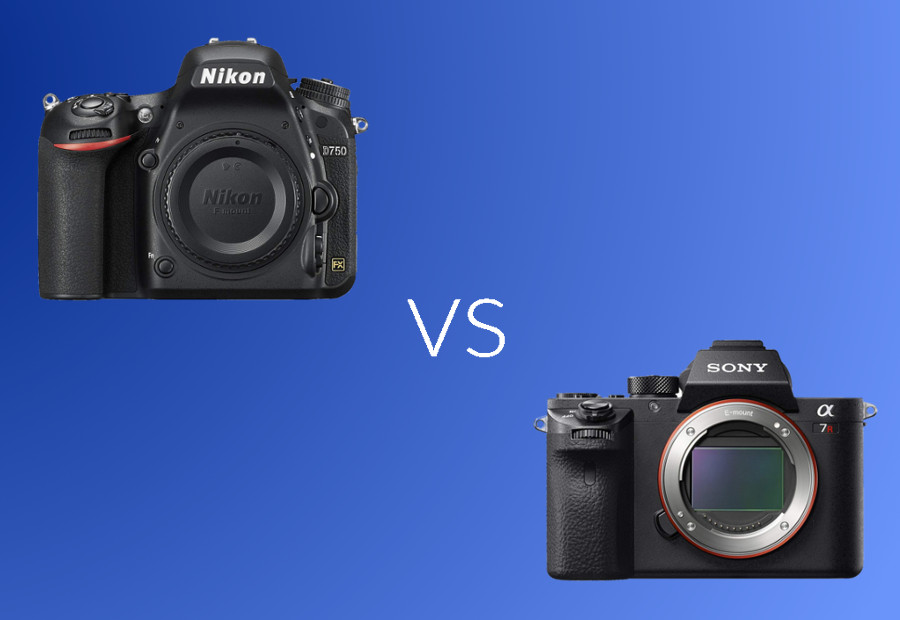 Nikon D750 and Sony A7 II are affordable full frame cameras from two of the most well-known camera manufacturers: Nikon and Sony. Despite its compact body, Sony A7 II offers a large sensor. On some sections, this camera even offers better specs than Nikon D750. But, we need to take a deeper analysis before coming up with a conclusion which one is the better between these cameras.

Both Nikon D750 and Sony A7 II entered the market in the same year of 2014. Nikon D750 is arguably “the smaller version of D810” since it adopts the technology from Nikon D810, but comes with a smaller body. At the time of writing, Nikon hasn’t released the successor of D750.

Different story applies to Sony A7 II. This camera already has a successor, SonyA7 III, which was announced by Sony in February 2018. To ease your job in comparing the specs between Nikon D750 and Sony A7 II, we have created the table below.

Be it Nikon D750 or Sony A7 II is a less suited option if you plan to mainly use your camera to record videos. They have no capability of recording 4K videos. The maximum video resolution these cameras are able to record is 1920 x 1080 with the frame rates of 60.

If you are comparing a DSLR camera and a mirrorless camera, there is always a significant enough different on the battery section. Typically, a DLSR camera has a longer battery life than a mirrorless camera. This also applies to Nikon D750 and Sony A7 II. The gap is far enough. While you can use Nikon D750 to take about 1200 photos per charging, Sony A7 II will only last for about 350 shots.

One of the advantages of a mirrorless camera compared to DSLR is that a mirrorless camera typically has more autofocus points, which will make your job in taking photos of moving objects be much easier. Again, this also applies to both Nikon D750 and Sony A7 II. Nikon D750 has only 51 autofocus points compared to 117 belong to Sony A7 II. In addition, Sony A7 II also has a longer shutter speed range: 1/8000-30.0. While Nikon D750 has only 1/4000-30.0 shutter speed range. They offer the same ISO range of 50 – 51200. Another things that Nikon D750 and Sony A7 II have in common are Wi-Fi for wireless photo transfer, histogram, sound recording an so on as you can see on the table above.

As mentioned above, despite its smaller body, Sony A7 II offers a large sensor. It adopts a full frame sensor with the crop factor of 1.0, same as Nikon D750. The sensor of Sony A7 II has the size of 23.9 x 35.8 mm. It is slightly smaller (about a percent) than Nikon D750 which has the size of 24 x 35.9 mm. Take a look at the image we created below to compare the sensor of these cameras. 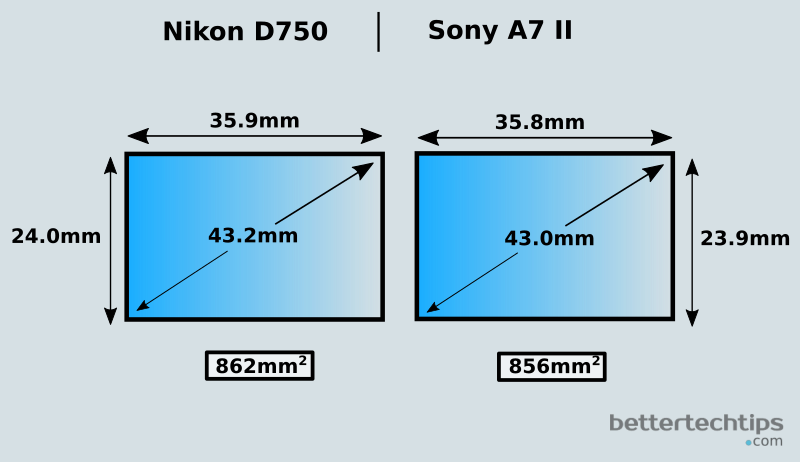 Everyone knows that body size is the most visible aspect that differs a DSLR camera and a mirrorless cameraa. But, how far the difference between Nikon D750 and Sony A7 II is?

As usual, we have created the images below to makes it easy for you to see the differences between the dimension of nikon D750 and Sony A7 II. 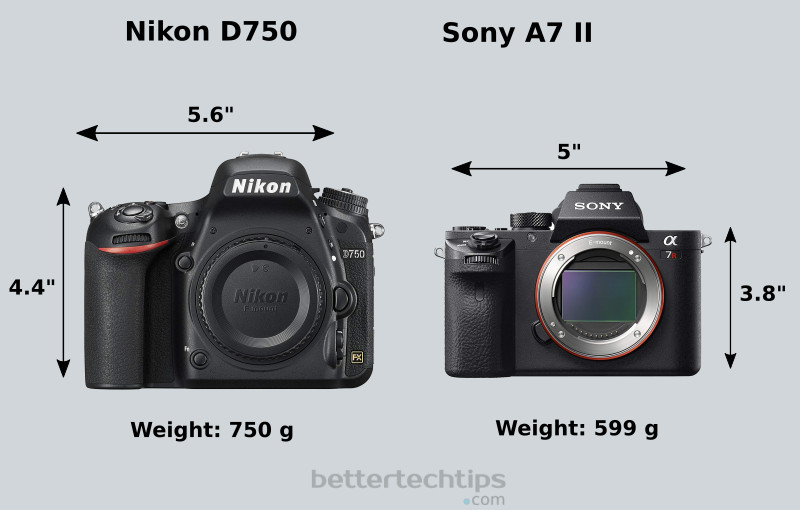 All camera manufacturers develop cameras with a major purpose: to help you generate good photos. So, no matter the specs a camera has, if it is unable to generate good photos then there is no reason to buy it. With their large sensor, be it Nikon D750 and Sony A7 II is capable of generating good photos, as shown on the examples below. All photos below were taken from Pixabay.

Just keep in mind that in addition to sensor, lens also plays a role in determining the quality of the photos you took. It’s hard to figure out the lens model used on a photo, but you can at least guess the lens type by reading the EXIF data. That is why we also added the EXIF data of each photo below.

DSLR and mirrorless camera are actually different systems so comparing a certain model and a mirrorless model has never been a good idea. These two camera systems have their own characteristics. DSLRs is superior when it comes to battery life, while mirrorless cameras typically have more autofocus points which is great for taking photos of moving objects.

Overall, both Nikon D750 and Sony A7 II are great cameras, with a large sensor. From the point of view technical aspect of photography, Sony A7 II might is a bit better than Nikon D750. First, it has a longer shutter speed range. Second, it also has more autofocus points. These two aspects are crucial enough if you often use your camera to take the pictures of moving objects. One clear thing, both Nikon D750 and Sony A7 II are less suited if you are looking for a camera for video recording.