Better Tech Tips
Home Camera Sony A6000 vs Fujifilm X-T10: Which Mirrorless Camera Is The Better? 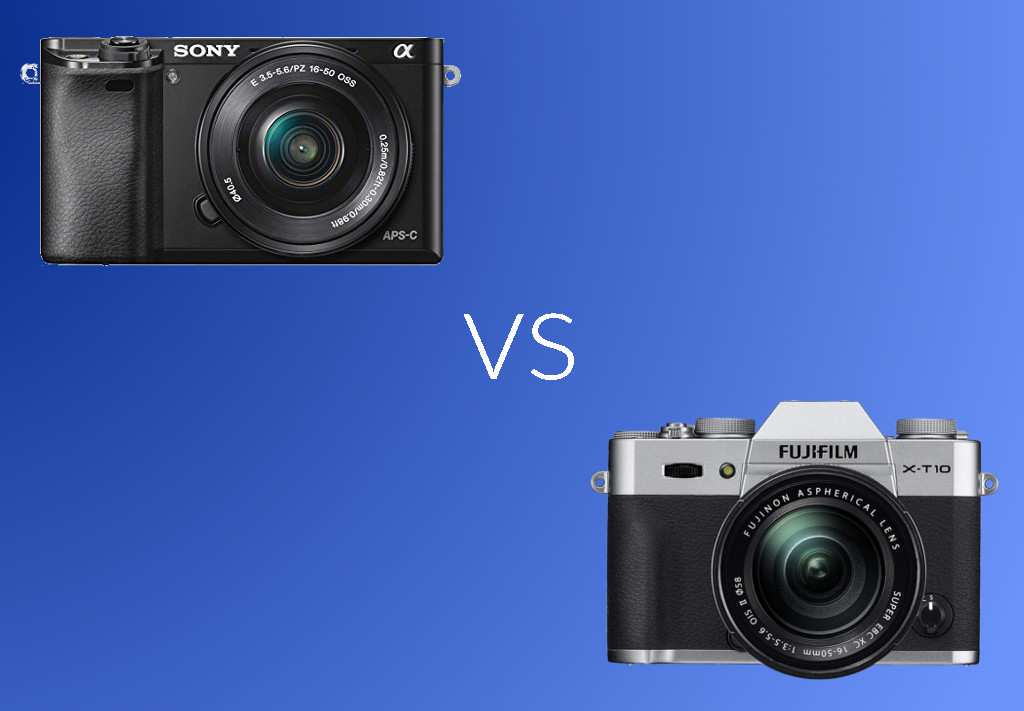 Sony A6000 and Fujifilm X-T10 are mirrorless cameras that were announced by their respective manufacturers on February 2014 and May 2015. These cameras have intermediate specs. Not too high, but capable enough for handling lots of photography needs.

Back to question. Which is the better between these mirrorless cameras? Before answering this question, let’s take a look at the table below to compare the specs of Sony A6000 and Fujifilm X-T10.

You see from the table above that one of the significant differences between Sony A6000 and Fujifilm X-T10 is the sensor resolution. In digital camera, what matter about sensor is actually not the resolution. Resolution only affects the image resolution instead of quality. What matter about digital camera sensor is the size and the sensor size Sony A6000 and Fujifilm X-T10 is not much different. We will cover more details about the sensor aspect later on the next section. For now, let’s analyze other specs. Starting from ISO.

For a photoshoot on a long exposure mode, higher ISO range might will be helpful since you have more options to find the best combination for a proper exposure triangle. On this case, Fujifilm X-T10 is better than Sony A6000.

The maximum video resolution can be recorded by Sony A6000 and Fujifilm X-T10 is 1920 x 1080 with the frame rates of 60 fps. No special features offered by either Sony A600 or Fujifilm X-T10 regarding the video recording.

What about the sensor size?

Take a look at the image below to see the comparison between the sensor size of Sony A6000 and Fujifilm X-T10. 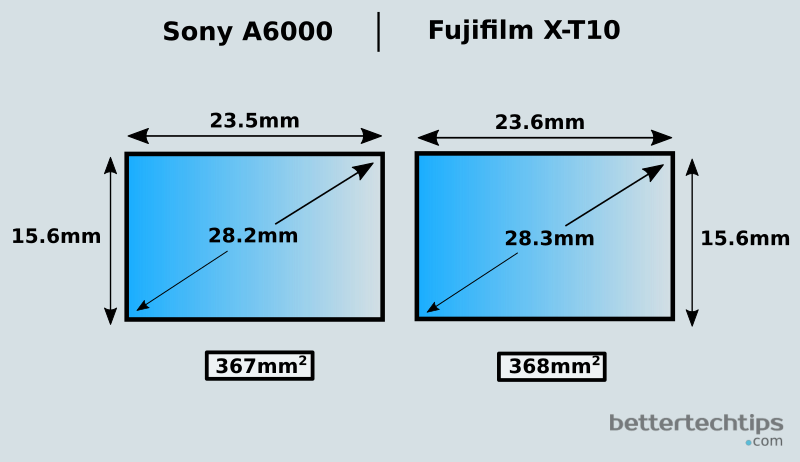 If you have been a while on photography, you must know the tendency of Fujifilm when developing a mirrorless camera. Nearly all of the mirrorless camera models developed by this manufacturer have a retro design with the style of DSLR. Fujifilm X-T10 is not the exception. The matter of body size, Fujifilm is larger than A6000. It also has a heavier weight than Sony A6000. 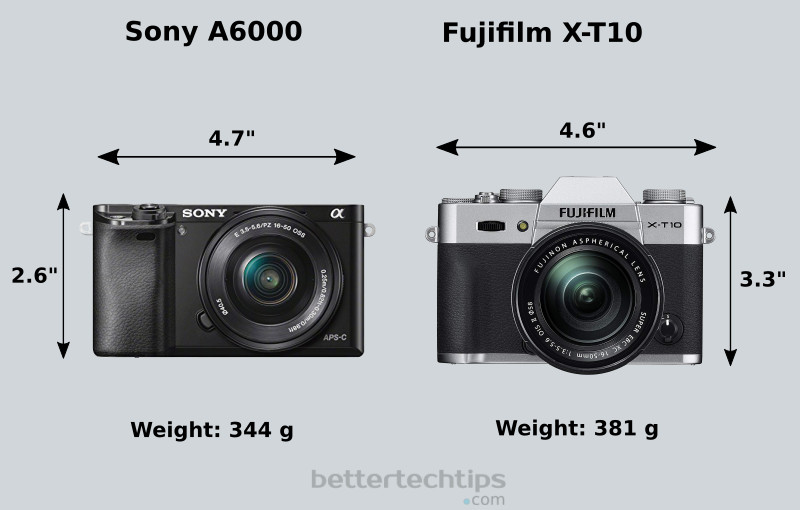 Finally, we have come to this section. Taking a look at the photos taken using a camera model you want to buy is one of the ways to get you be more convinced before making a purchase. If you have no idea where to go to see the examples of the photos taken using Sony A6000 and Fujifilm X-T10, don’t worry. We have selected the examples below in which were taken from Pixabay.

Both Sony A6000 and Fujifilm X-T10 are mirrorless cameras with intermediate specs. For professional photographers, these two cameras can be a good complement to the gear they already have. They can also be a great gear for those who want to enter to the photography world. Be it Sony A6000 or Fujifilm X-T10 is a good camera for fulfilling daily photography needs like social media post. They can also be a nice tool for a professional use. Just tailor the lens according to your photography purpose.

Previous articleSony A7 vs Canon 6D: Specs and Features Comparison
Next articleNikon D5 vs Nikon D810: Which Full Frame DSLR Camera You Should Buy?

Canon Rebel SL2 is the alias name to 200D, an entry-level DSLR camera from Canon. Compared to other entry-level DLSR cameras from Canon like...
Read more
Camera

Sony A7 and Canon 6D are affordable full frame cameras. Even so, they are basically different systems. The major reason why people compare these...
Read more
Camera

Only 8 months after announcing A6300 in February 2016, Sony announced the A6500. Sony added some new features that were previously absent from the...
Read more
Camera

Fujifilm is one of the camera manufacturers that has plenty of mirrorless camera models. One of which is Fujifilm X-T20. On the market, this...
Read more
Camera