HomeCameraSony A7 vs Canon 6D: Specs and Features Comparison 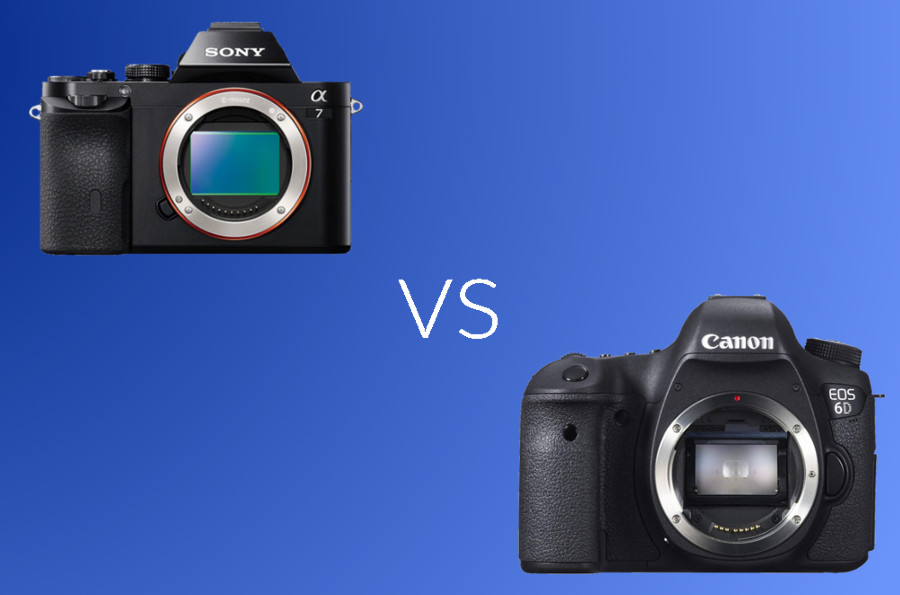 Sony A7 and Canon 6D are affordable full frame cameras. Even so, they are basically different systems. The major reason why people compare these cameras before making a purchase probably is because they have a not too different price. Both cameras are available with price of around $1,000.

Sony A7 is a mirrorless camera while Canon 6D is a DSLR camera. Despite its smaller body, Sony A7 has a large sensor. As mentioned on the opening of article above, Sony A7 and Canon 6D are full frame cameras. Meaning that they have a large sensor size.

Speaking of Canon 6D, it is the smallest and lightest full frame DSLR camera from Canon. It also became the first Canon DSLR to feature GPS functions. We have created the table below to ease you in comparing the specs and features of these affordable full frame cameras.

The major highlight of A7 and Canon 6D is certainly their large sensor. But, there are also other aspects you need to notice. Sensor is only a small piece of a digital camera system. Other specs like ISO range, maximum-mininum shutter speed and autofocus point are also worth noticing.

Particularly if you plan to you use your camera to take the pictures of moving objects, the number of autofocus point is the aspect you should consider most. It seems that Canon 6D is not designed to handle this sort of photography need since it comes with fewer autofocus points, only 11. On the other hand, Sony A7 offers 117 autofocus points. In addition, Sony A7 also comes with more frame rates than Canon 6D (see the table). It means that Sony A7 is capable of capturing more images per shutter press on the continuous shot mode than Canon 6D.

There is a fundamental physical difference between these two cameras. We are not talking about the body size since you already know which camera has a larger body size. What we are talking about is the screen model. Sony A7 offers an articulated screen although doesn’t support touch operation. At least, this feature will be helpful if you need to take a picture from an extremely low angle. Canon 6D doesn’t support the same feature. The screen of Sony A7 and Canon 6D has the same size, 3-inch. But, the screen of Sony A7 is a bit better for previewing the photos you took since it has a tighter pixel density. The screen of Sony A7 contains 1,230,000 dots while the screen of Canon contains fewer dots of 1,040,000.

One thing these two cameras have in common. They have no capability to record 4K videos. The maximum video resolution these two cameras can record is 1920×1080, but Sony offers more frame rates than Canon 6D. At the resolution of 1920×1080, Sony has the frame rates of 60 fps while Canon 6D has only 30 fps. When comparing a mirrorless camera and a DSLR camera, you will find a significant difference on the battery section. Due to more electronic components need to be fired up, the battery of mirrorless cameras is run out faster.

Speaking of electronic component, Sony A7 comes with an electronic viewfinder with the magnification of 0.71. 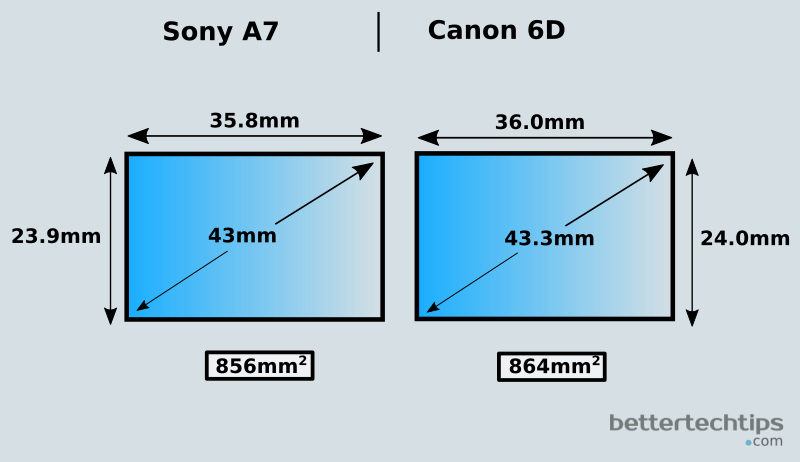 You know which camera has the larger body. But, how much is the difference?

Sony A7 is a mirrorless camera with a DSLR-shaped design. It has a comfortable handle on the right side of its body as well as a viewfinder on the center area of its body. The body of Canon 6D is about 35 percent larger than Sony A7. As usual, we have created the image below so you can compare the body size, as well as the weight, of these two cameras way more easily. 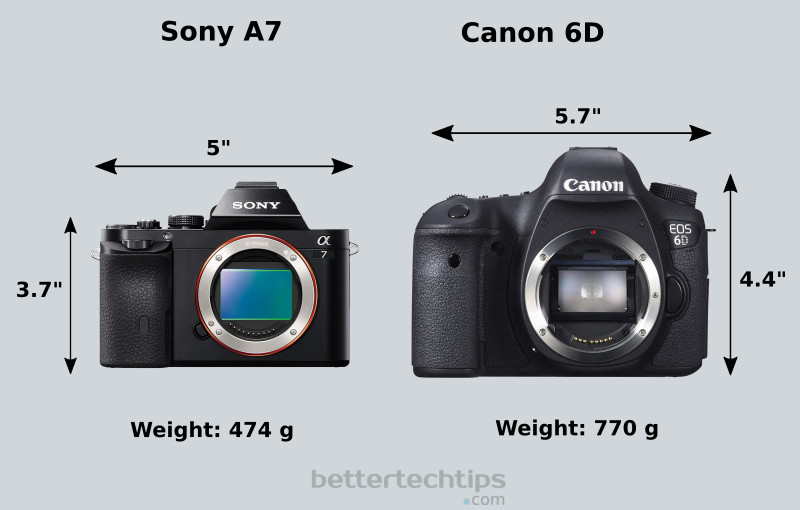 The image quality generated by a camera is determined by some aspects. Two of them are the sensor and the lens. You already know the sensor size of these two cameras since we have covered it above. Now, it’s time to take a look at how good the image quality generated by Sony A7 and Canon 6D. As usual, we have taken some of the best examples of the photos taken using Sony A7 and Canon 6D from Pixabay. You can identify the lens type used on each photo by reading the EXIF data we have included as well.

Sony A7 and Canon 6D are different systems so you will see many differences here and there. Especially on the physical aspect. You can visit this page to see the major differences between mirrorless cameras and DSLR cameras.

From the technical aspect of photography, the specs offered by Sony A7 look better than Canon 6D’s despite its smaller body. With the exception of sensor size and shutter speed range, Sony offers better specs on some sections, including ISO, autofocus points, frame rates and so on. In addition, Sony A7 also has a higher score on DxOMark as you can see on the table above.

Sony A7 is a better suited camera if have you a tendency of using devices with compact design regardless its shorter battery life. Before making a purchase, make sure you really understand your photography needs. Just because mirrorless cameras are being trend, doesn’t mean you have to follow the trend. Each system — mirrorless and DSLR — has their pros and cons.