How to Remove Pocket from Firefox 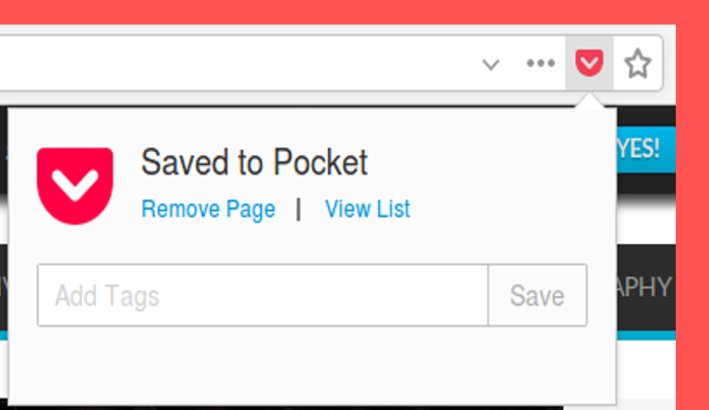 You might be wondering why did Firefox should integrate itself with Pocket? Is there a business relation between them?

The main emphasis of Pocket is basically a read-it-later app for mobile devices. It allows smartphone users to save interesting contents they potentially found, articles in particular, and read them later. However, there are also plenty of internet users who use Pocket as an online bookmark manager since the service is also available on web. With the integration between Firefox and Pocket, Firefox users can effortlessly save the interesting contents they found on the internet to view them later, whether via web or mobile app.

Pocket is absolutely a great app and Mozilla’s decision to integrate Firefox and Pocket is brilliant. It’s just, surely not all users will love this idea. You can always disable Pocket on Firefox anytime.

However, this method doesn’t really disable Pocket on Firefox. The method above not applies only for Pocket but also bookmark icon. To completely disable Pocket features on Firefox you need to edit a certain value on the Configuration Editor of Firefox (about:config page).

Be careful when changing any value on this page since it can cause your Firefox not running as the way it is. You will get warned before accessing this page.

On the about:config page, search for “Pocket” on the available search box. Look for “extensions.pocket.enabled” and double-click on it to change the default value from “true” to “false”.

If you have your mind changed in the future you can re-enable Pocket by returning to this page and restore the default value of “extensions.pocket.enabled” (to true).