How to Migrate from Evernote to OneNote

HomeHow ToHow to Migrate from Evernote to OneNote

How to Migrate from Evernote to OneNote 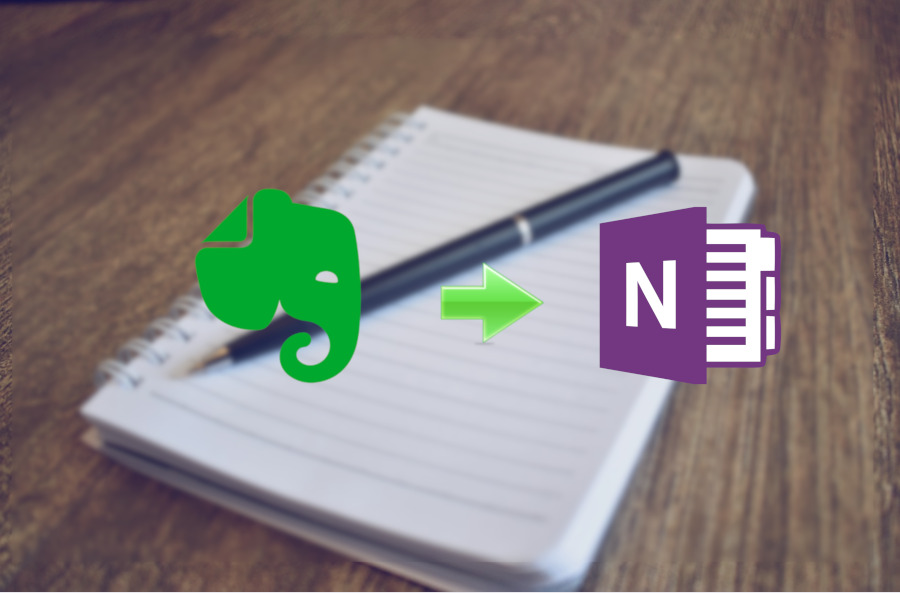 Evernote is a great note-taking app. Well, not great enough if you use the free version of Evernote. Since its initial release, Evernote has undergone a number of changes. One of the of those changes is regarding the access limitation for free users. Previously, free users can sync their Evernote data (notes, to-do lists, images, voices and so on) to as many devices as they want, but today, you can only sync your Evernote data to two devices if you stick to your free account. It is one of the reasons causing free Evernote users to look for another alternative.

OneNote is one of the Evernote alternatives if you think that the new Evernote policy sucks.

Unlike Evernote, OneNote doesn’t restrict you to sync your data with all of the devices you have. You can install OneNote on every device you have and get your data synced. In addition, you can also upload as many files as you want in OneNote. With the free version of Evernote, you are restricted to 60MB per month.

Start migrating from Evernote to OneNote

Microsoft, the company behind OneNote, provides a handy tool that you can use to migrate from Evernote to OneNote. Evernote itself (desktop version) actually also offers an export feature which you can use to export the data you have on Evernote to be imported to other similar tools. But with the importer tool from Microsoft, your job in migrating your Evernote data to OneNote will be much easier.

You can download the binary file (EXE) of the importer from this page. Once you have downloaded the binary file, double click it. Agree to the license agreements and click the Get started button. 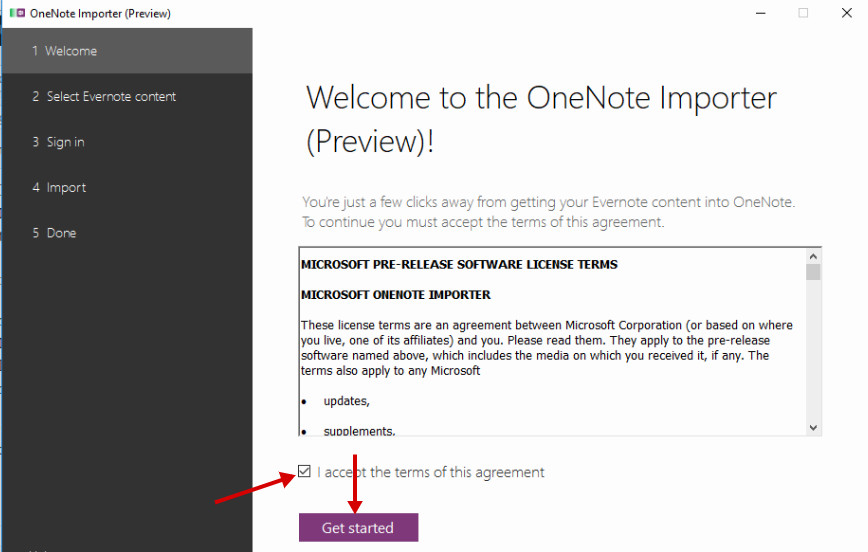 On the next wizard, select the Evernote notebooks you want to transfer and click the Next button. If you want, you can also download the Evernote files. 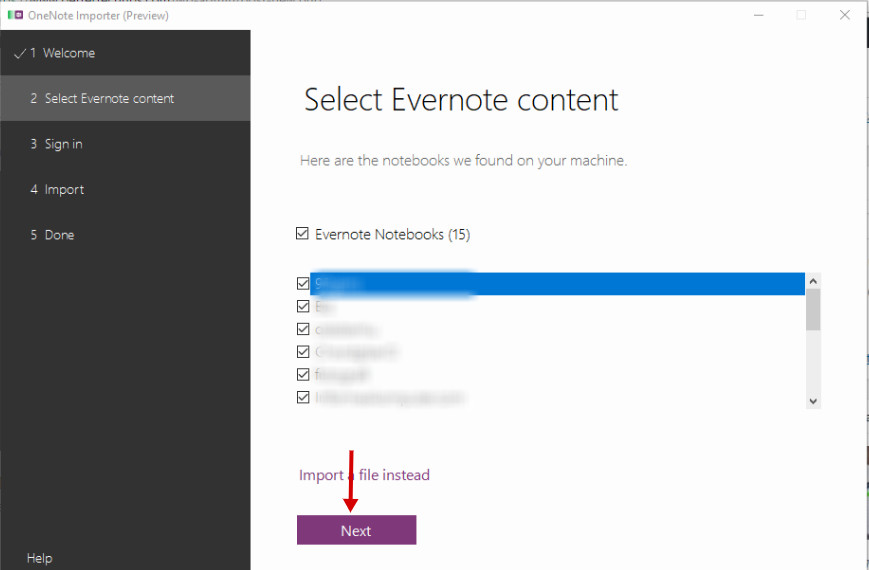 You will be asked to login with your Microsoft account. Login with the one you use for NoteOne.

One the next wizard, the importer will tell you how it will organize your Evernote contents. It will create a new OneNote notebook for each Evernote notebook you have. There is also an option to transfer the Evernote tags you have. Click the Import button to start transferring contents from Evernote to OneNote. 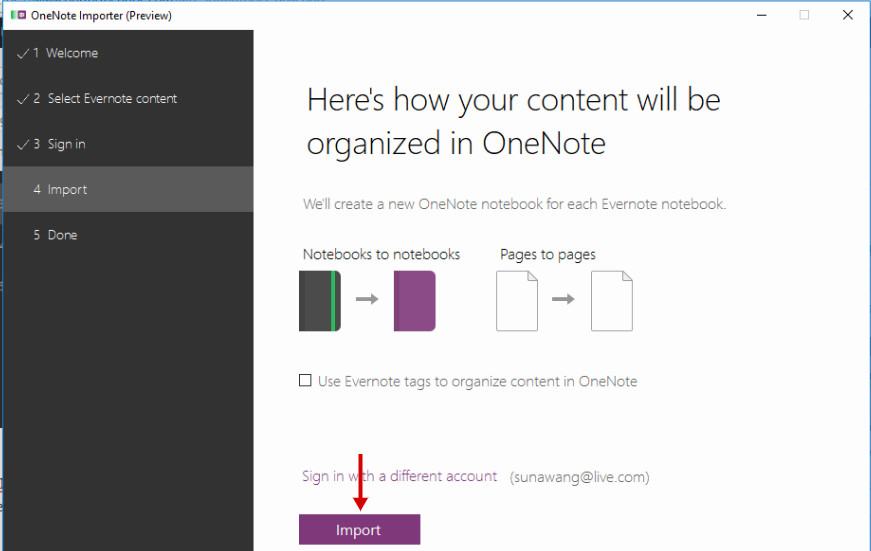 Wait until the OneNote importer is done transferring your Evernote content to OneNote. This can take minutes depending on how many notes you have on Evernote. Once the transferring process is done, click the View notes in OneNote button to see the changes in OneNote. 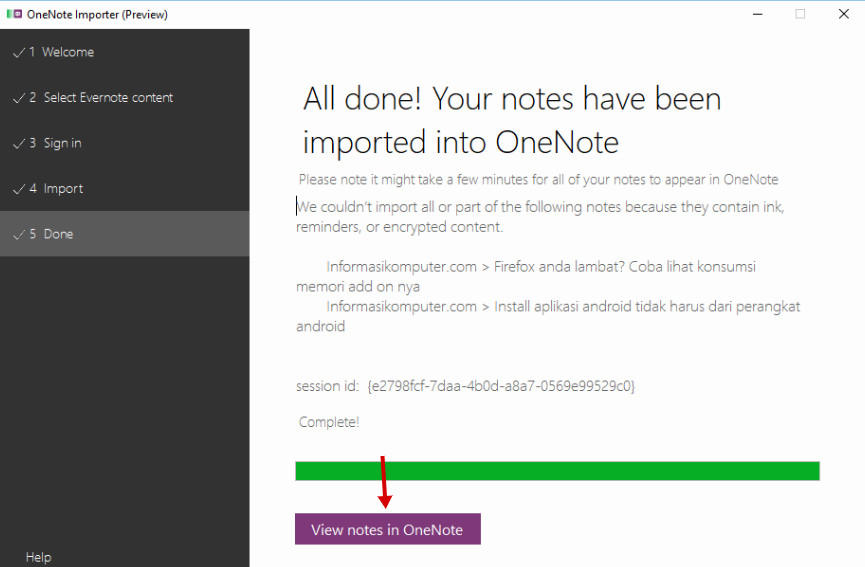 Wait a moment for the syncing process. You will then be welcomed with a message as follows, indicating that you have successfully imported your Evernote contents to OneNote. 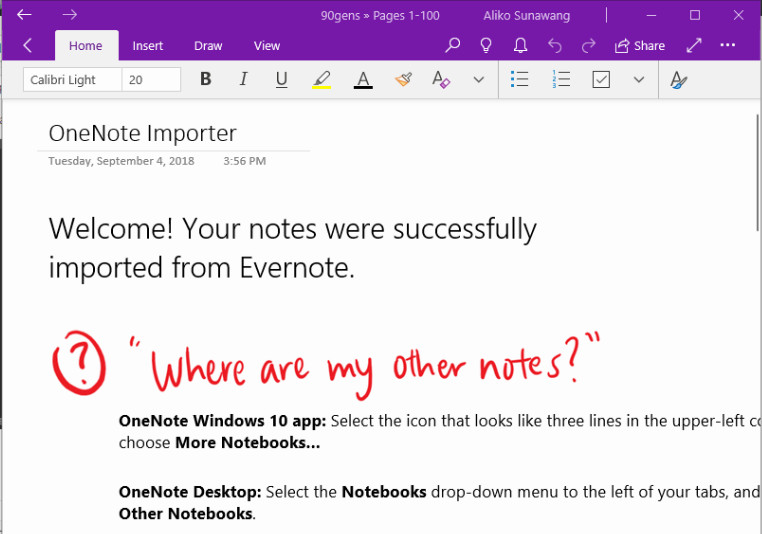 Please note it might take a few minutes for all of your notes to appear on OneNote.

How to Migrate from Evernote to Zoho Notebook