How to Open a CDR File without CorelDRAW (Using Free Tools) 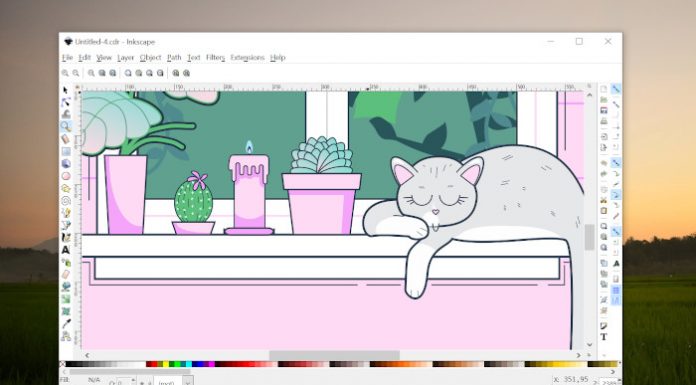 CDR is a default file format of CorelDRAW so in theory, you need CorelDRAW to open it. There are some vector graphics software that has a compatibility with CorelDRAW to allow you to open a CDR file without CorelDRAW. One of which is Inkscape.

Inkscape is an open source vector graphics software that is available for all major desktop operating systems: Windows, Linux, and macOS. It has a default file format of SVG but also recognizes vector formats created by proprietary graphics software such as CDR and AI (Adobe Illustrator). You can download Inkscape on its official website. If you use Ubuntu, you can also install Inkscape via Ubuntu Software Center and if you use Windows 10, Inkscape is also available in Microsoft Store.

To open a CDR file with Inkscape, simply launch the Inkscape app once it is installed on your computer. Go to File -> Open (Ctrl+O) and select the CDR file you want to open and click the Open button.

Inkscape will convert your CDR file into an editable format on its app so you can edit your CDR file. Here is the example of a CDR file opened with Inkscape.

For the first operation, you can try to select a certain part of the image using a path tool or ungroup a certain region of the image.

In addition to Inkscape, another tool that you can use to open and edit a CDR file without CorelDRAW is LibreOffice Draw. It is also free and available for Windows, Linux, and macOS.

User experience design is a huge decider in the success and revenue of a company. It's been proven that UX Design has an ROI...
Read more
Design

3 Reasons Why You Need the Best Mock Up

To have a perfect product for the target customers is definitely the best way to please them. However, it is quite challenging to have...
Read more
Design

Here’s How User Flow Can Improve Your UX Design!

Do you know user flow can drastically help you improve your UX design? Find out about user flow charts and learn how to create them like a pro right here.
Read more
Professional

Why UX/UI Designers Should Use Mood Boards in Their Work

A mood board is a presentation made of photographs, illustrations, patterns, slogans, fonts, and color schemes. It is created for a future design project....
Read more
Business

Why Does Your Firm Need to Design an Impressive Logo for Its Success?

A startup needs to do hundreds of things, from registering its company to creating different marketing strategies to attract its target market. All this...
Read more
Business

How Does Graphic Designing Help in Improving Your Brand Appearance?

Can you name a thing that is made with both science and art? No? That's okay! You learn something new every day. Right? Keeping...
Read more