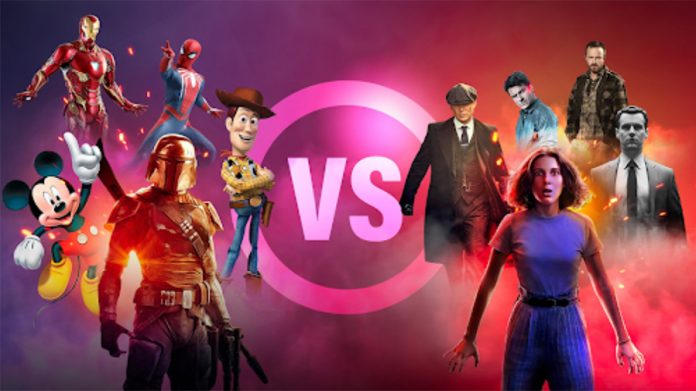 Courtesy of the high-speed Internet connectivity, we live in a digital era. Now we can stream our favorite movies and shows anytime, anywhere on smartphones, computers, laptops, tablets, smart TVs, and other devices.

However, Netflix offers state-of-the-art features to outshine Disney+, such as pricing, comprehensive catalog, and compatibility. Keep reading to find out more detail about these exciting features Netflix offers.

Read along to learn about the one-to-one comparison of the features offered by the two streaming giants – Netflix and Disney+.

Netflix has 180 million subscribers, while DisnayPlus has more than 50 million global subscribers. Moreover, Netflix offers more than 5,760 titles on its largest multimedia repository, the US Netflix. Lucky for you, Netflix keeps adding more titles every day, including originals and from third-party studios.

We can safely say that no streaming platform can beat Netflix in offering such a vast entertainment library.

However, Netflix imposes geo-restrictions on its content due to the licensing agreement with different production companies. Fortunately, you can also consult the list of free VPNs for Netflix to unblock regional libraries to expand the streaming options.

On the other hand, DisneyPlus offers more than 1,000 original content by Marvel, Pixar, and Star Wars original content. Hence, you’ll generally find family-oriented content over Disney+ that you can enjoy with your family over the weekend. In addition, you can find all the iconic Mickey Mouse characters, Disney princesses, animated Marvel, and Star Wars series over Disney+ to binge-watch during the holidays.

Although Netflix has a lot of Marvel content; however, Disney+ streams an exclusive Marvel series of their own, including WandaVision, Loki, What If…?, Hawkeye, and The Falcon and the Winter Soldier. Alternatively, Netflix streams Daredevil, Luke Cage, Jessica Jones, Iron Fist, The Punisher, and The Defenders.

Netflix, however, offers all kinds of categories, including horror, dark, thriller, and action. The good news is you can find the age restriction for all the titles on Netflix, which is undoubtedly a relief for many parents.

The US Disney+ includes Star to offer adult-oriented content from ABC, Searchlight Pictures, and 20th Century Studios. However, Disney+ can’t beat Netflix in offering various original content. Nonetheless, Disney+ offers one of the greatest repositories of the animated classics from the House of Mouse.

Disney+ certainly offers a cheaper basic plan than Netflix; however, the price you pay is worth the content you see. Moreover, Netflix offers three types of plans to match the viewers’ streaming requirements.

Disney essentially operates three streaming services within the US, including, Disney+, ESPN+, and Hulu. As a result, you can either buy the standard monthly or yearly Disney+ package or buy the bundle packages with or without ads.

Unlike Netflix, Disney+ doesn’t offer multiple-tier packages. As a result, you can stream on up to four devices, download content on ten devices, and even watch the titles in HD.

In terms of offering a free trial, Netflix beats Disney+. Netflix offers a 30-day free trial, while Disney+ has a free trial for only seven days, bummer. Split Netflix and other expensive subscriptions with like-minded people to save money and time.

Hence, you have a month to browse through the Netflix catalog and explore different functionalities. Lastly, if you aren’t satisfied, you can cancel the subscription without paying any cancellation fee.

The main dashboard of Netflix presents content rows classified into different categories. FOr instance, you can include your favorite shows in “My List,” while “Continue Watching” allows you to resume the show episodes whenever you want.

Similarly, rows such as popular, new releases, comedy, action, thriller, and others allow viewers to browse through the available catalog.

Netflix also allows the viewers to rate the content by offering like, dislike, and love options. Hence, Netflix uses advanced machine learning algorithms and big data analytics to present the content according to the viewer’s preference.

Disney+ dashboard, on the other hand, also splits the content by rows. However, the primary difference between the two streaming platforms is that Disney+includes tabs.

This way, you can explore the content by brands such as Marvel, Pixel, National Geographic, and Star Wars. Also, you can view the collections, such as Musicals and Princesses. Both Netflix and Disney+ support kids mode to ensure parental control.

Sadly, the Disney+ app is a bit clunky on specific devices. For instance, you have to wait for at least five seconds before the app launches on the smart TV. It’s because the app first detects the Internet connection and then refreshes.

On the contrary, Netflix offers a smooth and quick launch on almost all devices.

Lucky for you, you can watch Netflix on several devices, such as laptop web browsers, smartphones, Apple V, Smart TVs, gaming consoles, Blu-ray players, and smartphones. On the other hand, Disney+ isn’t available on as many devices like Netflix, which can turn off certain viewers.

With so many online streaming platforms, you often find yourself at a crossroads. The key takeaway of the above article is to present a comprehensive comparison of the features offered by Netflix and Disney+.

If you wish to access unlimited streaming content of all genres, Netflix won’t disappoint you. Another advantage of subscribing to Netflix is the complete customization of the main dashboard to watch your favorite movies and shows.