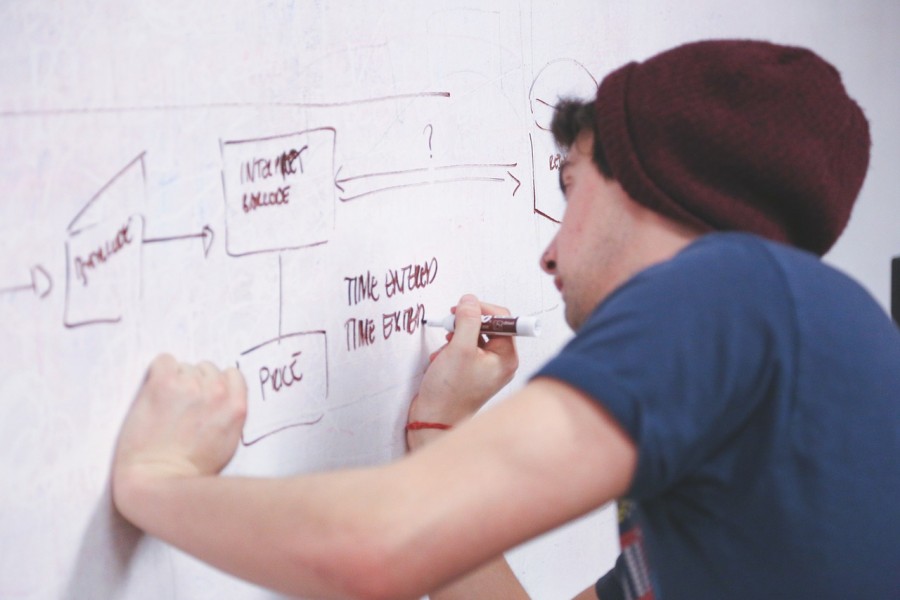 On the desktop environment, Microsoft Visio is a popular tool widely-used by software developers to create an UML diagram. What if you are not a Windows user? Then you can use online tools to work.

The biggest advantage of using an online tool is that you don’t need to install additional app. Also, you can work from anywhere through web browser, no matter the operating system you use. Following is the list of online diagramming tools that you can use to create UML diagrams. 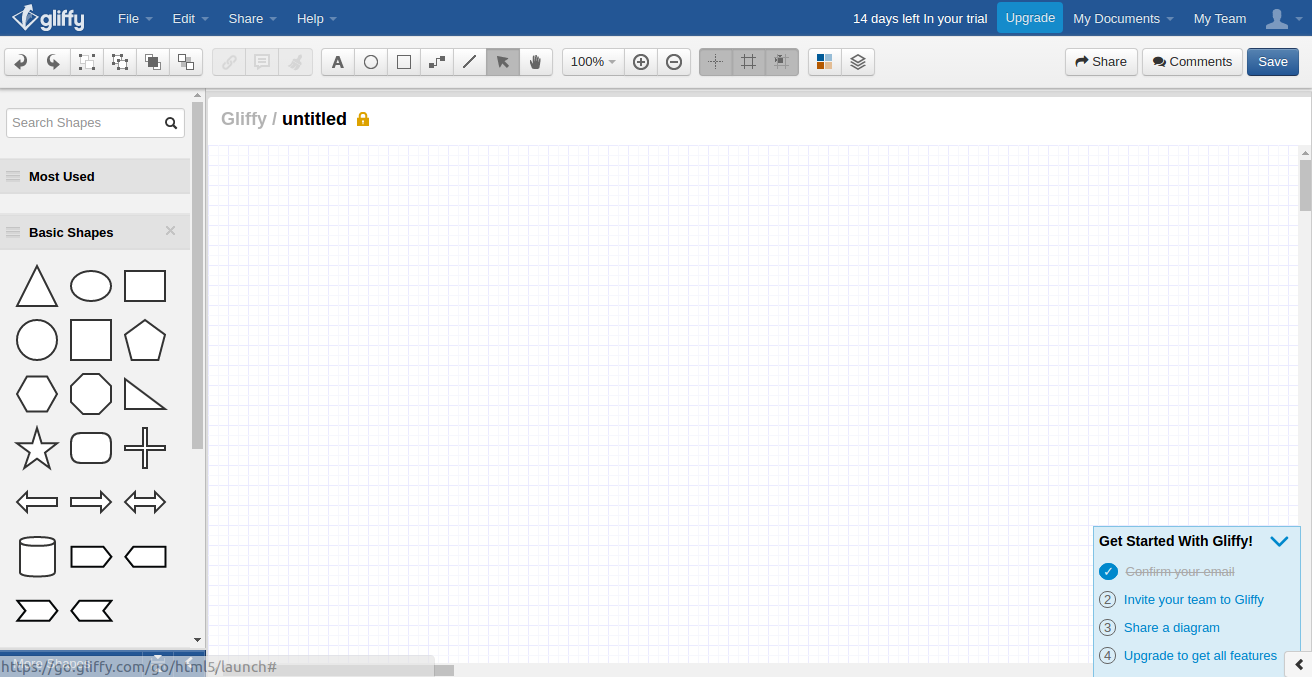 The first online diagramming software that has a capability to create UML diagrams is Gliffy. It is a freemium tool with the free version only allows you to create a single diagram, no more. Gliffy is a great tool if you have a team. You can use it as a collaboration tool. You can add your team members to work on an UML diagram together. One thing you need to know. Gliffy uses per user payment. Which means, the more you add your team members, the more budget you need to spend per month. Gliffy has a compatibility with Microsoft Visio. You can import and edit the UML diagrams you created with Visio using this tool. 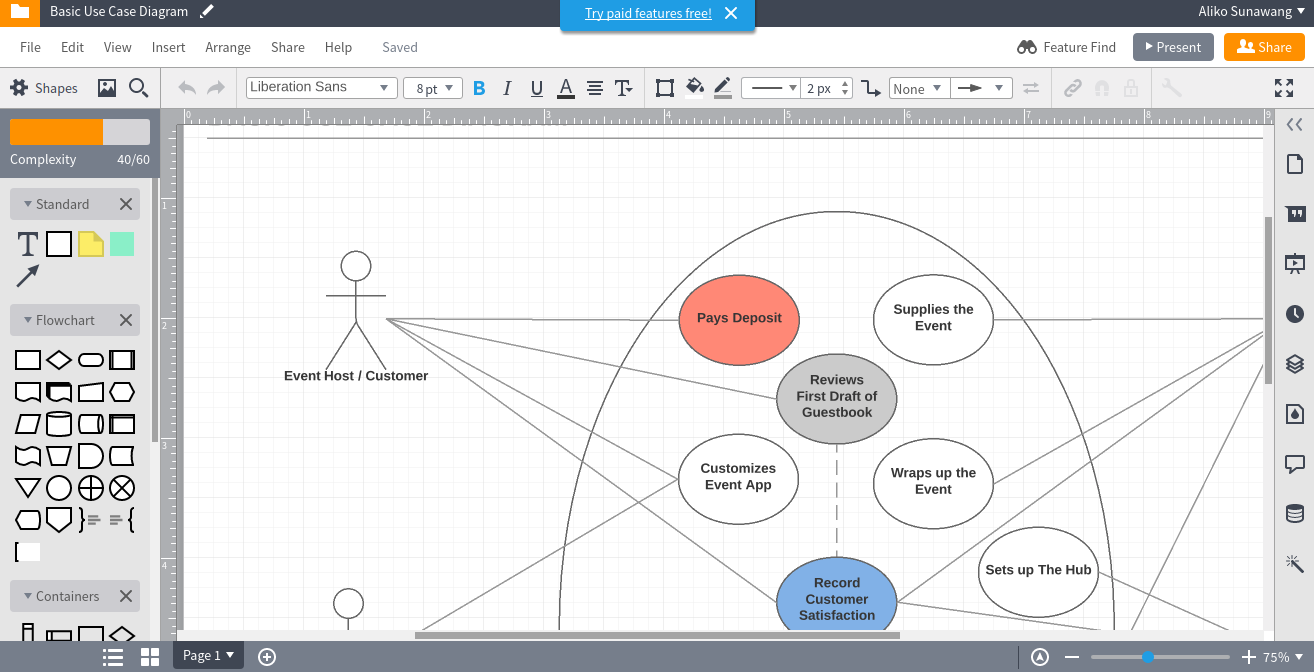 Lucidchart is also a great online diagramming tool that uses the freemium business model. Which means, you are allowed to use it for free although you have to work with some restrictions. Free account is only allowed to create the maximum of 3 diagrams. Free account is only suggested if you just need to create a diagram online once or two times. Lucidchart comes with a beautiful enough interface and it also offers a number of UML templates. This diagramming tool also has good file manager feature. You are also allowed to invite your team. Have some VSDX files? You can also import to Lucidchart and edit them. 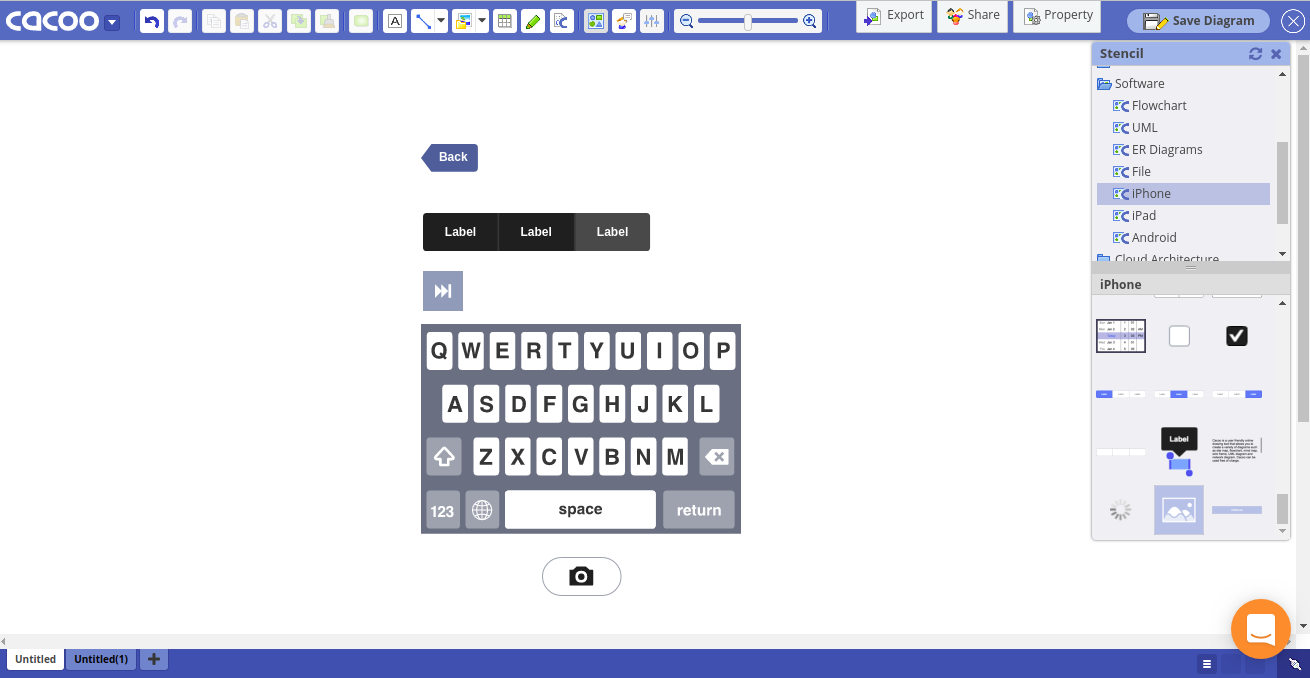 Want to develop an Android or iPhone app? Then Cacoo is the suited diagramming tool to create an UML diagram of the app you want to develop. This online diagramming tool has a bunch of symbols you can use on the UML of the app you want to dvelop. Cacoo also uses the freemium business model with the free version allows you create 6 diagrams. Cacoo also has a great file manager features whereby you are allowed to create folders to manage the diagrams you have created. Cacoo is not the tool you are looking for if you want to make a switch from Microsoft Visio. This tool has no compatibility with Visio. You are unable to import any VSDX file with it. Cacoo also allows you invite your team members to join your works. 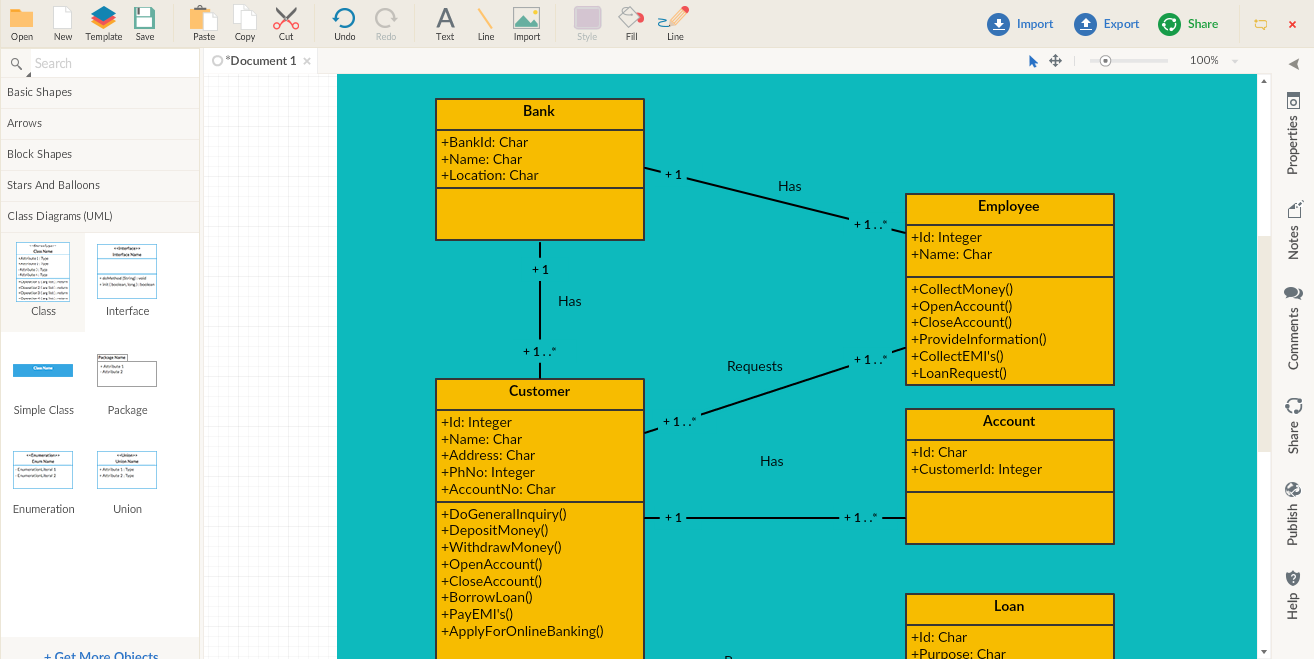 Creately is also a great online diagramming tool that has a capability to create UML diagrams. Creately is unbeatable in terms of diagram templates. This tools has a bunch of diagram template collections you can choose from. Creately also uses the freemium business model with the free version is allowed to create 5 public diagrams as well as inviting 3 team members. The free version of Creately also comes with a real-time collaboration feature. So, Creately is a great tool if you are looking for a free online diagramming tool to work on an UML diagram with your team. This tool also has a compatibility with Microsoft Visio. 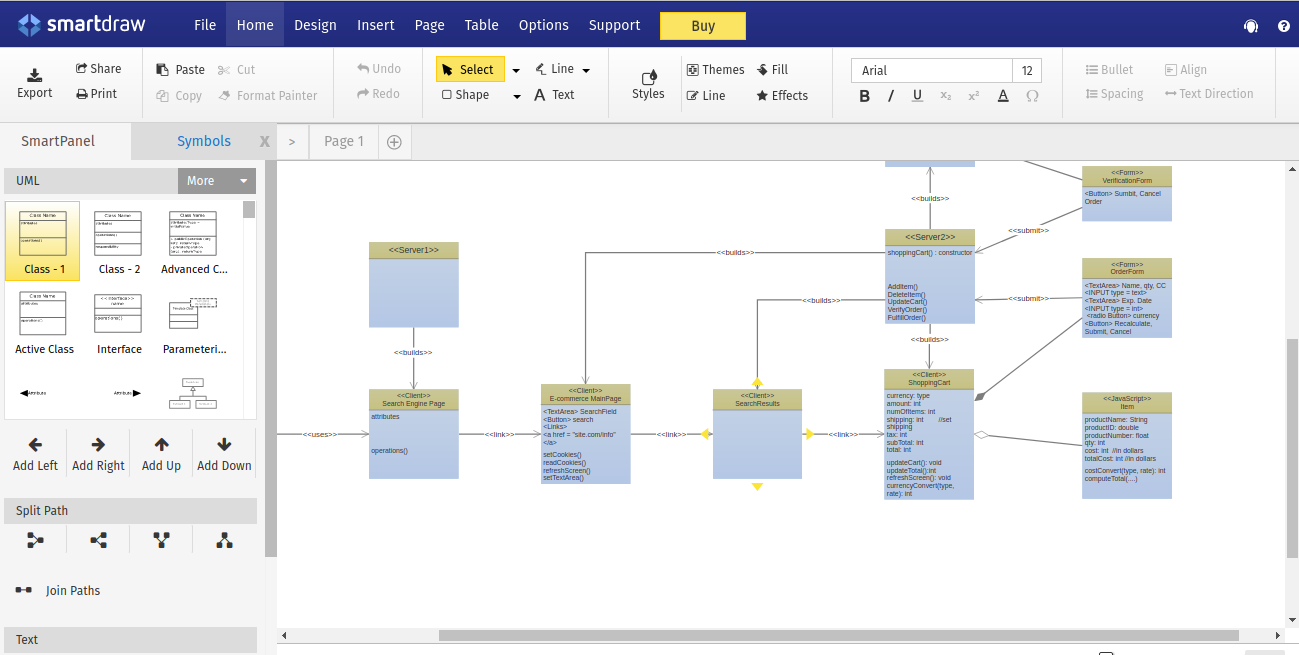 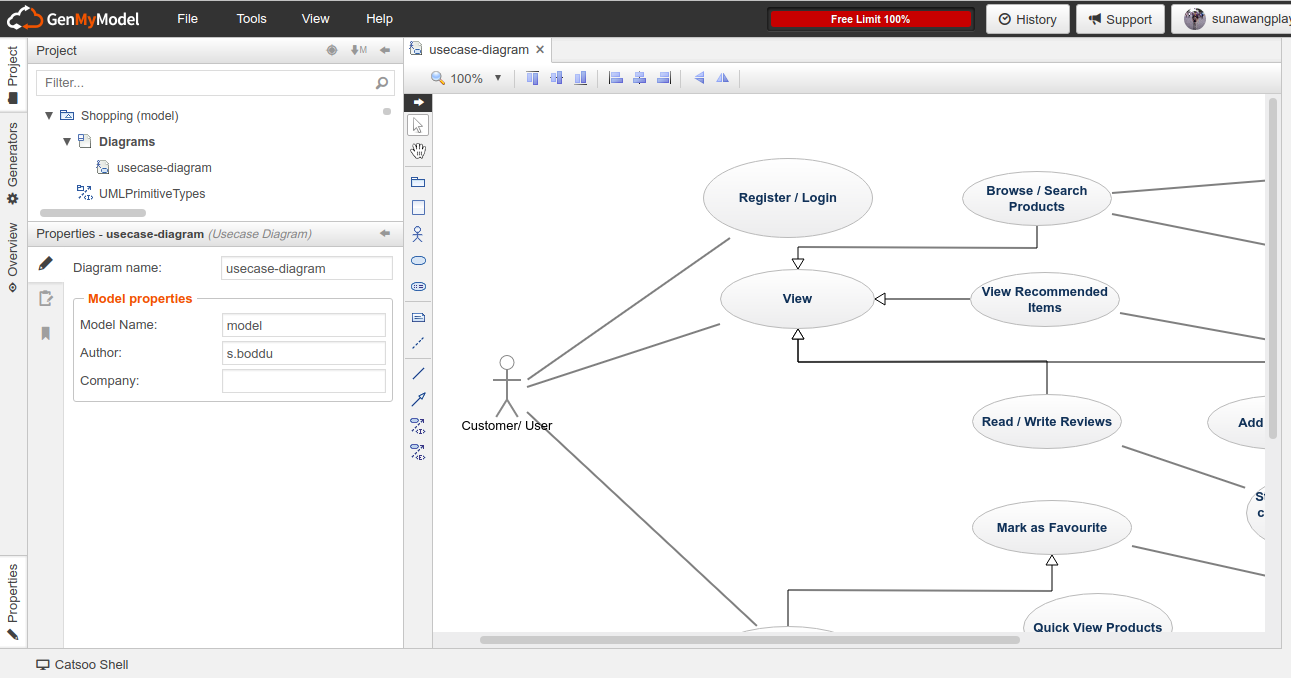 Anytime you need a tool to create an UML diagram online, you can also try GenMyModel as an alternative. Also uses the freemium business model, GenMyModel allows you to clone the UML diagrams from other users. Sure, you can also create your own UML from zero. GenMyModel isn’t also a tool you need if you look for an online diagramming tool to replace Microsoft Visio. It has no compatibility with Visio.

If you are looking for a fully free diagramming tool to create an UML online, I strongly recommend draw.io. Unlike all tools above which require an account, you can use this tool right away without creating an account. Best of all, draw.io is available as an open source software with the source is available on GitHub. draw.io is also available in two versions: desktop and web. This tool is also compatible with Microsoft Visio, meaning that you can open and edit a VSDX file using it. The downside of draw.io is that it doesn’t support collaboration.