10 Tools to Make Your Own Memes for Free

HomeInternet10 Tools to Make Your Own Memes for Free

10 Tools to Make Your Own Memes for Free 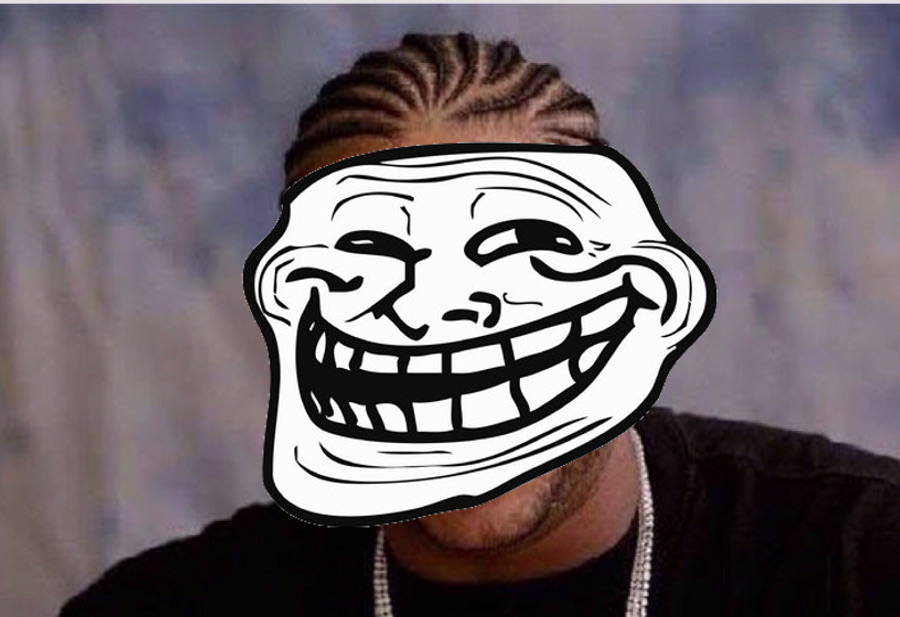 In today’s digital culture, we can’t really far away from meme. Meme is everywhere. On a WhatsApp group, Twitter, Instagram, Tumblr. These days, anything that happened is always followed by memes. From a football team defeat to the latest gossip of an artist. To most people, memes are such an entertainment although a meme doesn’t always contain a joke. To be clear, meme is a part of today’s digital culture.

By the way, did you ever created a meme?. If you haven’t yet, you should.

Creating a meme is fun and it can boost your creativity. There are many tools on the internet jungle you can use to make your own memes for free. Your capital is just your creative mind. If you get luck, your meme will be going viral and used by many internet users around the globe. And who knows, it will be spotted by 9GAG. However if what you want is to browse something that goes viral on social media, you can check out this Jimmy John Shark photo here and find out what made it viral!

Here are 10 tools you can use to make your own memes, for free. 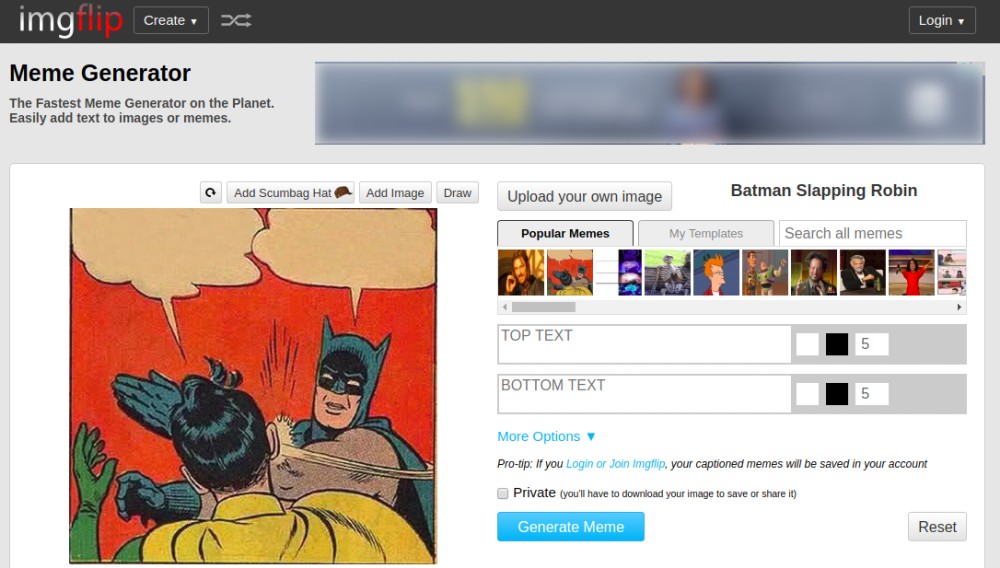 Imgflip is a website where you can find memes and animated GIFs. It also has a meme generator to allow you generate memes. There are popular images commonly used as a meme material like Batman slapping Robin, Leonardo Dicaprio Cheers to Bad Luck Brian. If you want, you can also upload your own images. Imgflip also features a simple drawing tool to allow you draw free forms or lines. By default, your text are located at the top as well as the bottom of the image, but you can drag and drop them anywhere within the image. 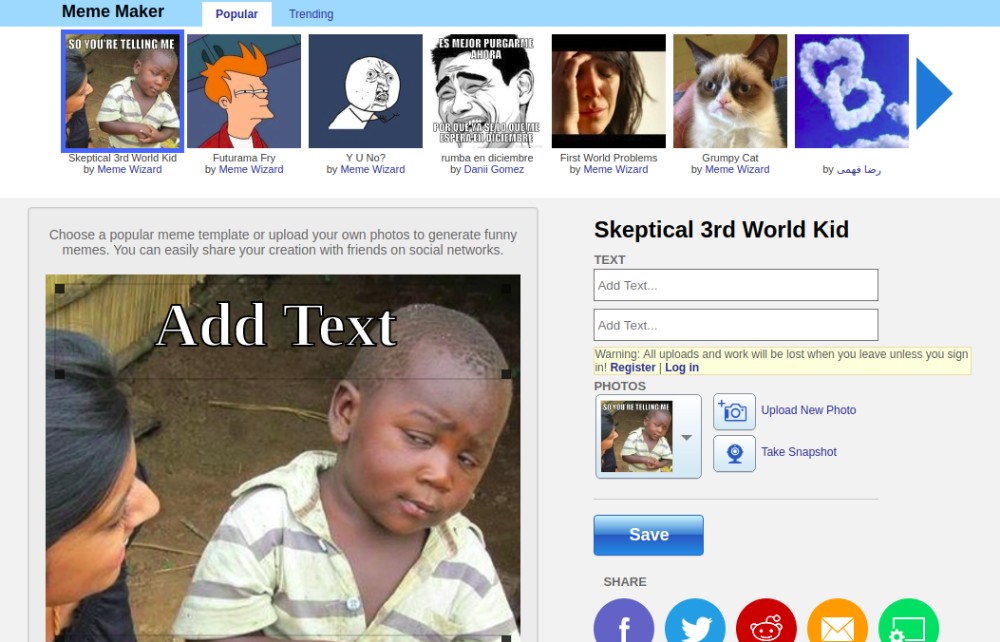 Anytime you want to create a meme, never forget ImageChef. This is also a great tool to generate memes from any genre. From funny memes to sad memes. There are popular meme templates you can choose from. Just replace the texts with your own words and you will get your meme. Want to upload your own image? You can do it too. ImageChef also comes with a drag and drop functionality to reposition your texts. Before being able to download your meme, you are required to create an account first. 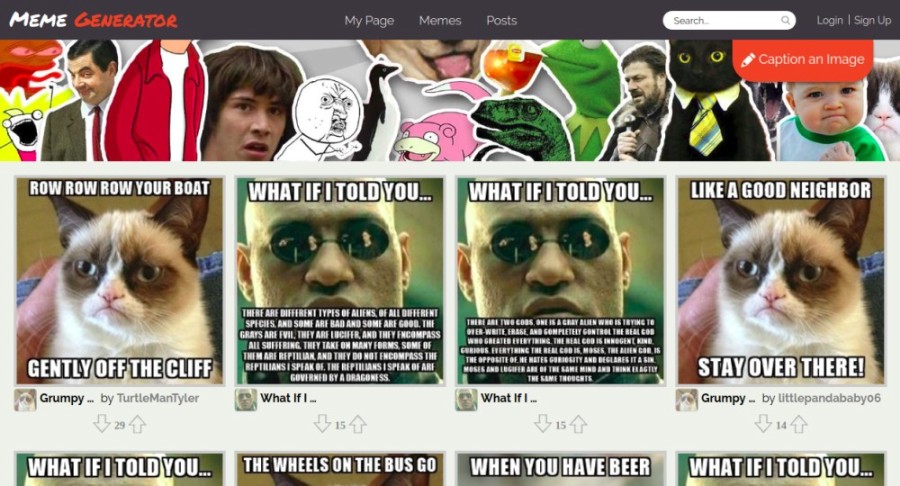 Like the name suggests, Meme Generator is an online tool that allows you to generate meme online. You are also required to create an account before being able to download the meme you created. Same as two first tools above, Meme Generator also has dozens collections of popular images. From that iconic Willy Wonka, Yo Dawg, Scumbag Steve and so on. At the front page of Meme Generator site, you can also see memes created by other Meme Generator users. 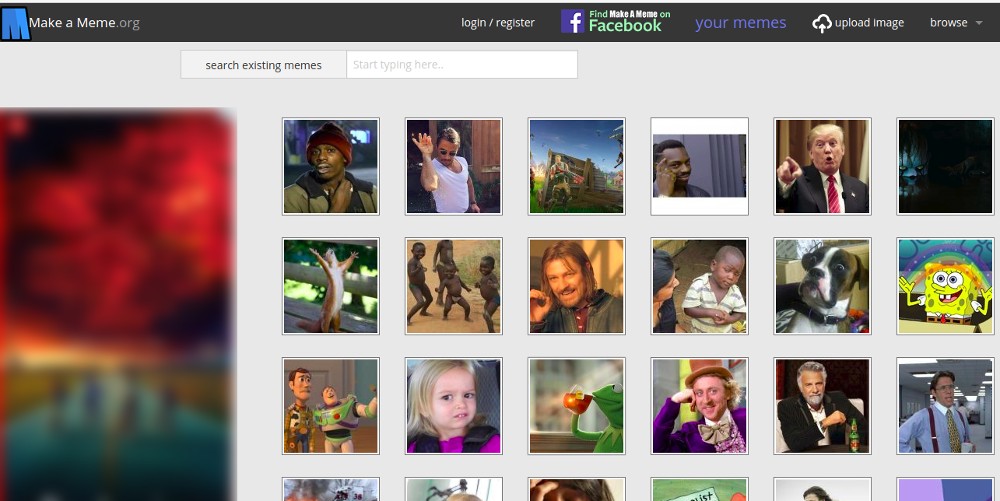 At the front page of Make a Meme site you will see tens of popular images. A pop up will appear if you click one of them. On this pop up you can add texts. Unfortunately, the text size and position is permanent. You can neither resize the text size nor the change text position. Once you done with your meme and pressed the “Make the Meme” button, you will be directed to the page of the meme you have created. A Reddit button above the meme allows you to share the meme you have just created to Reddit. The “browse” menu at the top-right corner of website page allows you to browse newest memes created by the Make a Meme users. 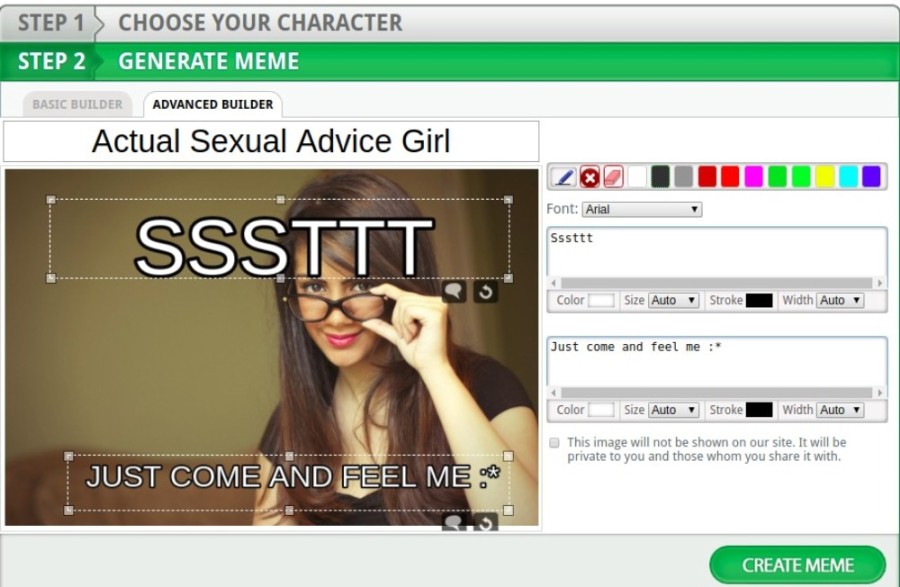 The meme creator offered by Memes.com has more features than, for instance, Make a Meme. Firstly, you can add text on the top and bottom of the image, respectively. If you think that the font is too bog, you can resize it. Or, if you don’t like the default color, you can also change the color to meet your taste. Furthermore, Memes.com also allows you to change the font style. There is also a simple drawing tool to draw lines and free forms. 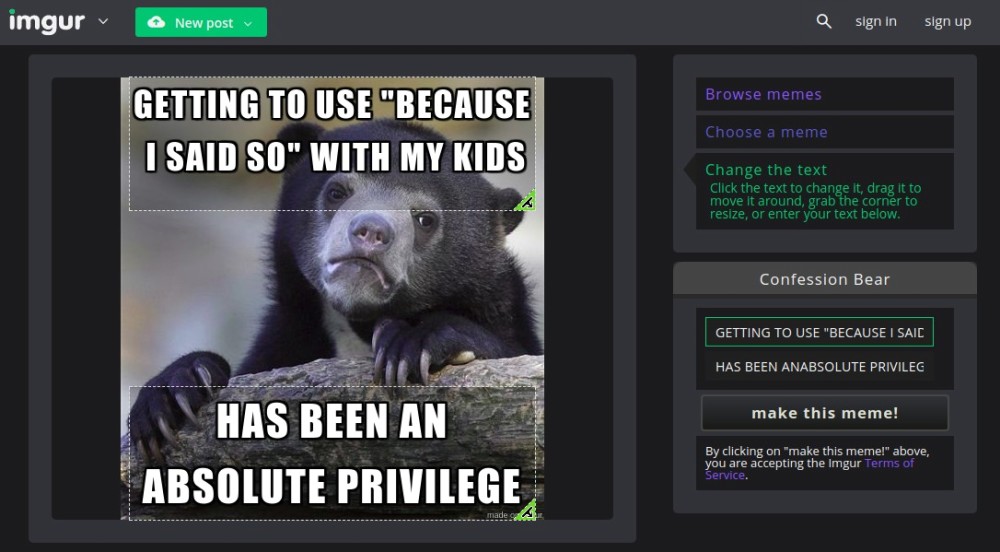 Imgur is better known as a free image hosting service. Many bloggers use it to host their images to save the limited storage capacity of their server. But, did you know that Imgur also has a meme generator?

To help you create memes, Imgur has also prepared many images you can choose from. Each image already contain texts but you can replace them with your own words. You can make a meme using Imgur without needing to create an account first. Once you done with the meme, you can share it directly on Twitter and Facebook. Or, you can also submit to Reddit. 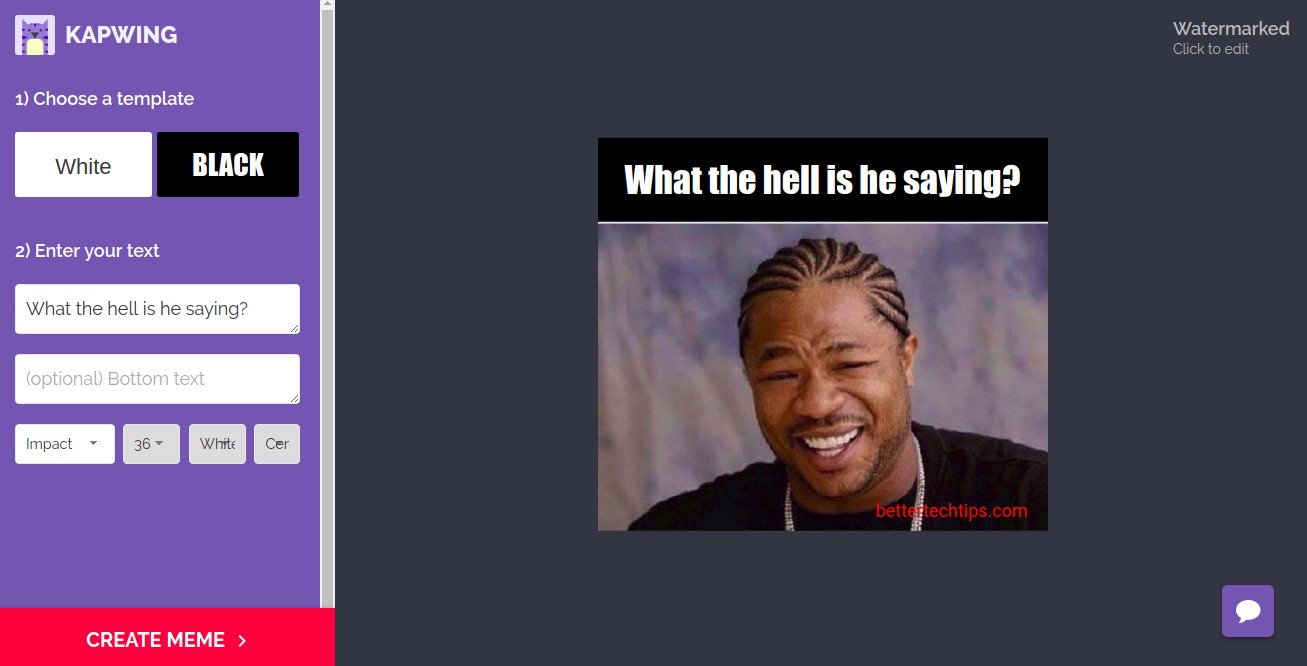 Kapwing is a bit different to six tools mentioned above. It doesn’t offer image at all. Instead, you have to upload your own image to create a meme. The good thing about Kapwing is that you can add a watermark to the meme you are creating, which is good if you are developing a brand and frequently join the public conversation about the happening issues. Kapwing provides two templates; blank and white. You can customize your meme by changing the default font style, color and size. 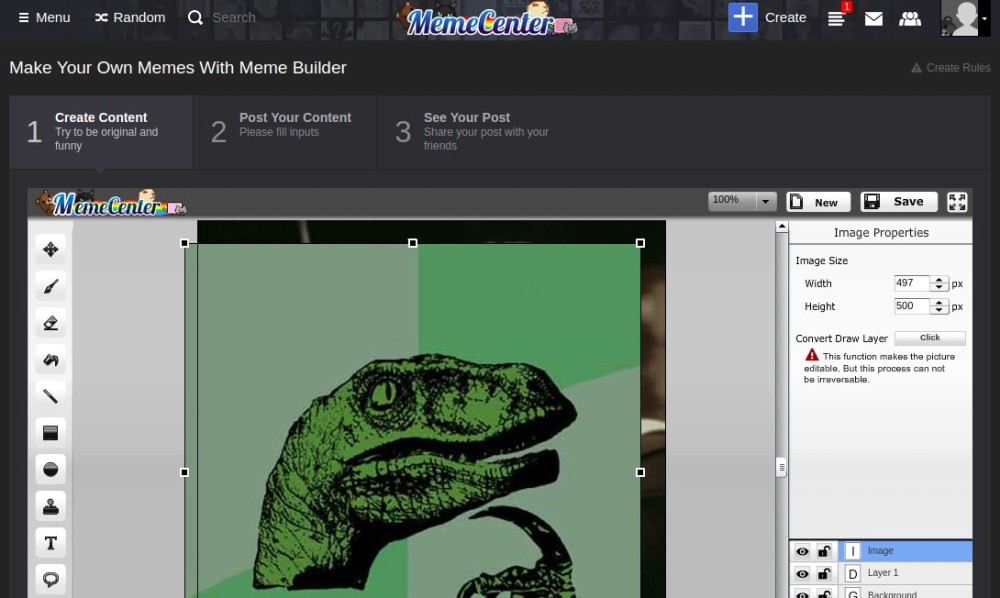 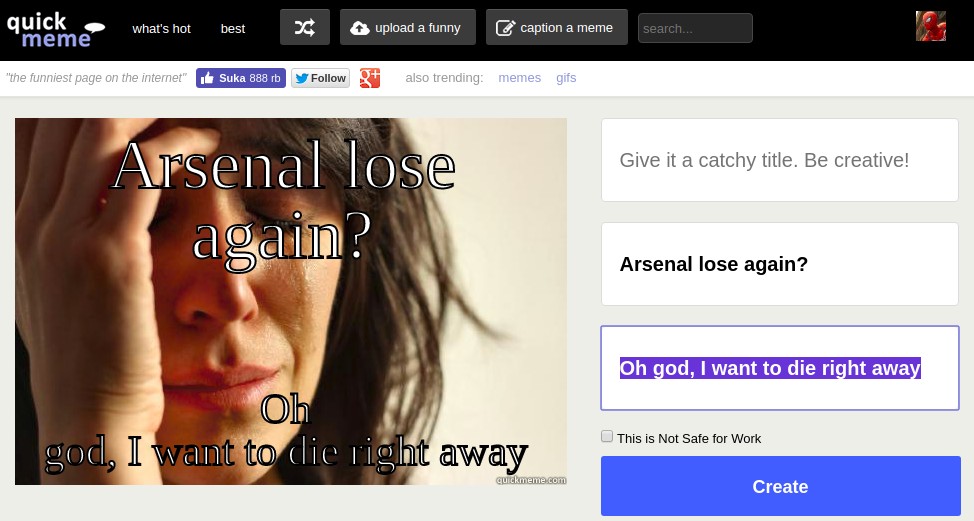 Quick Meme is also a website where people can show off their skill of creating meme, not far different to 9GAG and Meme Center. Apart from uploading existing memes from your computer, you can also create new ones using Quick Meme’s meme maker. To get started, you can click the “caption a meme” menu at the top bar of the site. But first, you need to login with your Facebook account. Quick Meme also has tens of image collections you can use as a meme material. 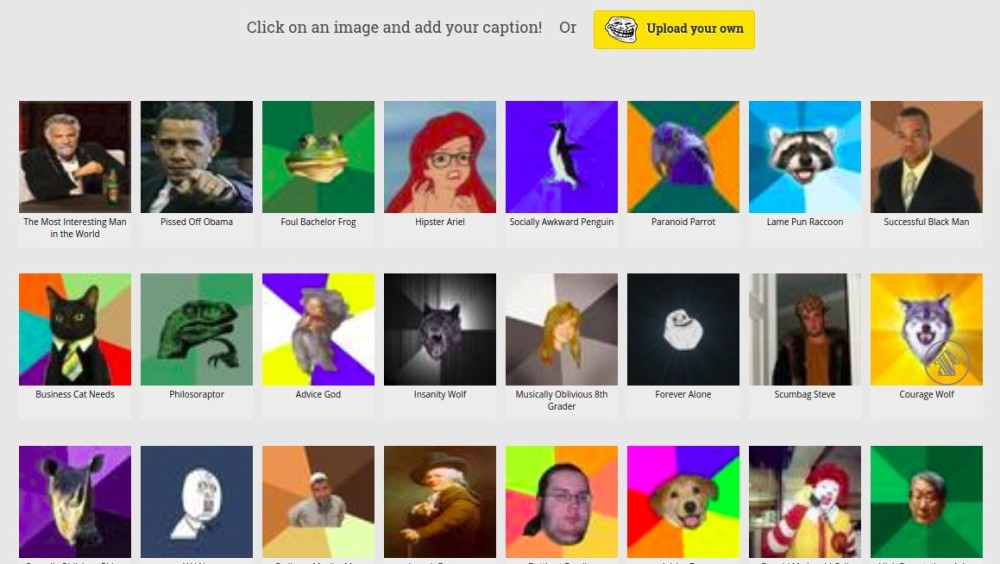 Another tool you can use to create meme for free is Troll Meme Generator. This tool has also prepared tens of memeable images you can choose from, although the way this tool works may not too impressive to you. You will be directed to too many pages only to create a meme. When you click a certain image, you will be directed a new page containing a “Generate New Caption” button. Simply click this button to add texts to the image. Troll Meme Generator allows you to create a meme without creating an account.