8 Best Online Comic Creators for Creating Your Own Comic

HomeInternet8 Best Online Comic Creators for Creating Your Own Comic

8 Best Online Comic Creators for Creating Your Own Comic 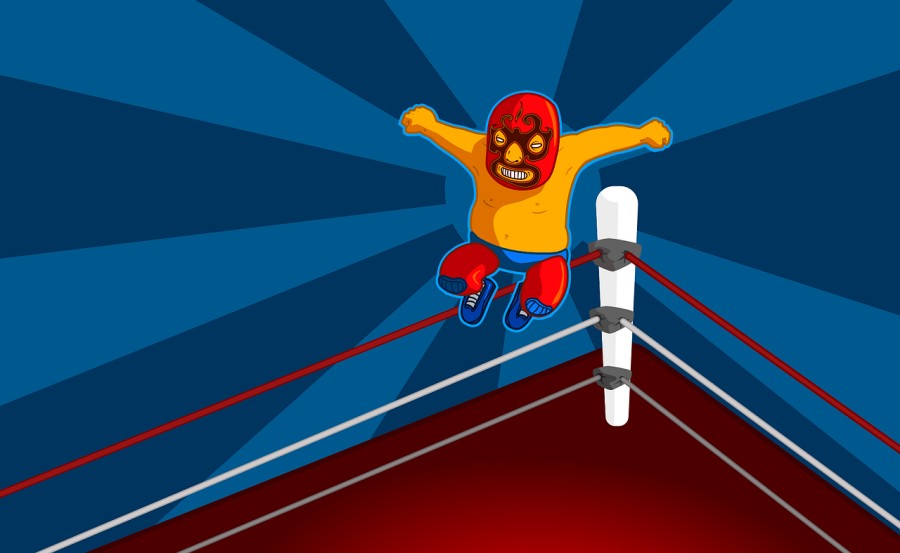 If you are an active user of social media, chances are you once met a certain account that regularly post a new comic every single day. Although the use of comic is commonly for entertainment need, there are also some brands that use comic strip to run certain campaign and educating market. You can check out some funny comic strip ideas here!

As I mentioned earlier, you can create  comic yourself even if you have no drawing skill. You probably have your own reason to create comic. Whatever it, here are the best online comic creators that you can use.

Pixton is a great tool to create comic online. You can create any kind of comic from comic strip, storyboard to graphic novel. There are plenty of ready-to-use characters that you can use as well as additional elements to make your comic be more attractive. When creating a comic you can select a background that is best suited to theme of the comic you are creating. Then you can select the offered characters. Pixton also makes it possible if you want to collaborate with your team/friends to create a certain comic. However, you need to upgrade your free account before being able to do it. Free account also doesn’t allow you download the comic. All you can do with your comic is share it to your social media accounts.

Pixton is a Flash-based online tool so be sure you have the latest Flash installed on your computer before using this tool. 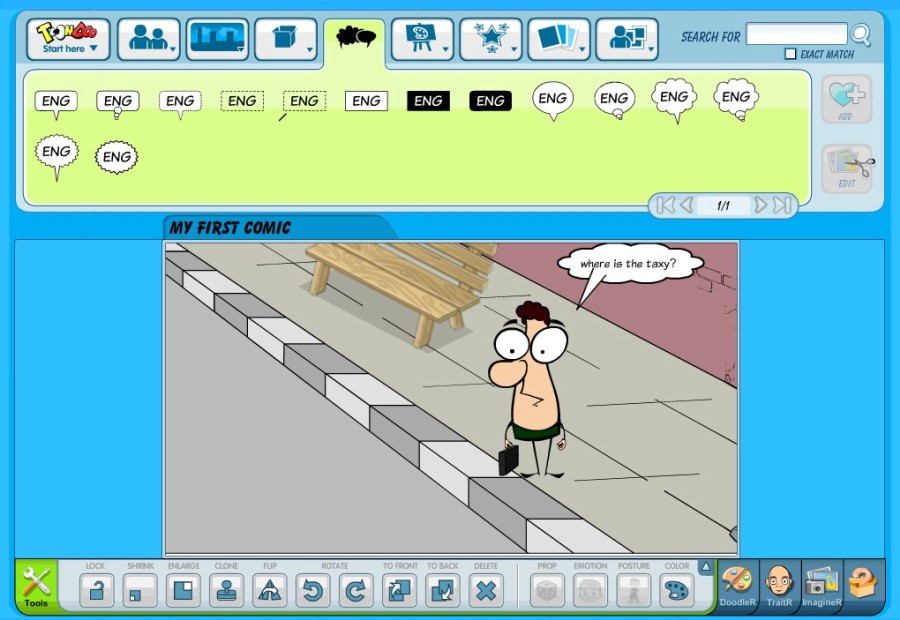 If you are looking for an online comic creator that allows you to download the finished comic for free, then ToonDoo is probably something you need. Well, the resolution of the comic is pretty small. Only 515 x 313 pixels. At least you can use it for your social media campaign or for a fun chat in your WhatsApp group. ToonDoo actually also offers a higher resolution of your comic file, but you will be asked to make a purchase to download it.

ToonDoo is also a great tool to create comic strip and other kind of comic. This tool offers richer characters than Pixton. You can also add more elements to the comic you are working on with this tool. TonDoo itself is also a Flash-based tool.

Canva is another great choice if you are looking for an online comic creator that allows you to download the comic file for free. This tool offers higher resolution than ToonDoo. Your comic will be converted into an image file with the resolution of 945 x 756 pixels. Plus, you don’t have to see a Canva logo like ToonDoo. Apart from image file (PNG and JPG), you can also download your comic in a PDF format.

Canva itself is actually not built specifically as a comic creator. Instead, you can also use this tool to create some image-related things like logo, banner, flyer, invitation and lots more. Unlike two tools above which relies on Flash, Canva is a HTML5-based tool. The downside of Canva is that it doesn’t offer ready-to-use characters like two first tools above. But, you can upload the image file of your own character if you have one. 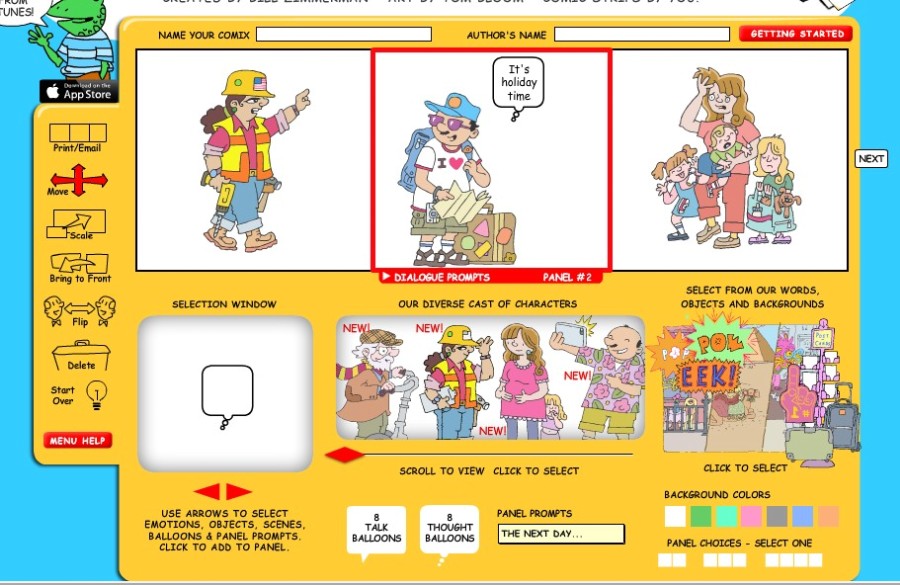 Make Beliefs Comix offers plenty of attractive ready-to-use characters. You can use all of the characters for free. This online comic creator is a nice tool to create a series of comic, especially for educational need. The rich offered characters enable you to create a story with plenty of different characters. You can also add additional elements to make your comic be more attractive. Including balloons, stuffs like suitcase, flag, disk and lots more. You ca also set the scene by changing the background of your comic.

There are plenty of cute black and white characters you can use on Stripgenerator. Items like cellphone, television, book, to clock are also available. Of course, you can also add some texts on the balloons. Before starting to create a comic you can also set your frame first. Sadly, this online comic creator doesn’t offer any chance to download your comic. You are given a chance to directly print your comic. Stripgenerator also relies on Flash. 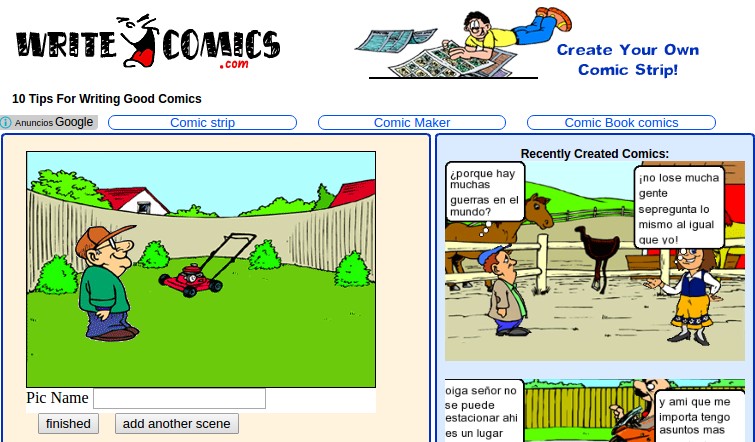 Write Comics is a very simple online book creator. May be too simple. This tool comes with a very lack of feature, but if you generous enough to give this tool a try then there is no bad with it. Just to inform that this tool doesn’t give you a chance to download your comic. There is even no option to share it on social media. But who knows the developer of this tool will make some enhancements in the near future. 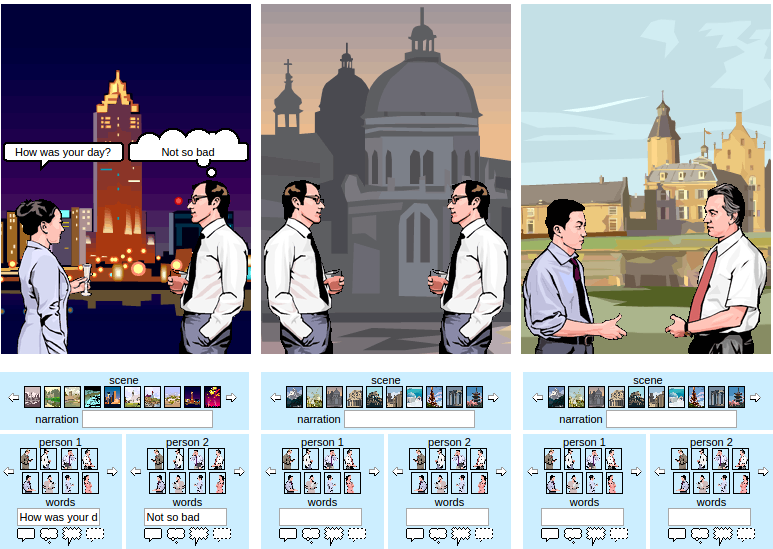 Witty Comics is a nice online comic creator that is best suited to create a business-related comic. The characters offered by this tool are limited enough. They all have a neat clothes on their bodies. There is not much you can do with this tool. This tool is lack of features like Write Comics.

As the name suggests, Storyboard That is an online comic creator with the focus to help you creating a storyboard. Storyboard That is a feature-rich tool. There are plenty of ready-to-use characters you can use as well as other elements like backgrounds, shapes and texts. But, you need to know that Storyboard That is freemium service. To enjoy all of the offered features you will probably be prompted to upgrade your free account.

Free account of Storyboard That is limited to 2 comics per week. There are plenty of layouts you can apply to the storyboard you are working on.