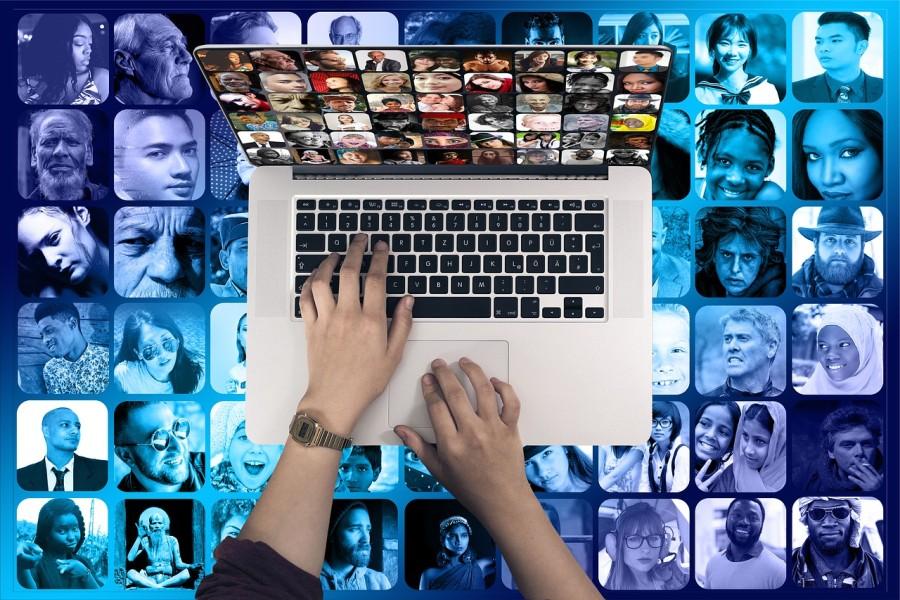 Slack is one of the most popular team communication tools. This tool allows you to create virtual workspace so you can work remotely with your team without limitation of space. Tools like Slack are great for startup businesses which have no headquarter yet. They can be a hub that connect your distributed team to share business resources and anything that need to share with.

It’s true that Slack is a favorite team communication tool, it’s an undeniable fact. However, popular doesn’t always mean the best. Slack, regardless its popularity, is not the only team communication tool out there. There are many other alternatives in case you don’t like Slack. Or simply the offered pricing plans don’t suit you.

Below is the list of the best team communication tools you can use as Slack alternatives. 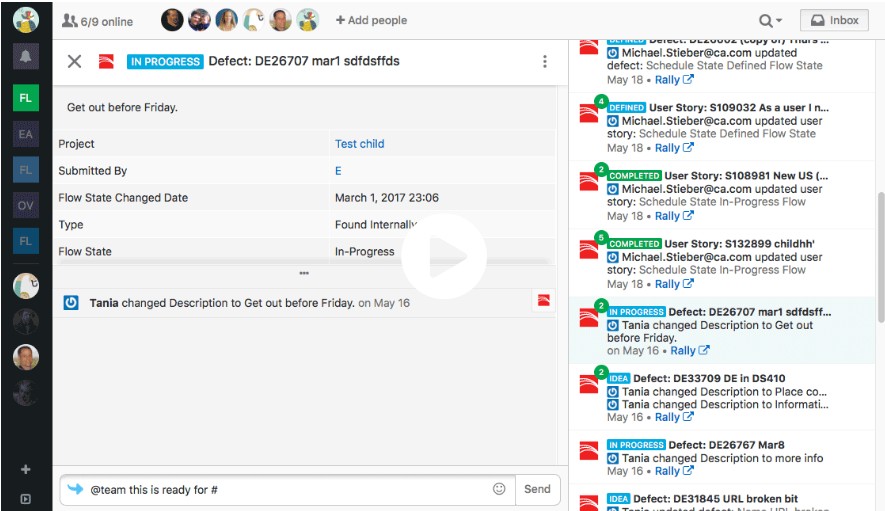 At a glance, there is seems no difference between CA Flowdock and Slack. This tool can also be used to create open spaces to have your team members (and anyone) join and get updates over the latest news of the business. This tool also comes with a wide range of integrations with services you probably already using like GitHub and Trello. In addition, CA Flowdock is also available for all major platforms including Mac, Windows, Linux, Android, iPhone and web as well. The biggest difference is in price.

CA Flowdock doesn’t offer any free version. You have to subscribe to at least Standalone plan which cost $3 per month per user. There is a 30-day trial period you can take advantage of before deciding to subscribe to one of the offered plans. CA Flowdock is likely more ideal for companies with bigger team in number. 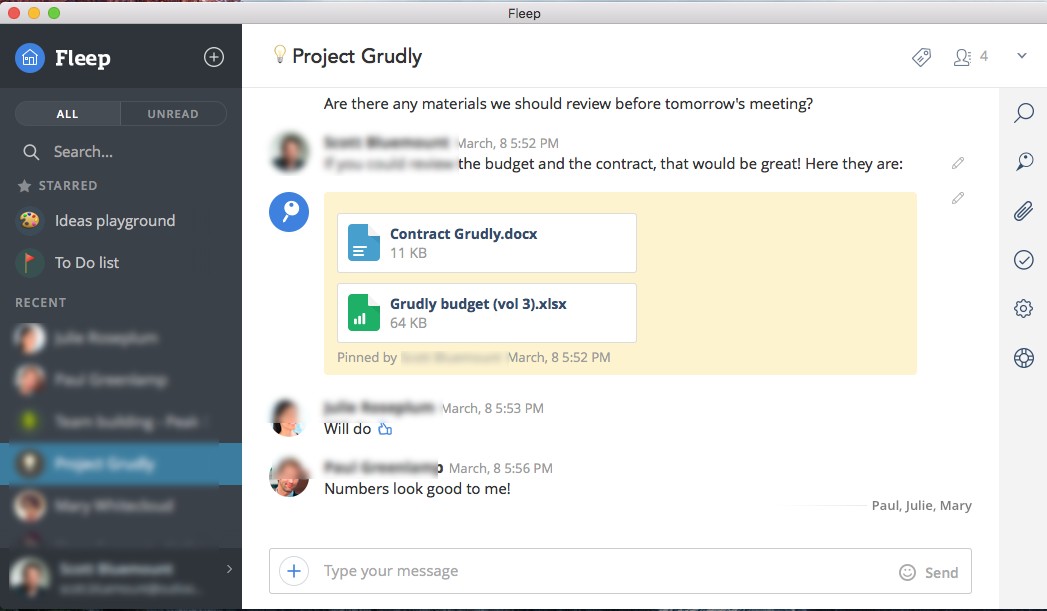 Fleep is a team communication tool created by a number of ex-Skype engineers. Unlike CA Flowdock, you can use Fleep for free just like Slack so you can save your startup monthly outlay. Free version of Fleep comes with rich enough features and capabilities. You can have unlimited conversations and most importantly, you can add as many team members as you want. Free version comes with a 10GB file storage.

Fleep is also an open platform so you can communicate with any other Fleep user – whether they belong to your organization or not. Fleep can also handle it if you need to have video or audio call. Popular services like Trello, Dropbox and GitHub can also be integrated with Fleep. For app availability, Fleep is available for nearly all platforms including Linux, Windows, Mac, Android, iPhone. 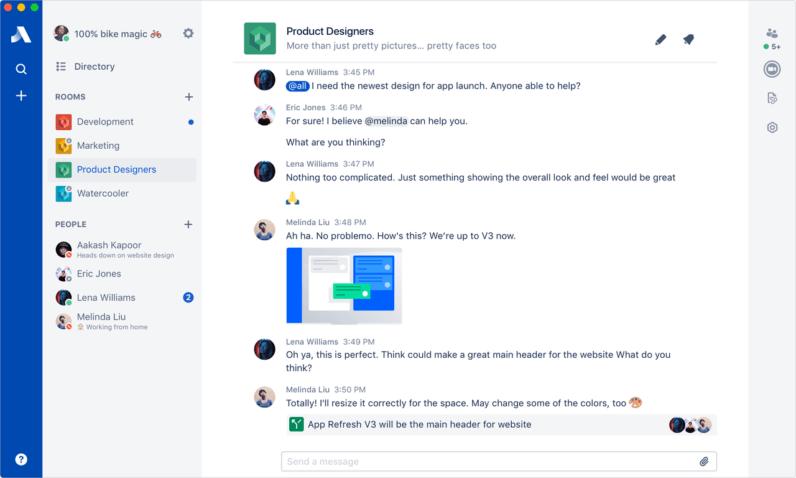 Stride is one of the Atlassian’s products. Atlassian itself is an Australian software company behind well-known products such as Trello, Jira and Bitbucket. You can also use this app to have a better conversation with your team member, whether it’s via group chat, voice conference or video conference. Since Stride is developed by the same company as Trello, you can also effortlessly connect both of them.

Stide is a great professional chat app for a startup with a tight budget or freelancers who are getting involved in certain project. You can use this chat app for free without too excessive restrictions. This app is also available for all major platforms. From Mac, Windows, Linux, iPhone and Android. 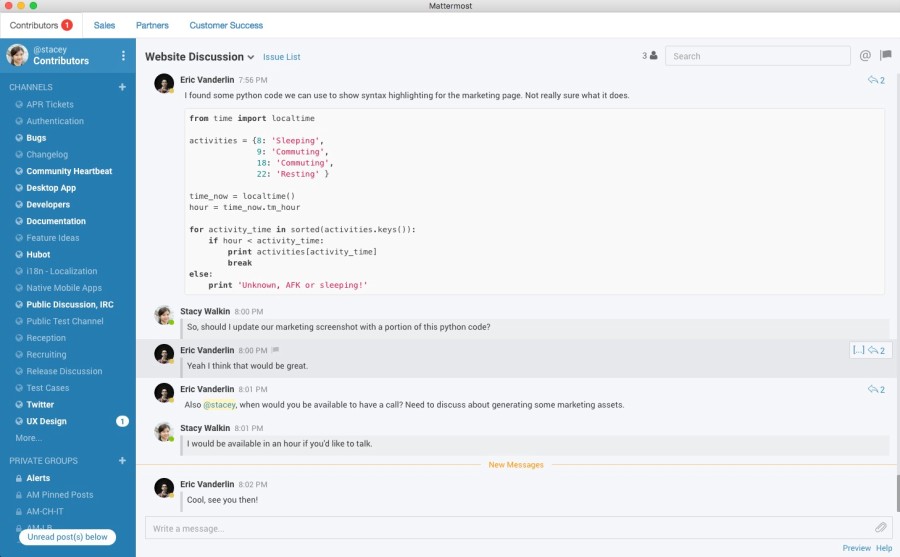 Mattermost is an open source project that is projected as a Slack alternative. This is a nice solution if you want to build your own team communication tool instead of relying on cloud-based tools like Slack and three tools above. Mattermost is available in three versions, Team Edition, Enterprise E10 and Enterprise E20. Team Edition is the version whereby you are allowed to download the source code for free under the MIT License. The client app of Mattermost is available for all major platforms just like three apps above. 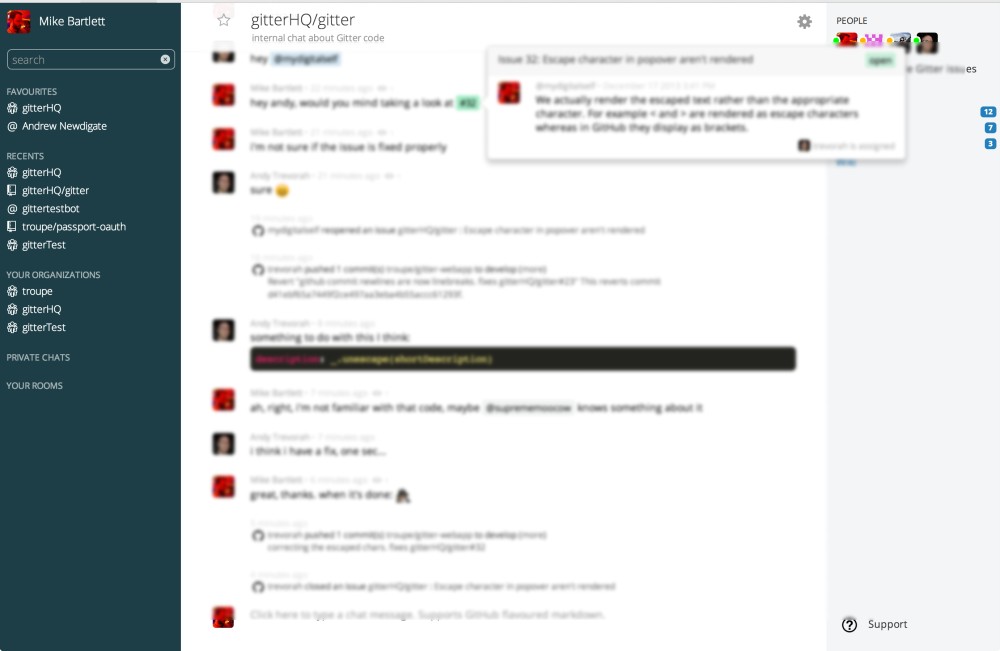 Gitter is a team communication tool that is more specifically great for app developer who use GitHub. Gitter has open source library on GitHub used to instruct a user on how to set up webhooks for a particular external service. When that service POSTs to gitter.im, this library is again used to parse the incoming data and get a human readable message. Gitter.im then displays the message in the user’s activity feed.

Gitter can be used for free. In addition to web, you can also use the client app of Gitter on desktop and smartphone, no matter the platform you use. You can also use Gitter to create an open space which is great if you have a public project and let anyone joining the project. 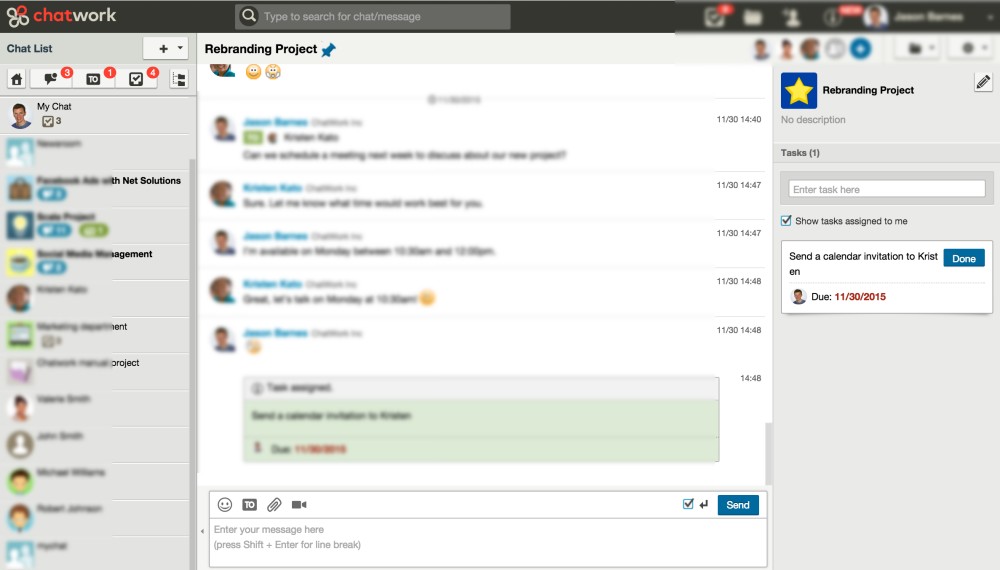 ChatWork is a Japanese team communication app. Same as Gitter and other similar apps, ChatWork is also a great tool for app developers who use GitHub since they can integrate those two. The downside of ChatWork is that it doesn’t provide a client app for Linux users. Whereas, all tools mentioned earlier above did. Same as other tools above you can also ChatWork for free, but with some limitations. Free version is only allowed to create 14 group chats. According to ChatWork, its service has been used by by over 153,000 companies from 205 countries. Interested to become the next one?

If you need some reasons why do you should put Flock first before Slack, Flock has provided a comparison page here. 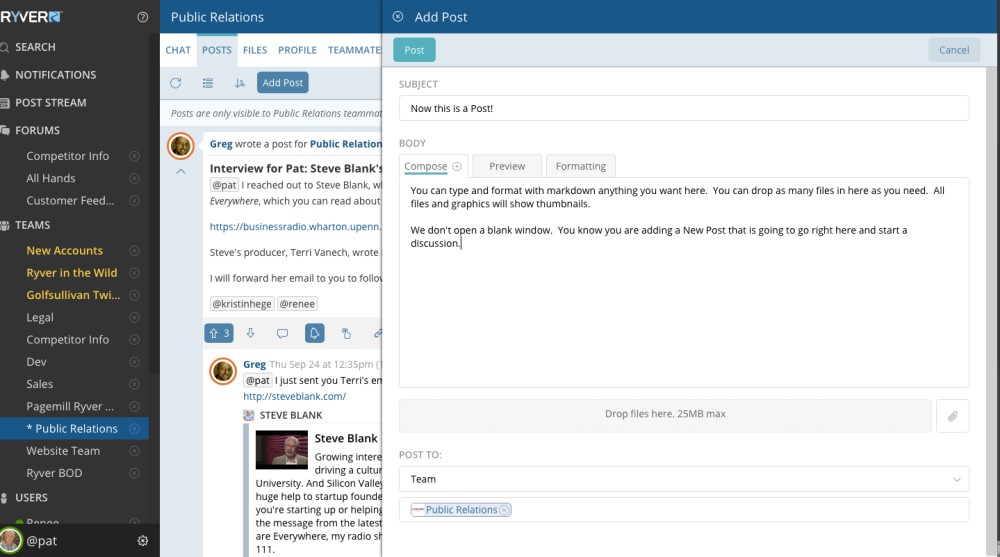 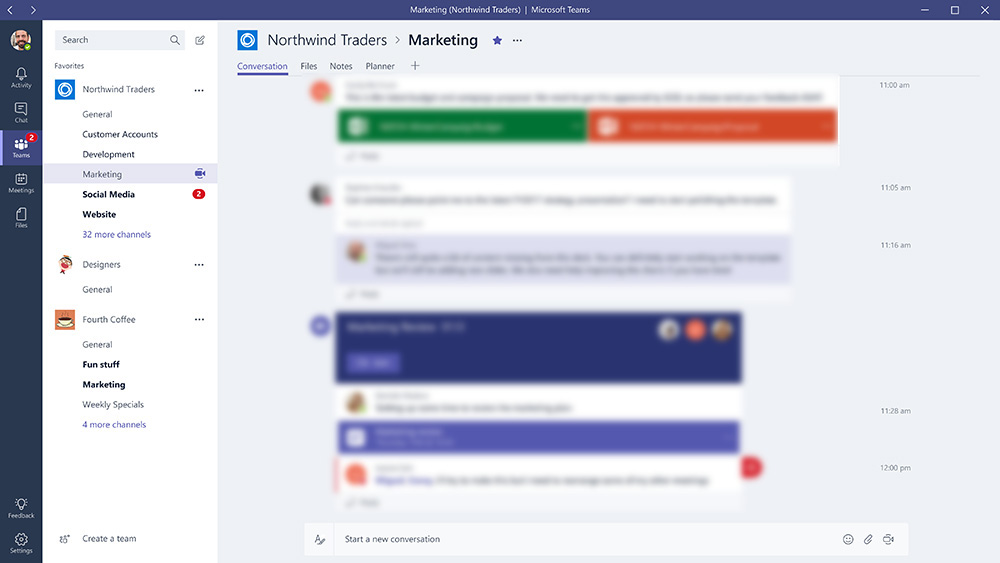 Microsoft Teams also supports integrations with apps like Trello, Asana, GitHub to Hootsuite. There is a sucks prerequisite you need to meet before using Microsoft Teams. You or your company have to be a Office 365 user. In addition, there is no free version offered by this tool. Microsoft Teams tends to ideal for those who have been a Microsoft’s cloud services user like OneDrive and Office 365. If you haven’t, then Microsoft Teams is not a good choice.

How to Build a Messaging App?