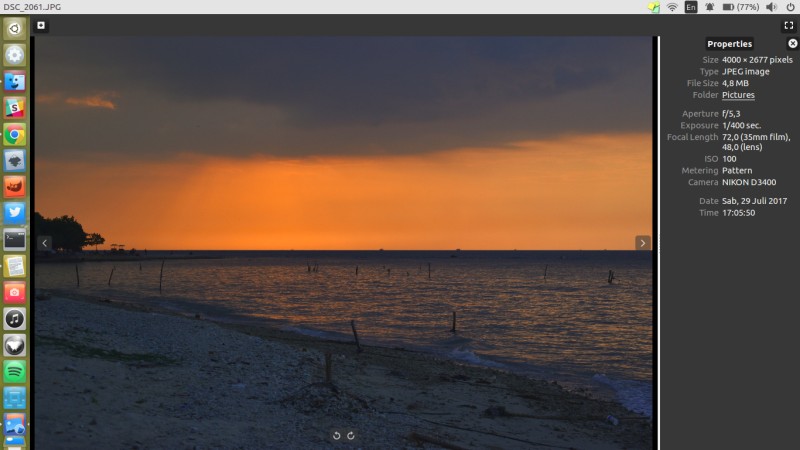 Each Linux distribution has basically been equipped with an image viewer app. Default image viewer of each distro commonly has the capability to preview both PNG and JPG files. Some image viewers even have the capabilities to perform basic editing like cropping the images, strengthen, rotating and lots more.

For photographers, there is no feature they expect from an image viewer than its capability to show the Exif data. Exif data contains such basic information regarding the photo as ISO speed, aperture, shutter speed and lots more. This data is embedded in each photo. Exif data is so important for photographer. Particularly information about ISO, aperture and shutter speed which also called as the exposure triangle. Unfortunately, not all Linux image viewers have the capabilities to show all the exposure triangle elements.

Ristretto for instance. The default image viewer for Xfce doesn’t display all the elements of the exposure triangle. 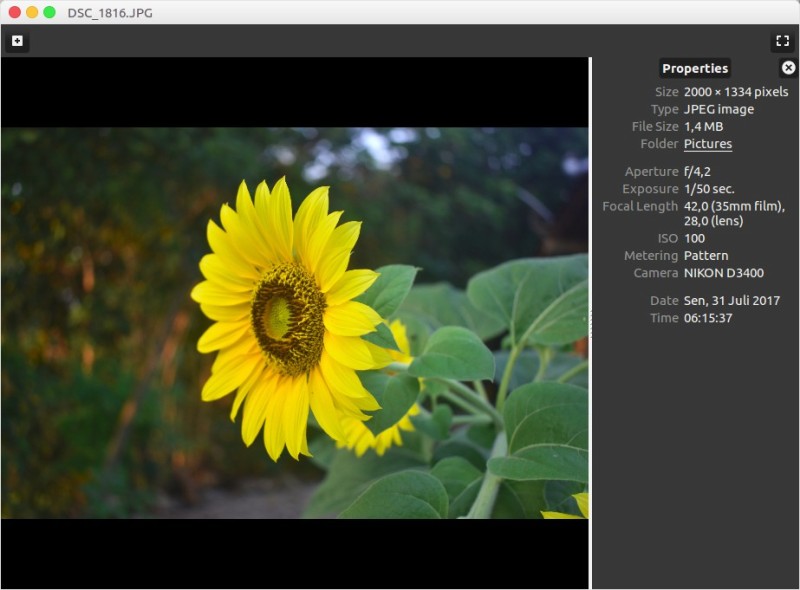 If you use Ubuntu or other distro that use GNOME as its default desktop environment then you must have familiarized with Eye of GNOME. In the application list on your GNOME-based distro you probably will see the name of “Image Viewer” instead of “Eye of GNOME”. It’s the same stuff. Eye of GNOME is a cool image viewer with a very simple interface. This app comes with a number of features to enable you perform some things to the image you are opening like rotating, running slideshow and lots more.

Eye of GNOME is great for photographers since it displays three major elements of Exif data, from ISO, aperture and shutter speed. You can display those information by activating the side panel from the View menu. 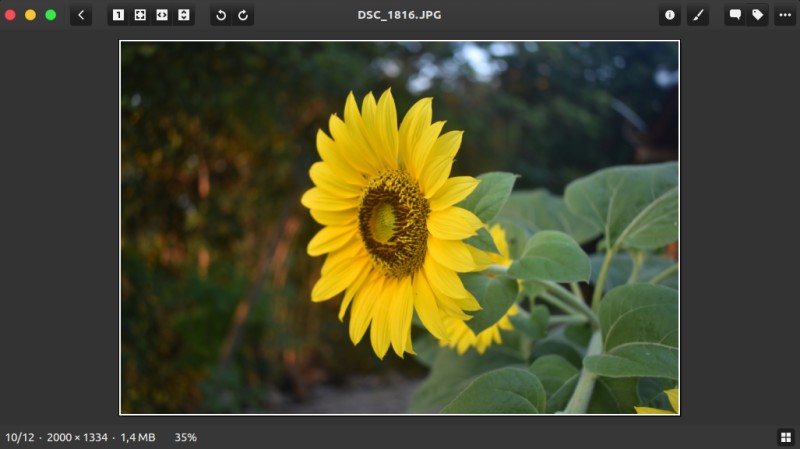 gThumb is also part of GNOME project. Written in C, this image viewer was built based on another Linux image viewer, GQview. gThumb was built to be a simpler image viewer and yes, the result is not too bad. The overall features of gThumb are not far different to Eye of GNOME but, it has more features and capabilities. gThumb has more editing tools. It also has a feature to add additional information for Exif data including image description, title, credit, and lots more. Furthermore, you can also import images from such services as Flickr and Facebook.

To view the Exif data of the photo you are viewing you can click the exclamation mark icon at the menu bar. You will also see the exposure triangle elements from ISO, aperture and shutter speed. 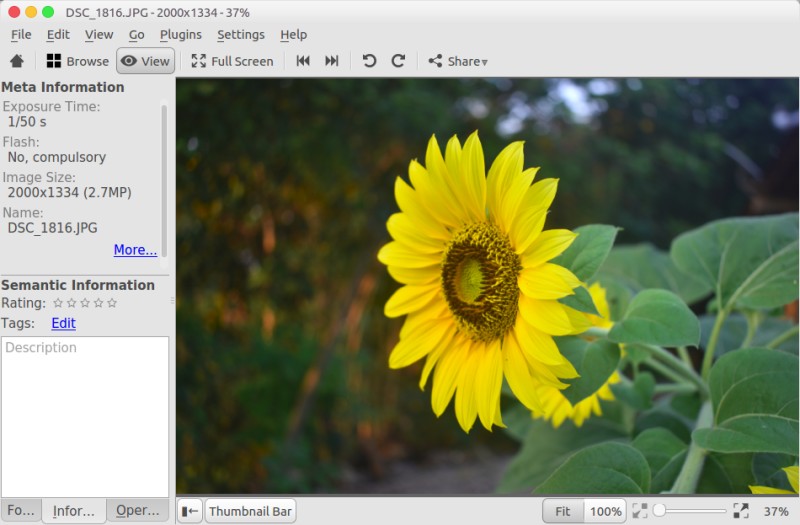 Gwenview is part of KDE project. If simplicity is the thing you consider the most when choosing an app then Gwenview might less suits you. There are too many visible menus and options that are supposed not to be displayed by default. It makes the interface of Gwenview looks a bit too crowded. You can also be able to see the Exif data of your photo with this tool but more efforts are required to find the exposure triangle elements. But, if you have no problem with it then Gwenview is worth to try.

Gwenview also comes with basic editing tools to resize, crop and rotate the images. You can also activate the slideshow mode to see all of the photos from your latest photo shoot. 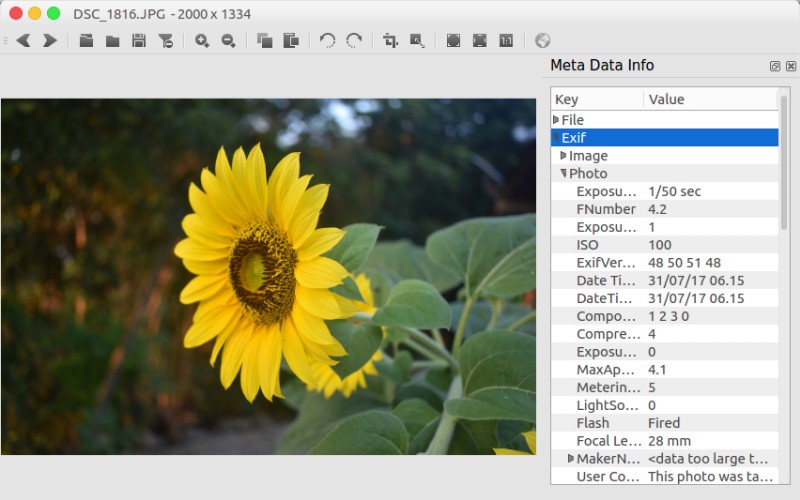 The three image viewers mentioned earlier above were built specifically for Linux platform and supported by the well-known open source communities KDE and GNOME. Nomacs is a bit different. This image viewer was released as a multi-platform app which is available for Linux, Mac, Windows to BSD. Even so, this app is released under the GNU General Public License v3.

One of the appeal things of Nomacs is that its capability to view RAW and PSD images. You can view the Exif data of the photo you are seeing in either semi-transparent panel or side panel. Unfortunately — same as Gwenview — you will also need to take more efforts to see the exposure triangle elements as there are so many information are displayed. 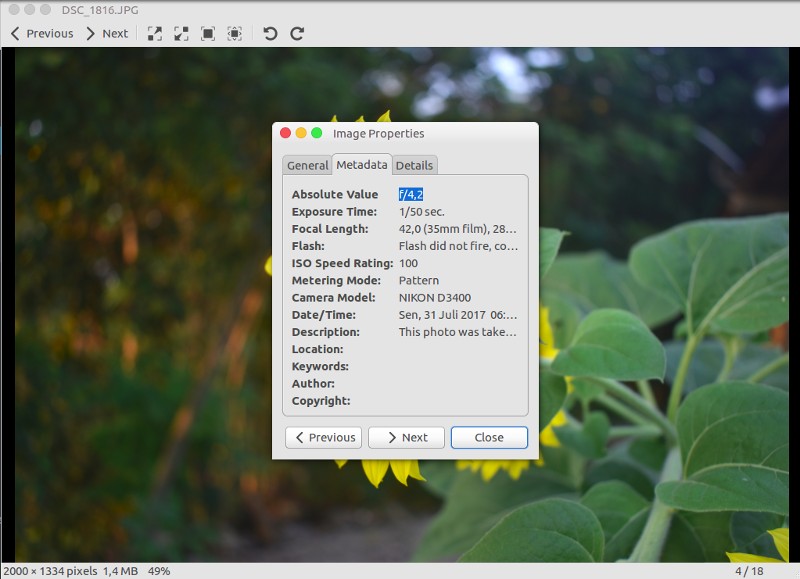 Eye of MATE is the default image viewer of MATE desktop environment. However, it also runs very well on other desktop environments. At a glance it seems there is no different between this image viewer and Eye of GNOME but once you dig deeper you will find some differences in terms of features and capabilities. The interface of Eye of MATE is very similar to GNOME’s. They both have a very simple interface.

Eye of MATE is also capable to view the exposure triangle elements of a photo. You can see those information from the Properties options which is located at the Image menu. Basic things like displaying slideshow and rotating the images can also be done with this Linux image viewer. 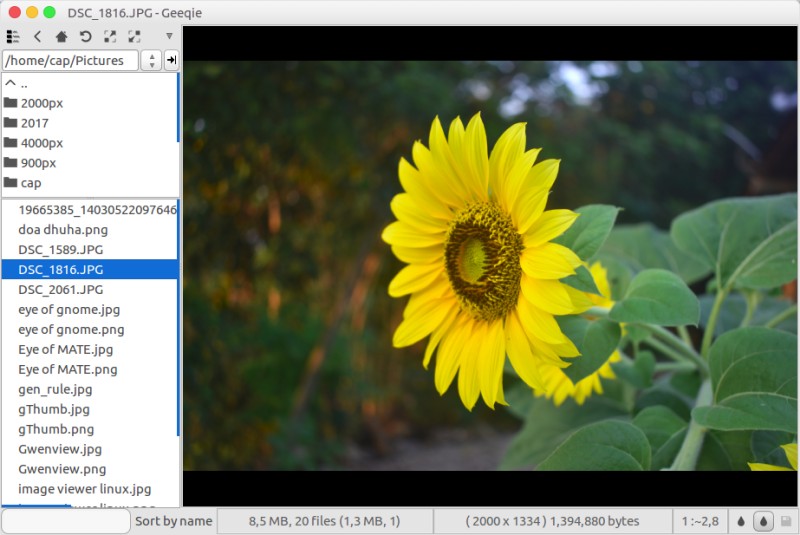 If you need to preview RAW files in Linux then Geeqie would be the great tool. Apart from regular formats like JPG and PNG, this image viewer is also capable to preview that image format (RAW). Geeqie was developed as a fork of GQview, which appeared to have ceased development. This image viewer was firstly launched in 2010. It was built using the GTK+ toolkit. You can also display the Exif data of an image you are seeing but it requires more efforts since so many information are displayed. 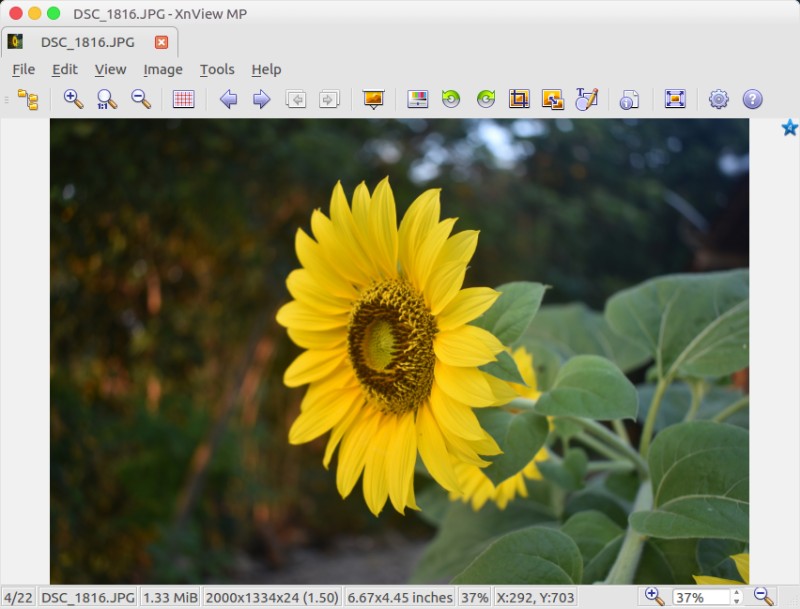 XnView is similar to Nomacs in terms of availability. The image viewer app isn’t exclusively available for Linux platform. Instead, it’s available for other platforms too including Windows and Mac. But, it tend to similar to Gwenview in terms of interface where so many visible options and menus which make its interface looks too crowded. At least, it’s easier to read the exposure triangle elements in this image viewer than Geeqie and Nomacs.