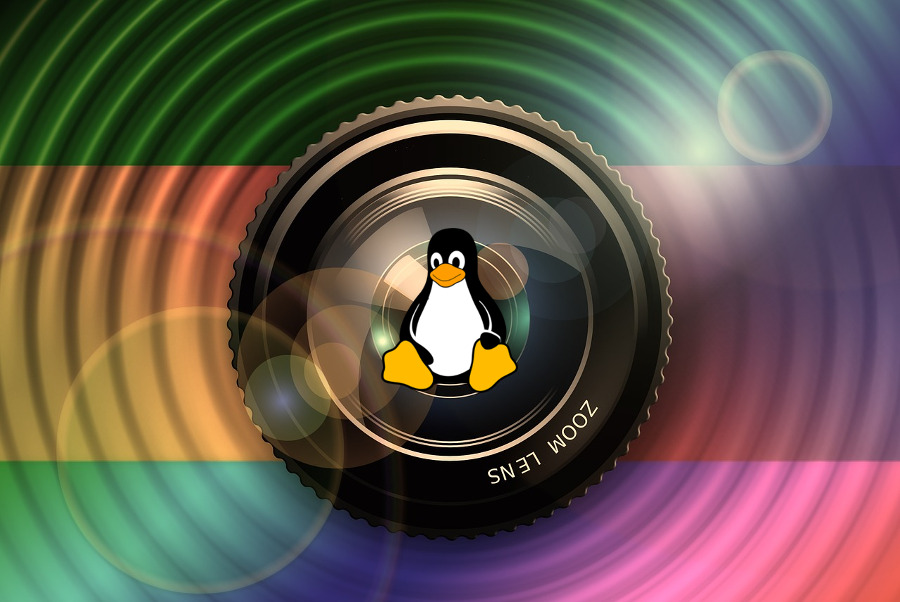 Sometimes you want to show someone what are you doing with your computer by capturing your screen. There are a wide range of cases to make someone to take a screenshot of their screen. Probably, you are a blogger who is writing a how-to article to do something. In Linux, there are a bunch of tools you can use to take a screenshot.

Basically, nearly all Linux distros already come with a screenshot app. If you use a GNOME-based distro, you can use Gnome Screenshot, while in KDE Plasma there is Ksnapshot.

Or, if you need a screenshot tool with an annotation feature you can use Shots. Or, if you are a Imgur user, you can also use Flameshot to directly upload your screenshot to Imgut. Here is the list of useful tools to take a screenshot in Linux. 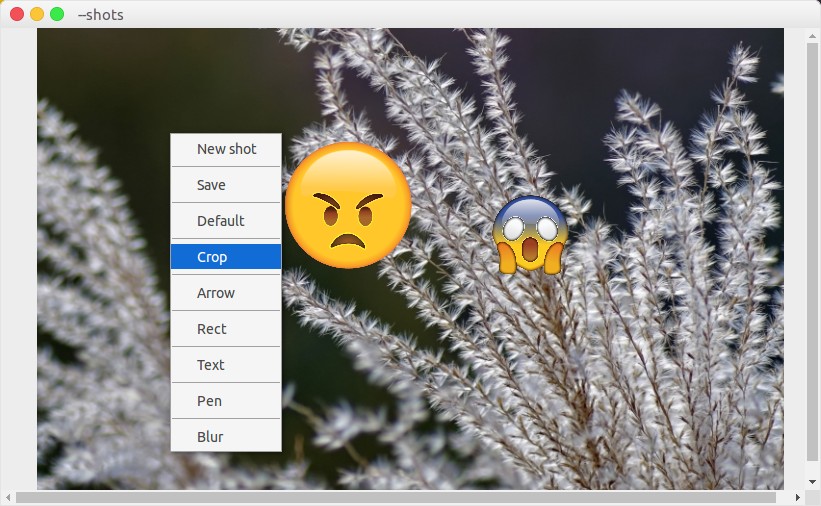 Let’s start with Shots, a very useful screenshot tool developed by a Rusian developer named Viktor Pasynok. The guy released his work as an open source software under the Non-Profit Open Software License 3.0. We are here at Bettertechtips.com love this tool so much and use it almost every day. This tool will capture your entire screen, but you can select specific area by cropping it. Before sharing the screenshot you have taken, you can also annotate it. Some elements you can add to your screenshot are:

Shots comes with a delay feature. This will be useful if you want to show a certain menu/page of a website for a how-to article. You can download the Shots package on its official site here.

Frequently uploading images to Imgur? If so, you must be love this one, Flameshot. This screenshot tool allows you to directly upload the screenshot you taken to Imgur. Same as Shots, Flameshot also allows you to add some elements on the screenshots you taken, like rectangle, arrow line, straight line, free draw and marker. This tool requires you to select the area by yourself. There are three actions you can do with the screenshots you taken. Save it to your computer, upload it to Imgur or perform an editing with the existing image editing tool on your computer.

Sadly, it’s a bit hassle to use this tool. You need to type  flameshot gui on the terminal to run the tool. Or, you can also create a desktop launcher to make it simpler. Flamehots is created by a Spanish Computer Science student named Dharkael. Flameshot is also an open source software with the source code is available on GitHub. If you use Debian-based distro, you can download the DEB package of this tool on Launchpad. 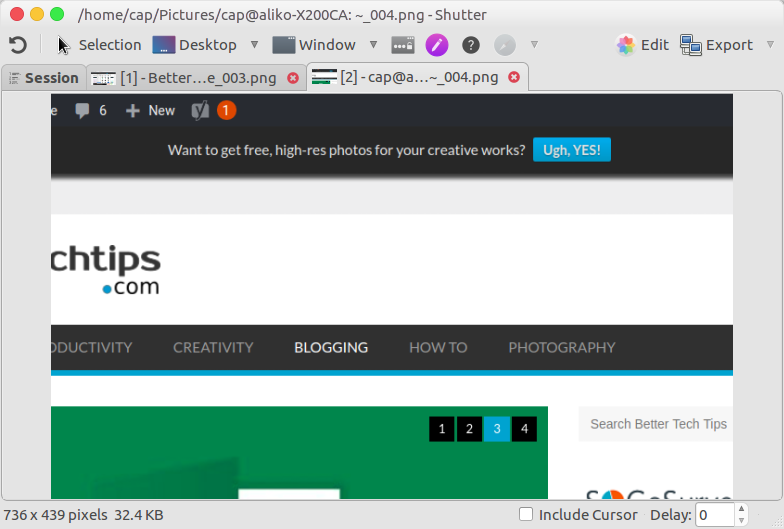 Shutter is probably the most feature-rich screenshot tool for Linux. Shutter features everything you need of a screenshot tool. You can choose whether want to capture the entire screen, certain window or selected area with this tool. Shutter also comes with a delay feature. What makes Shutter a bit different to other screenshot tools is that it has a built-in image editing tool where you can make some editing over the screenshot you taken. Other interesting feature offered by Shutter is that it allows you to upload the screenshots you taken to Dropbox, Imgur or your own server via FTP protocol. Shutter is created by a developer named Mario Kemper. It is also an open source software, licensed under the GNU General Public Licence. Shutter has been available on the software repository of the majority of Linux distros, including Ubuntu. 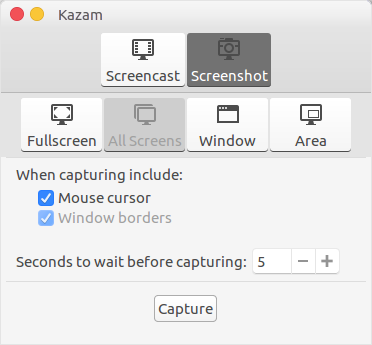 Kazam is not specifically built for taking a screenshot. You can also use it to record your screen. When it comes to screenshot tool, the way Kazam works is pretty simple. The tool doesn’t offer much features like three tools above. It only captures your screen. Not more. Kazam gives you options whether you want to take the entire screen, certain window or selected area. The tool also comes with a delay feature. Kazam is created by a Chinese programmer. It is also released as an open source software with the source code is available on GitHub. 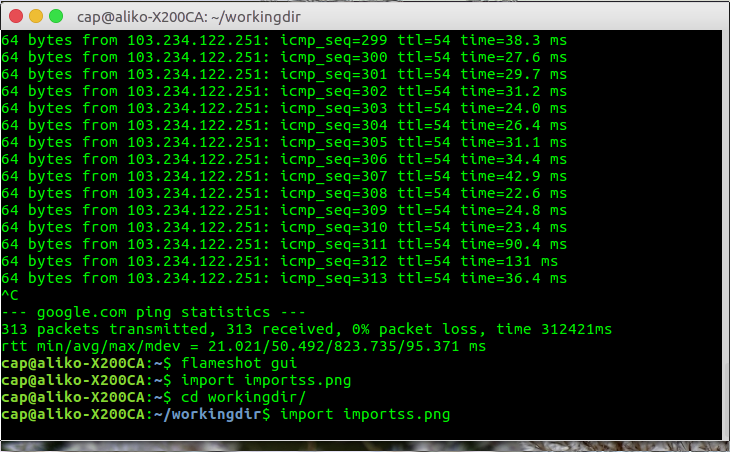 The way Import works is same as Flameshot. You also need to type a command-line to run it. The difference, this tool doesn’t have much features like Flameshot. It only takes a screenshot. Not more. You are required to select the area you want to capture. Your screenshot will be saved to the current directory where you run it. Below is the example use of Import.

Import itself is a part of ImageMagick. So, to use this tool you need to install ImageMagick. 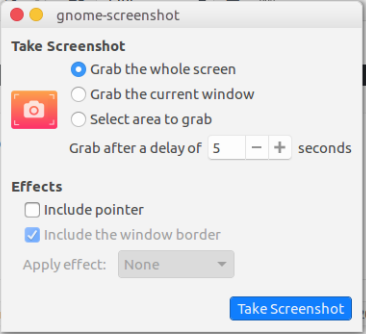 Like the name suggests, Gnome Screenshot is the default screenshot tool of GNOME-based Linux distros. This tool is extremely simple and has no much feature. It only focuses on one job, capturing your screen. This tool also gives options whether you want to capture the entire screen, certain window or selected area. Gnome Screenshot also allows you to delay the taking screenshot process for seconds. By default, this tool saves the screenshot file under the Pictures folder of your account. 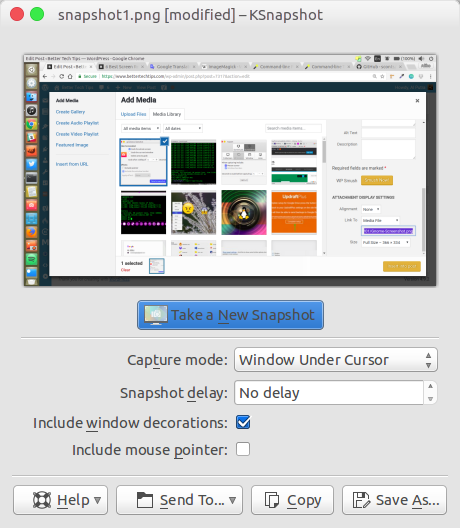 Why not? You can also use GIMP to take a screenshot of your screen, whether the entire screen, certain window or selected area. When taking a screenshot with GIMP you can also delay the capturing process for seconds to give you a chance selecting the area you want to capture. To take a screenshot using GIMP, you can click the File menu and hover your mouser over the Create option. You will see an option called Screenshot (see the screenshot above). Your screenshot will be sent to a new canvas on GIMP.