8 of The Best Task Managers for Linux

HomeLinux8 of The Best Task Managers for Linux

8 of The Best Task Managers for Linux 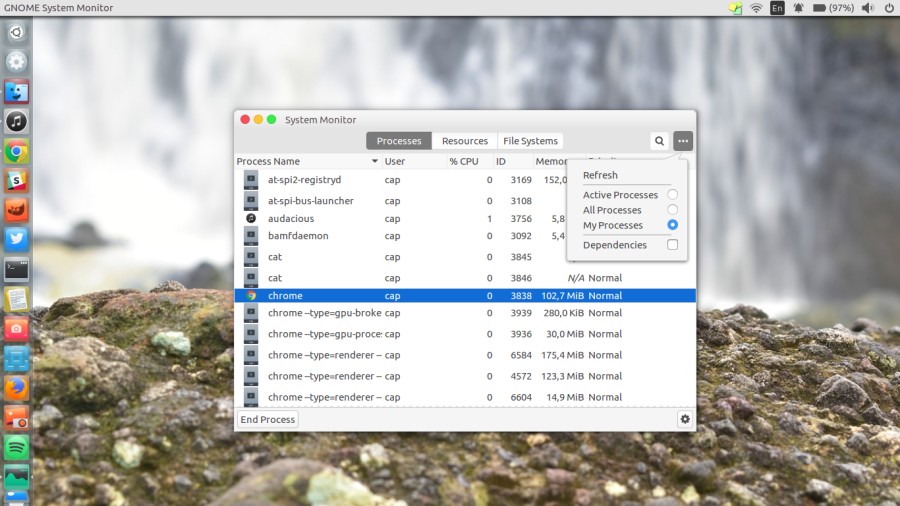 When it comes to operating system, task manager is a tool to check the currently running processes. Nearly all operating systems, desktop based in particular, already come with this sort of tool. Linux is not the exception. Each Linux distribution comes with different task manager, depending on the desktop environment it uses.

Each desktop environment offers different task manager. GNOME for instance, it has a task manager called Gnome Task Manager. In general, a task manager displays such statistics as CPU usage and memory usage. In addition, it also allows you to perform certain actions. 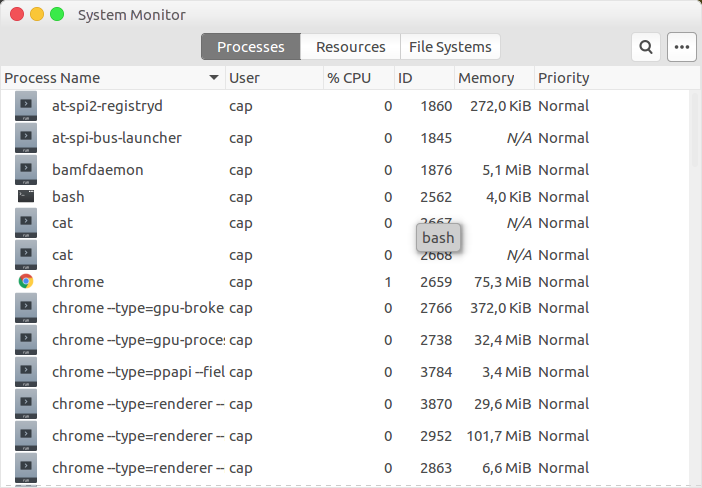 As the name suggests, Gnome System Monitor is the task manager for the GNOME desktop environment. The tool comes with a very simple interface. There are six columns you can see on this tool: process name, user, process ID, CPU usage, memory usage and priority. An End Process button will appear when you click on a certain process. You can filter the output to display only processes run by you. The gear button at the bottom right corner will give more detailed information regarding each process. 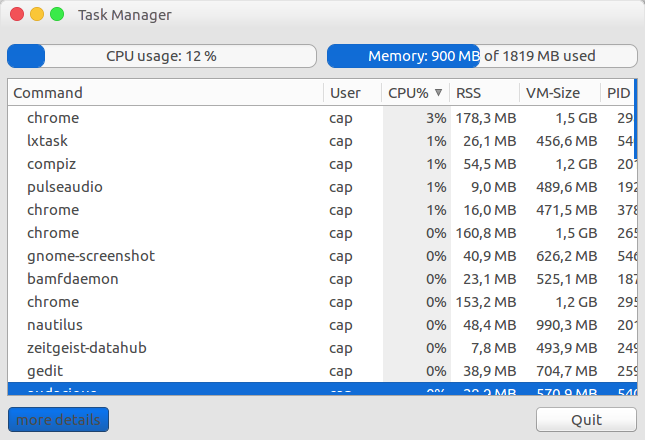 LXTask is the default task manager for LDXE. The task manager also comes with a simple interface. You can also check the CPU percentage usage of each running process as well as the memory consumption. This tool also displays the overall memory usage as well as the CPU usage at the upper side. LXTask offers more actions over each process. To see what you can do to each process, you can right click on a certain process. LXTask also gives you chance to filter the output. 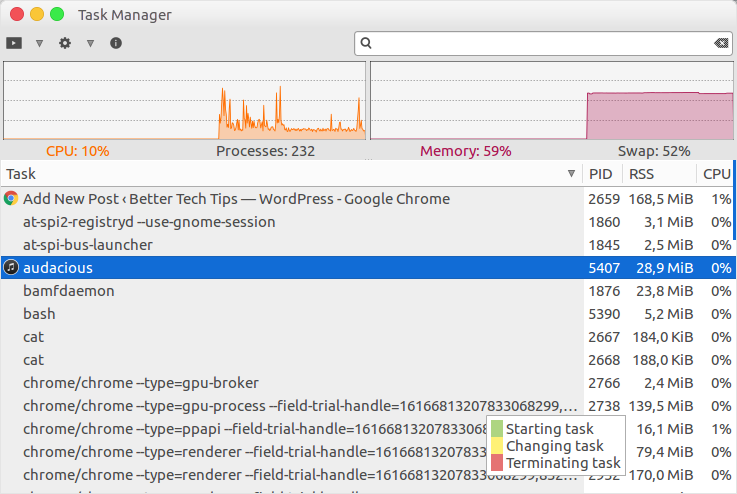 XFCE Task Manager is the default task manager for the XFCE desktop environment. This tool is a bit similar to LXTask. At the upper side of its interface, you can also see the overall usage of the CPU on your system as well as the memory usage. It also offers more actions, which you can see by right clicking on each process. You can choose whether to kill the process, terminate, stop or set the priority. XFCE Task Manager only displays processes run by you. I doesn’t display the processes run by root. 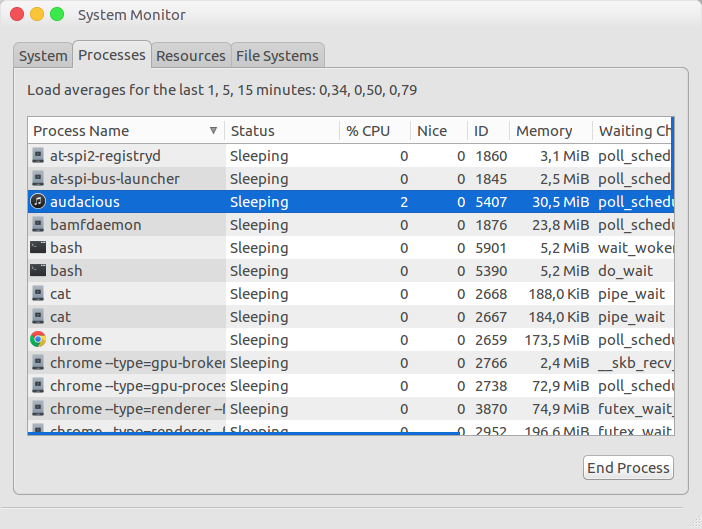 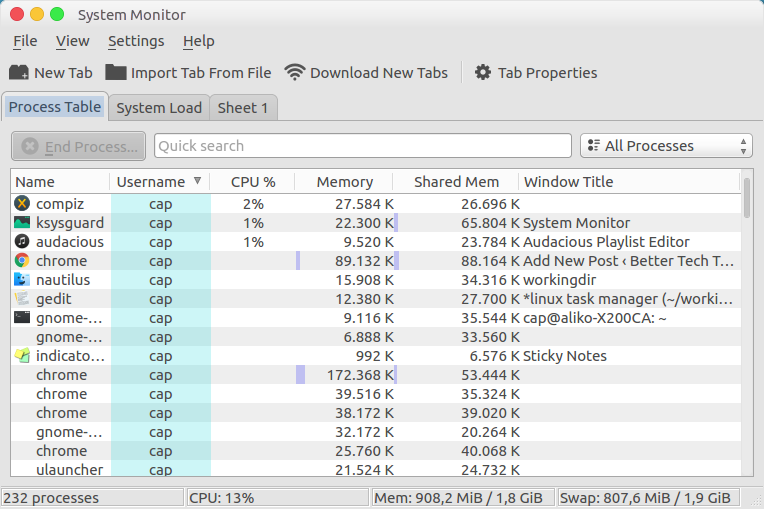 KSysGuard is the default task manager for the KDE Plasma desktop environment. Same as four first tools above, KSysGuard also display all of the running processes, complete with the detailed information related to each process like memory and CPU consumption. In addition, the tool also displays the overall resource usage on the system which is displayed at the bottom side. KSysGuard is customizable. By default, the tool provides two tabs which display the running processes and system load, respectively. If you want, you can also add new tabs to display more detailed statistics regarding your system such as clock frequency, user load and so on.

In addition to GUI based task managers like mentioned above, you can also use a CLI-based task managers. top is the common CLI-based task manager used to by Linux system administrator. top basically also displays statistics like CPU and memory consumption, but not displayed in a clickable interface like GUI-based tools above. To kill a process, you can type the “K” button on your keyboard followed by the ID of the process you want to kill.

htop is another popular CLI-based task manager on Linux. Unlike top, htop displays the processes in a three style so you can see the process hierarchy on your system. This tool also displays statistics like memory and CPU consumption. At the upper side of htop interface, you can also check the overall CPU and memory usage which are displayed in the colorful bars. At the bottom of the htop interface you can see a group of shortcuts to perform certain action.

Last but not least. glances is also a great tool to check the running processes on Linux, server in particular. Not only displays the running processes, glances also displays other information like network statistics and input/output activities. glances is much like Mate System Monitor. The difference, this tool doesn’t display the statistics in a graphical interface.