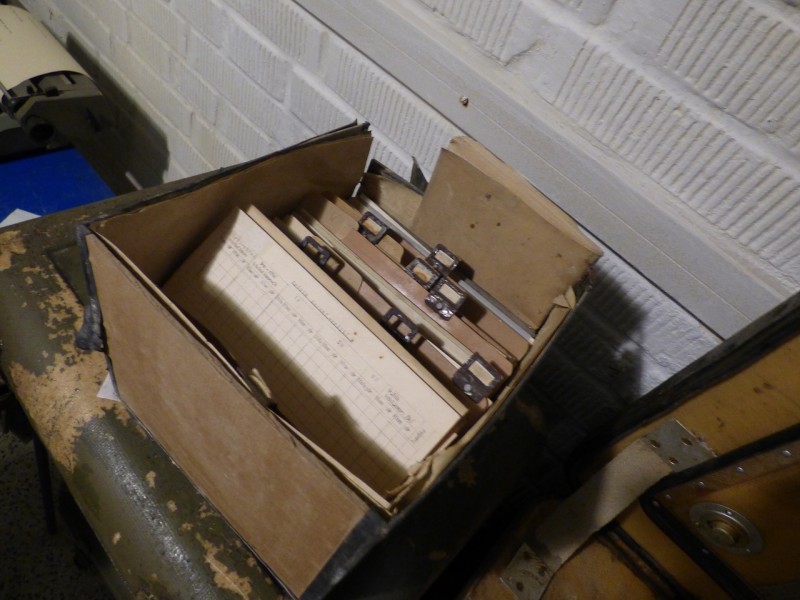 File manager is a mandatory tool in every operating system. Without this tool you can’t do anything with the files you have in our computer. You might not realize about this but, that’s the fact. Without file manager you can’t do a lot of basic administrative tasks like moving files, deleting files, creating a new folders and  so on.

Chances are Windows and Mac users only use (or even know) a single file manager their entire lives but, the different story goes to open source based operating system users, Linux in particular.

In Linux you can try different file managers that best suited to your needs or taste. Generally, every open source file manager has a similar features and capabilities. However, there are some details that make them look different between one and another. It can be user interface, the number of available options when you perform a right click etc.

Since they are open source, you can do anything with it. Whether as a file manager for your own Linux distribution, for instance. Or anything. By the way, here is the list of the best GUI-based open source managers which you can try. 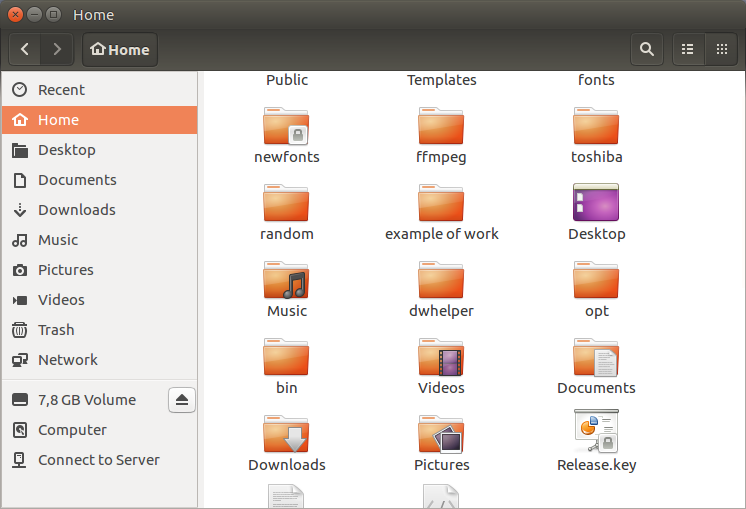 Nautilus is a part of GNOME. This is probably the most well-known open source file manager due to the popularity of Ubuntu. Ubuntu has been using Nautilus as its default file manager since the initial release until today. From the time when it was still use GNOME to Unity. Chances are the distro will be keep using Nautilus for the next 18.04 release which is planned to return to GNOME.

Nautilus is pretty simple and easy to use. Comes with a sidebar for easier navigation. The file manager supports multiple tabs to enable you handling more tasks to get more things to quicker. It also has a Search feature to make it easy finding a certain file in case you forget where you store it. 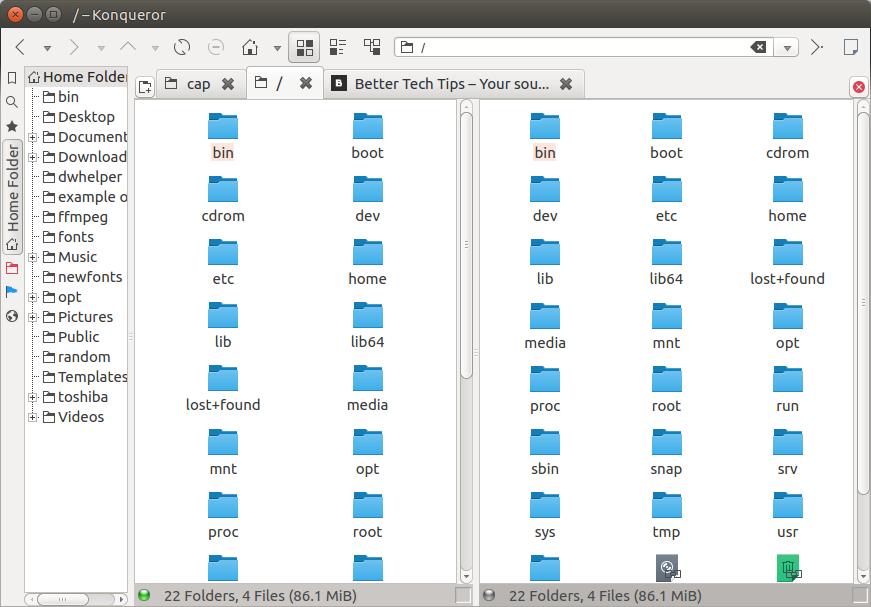 If you are a sort of person who love an app with a complex features then Konqueror would be the best option for your. Konqueror is probably the most complex file manager in the world (seriously). It not only plays a role as file manager but also doubles as a web browser. Just type a certain web address (bettertechtips.com, for instance) in the available search bar and you will be directed to the web page you want.

You will see so many menus in Konqueror. The sidebar of this file manager is a bit similar to old file manager in Windows XP which shows the folder hierarchy. Konqueror also supports multiple tabs. Interestingly, each tab can be divided into some panels which is great if you are working on many files to rearrange them. Konqueror itself is a part of KDE but it also runs very well in other desktop environments. To get the most out of Konqueror you can also install other Kmail, a desktop email client developed by KDE. 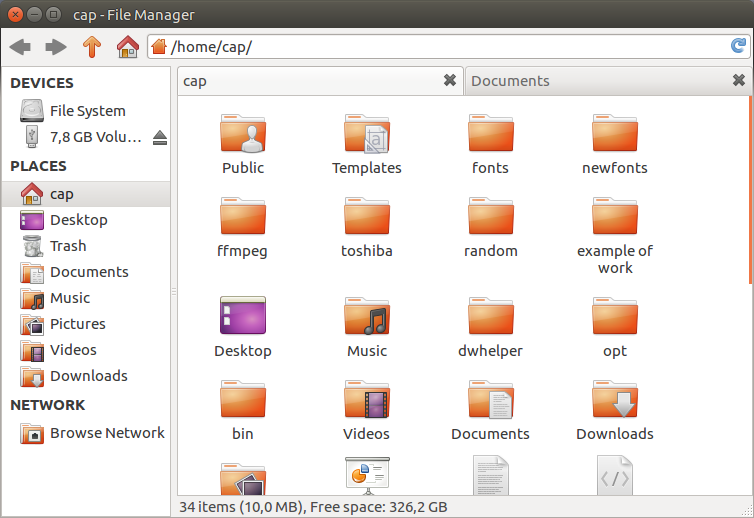 Thunar is a lightweight file manager that is designed specifically to works on lighter desktop environments like Xfce, LXDE and lots more. Specifically, this file manager has been designed for Xfce. Thunar is pretty similar to Nautilus in many ways. Including the interface. However, Thunar has fewer features than Nautilus. This can be seen when you perform a right click on a certain file in Thunar. You will see fewer options to choose. 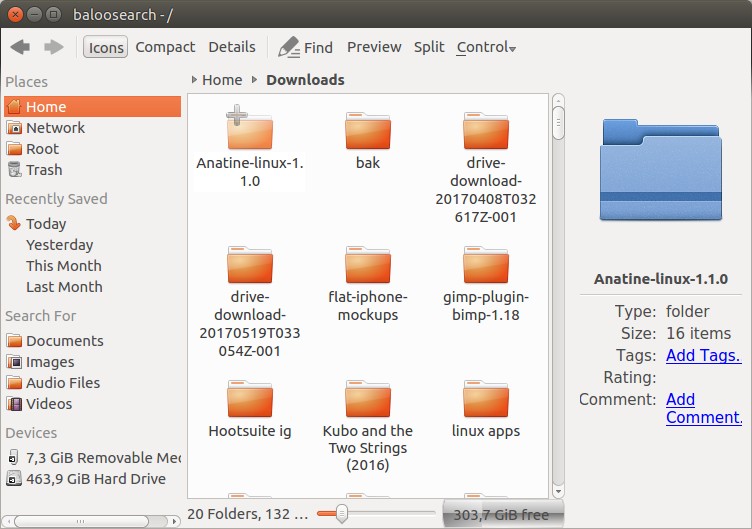 Doplhin is another file manager developed by KDE. So, it’s unsurprising that its interface is quite similar to Konqueror. However, Dolphin is not Konqueor. You can’t use this file manager to access a web page like you can do with Konqueror.

Dolphin is also feature-rich. There are many menus you can find in this file manager. Sidebar is also enabled by default for easier navigation. Just like other file managers mentioned earlier above, Dolphin also supports multiple tabs to enable you handling more tasks. Each tab can be splitted into two panels. 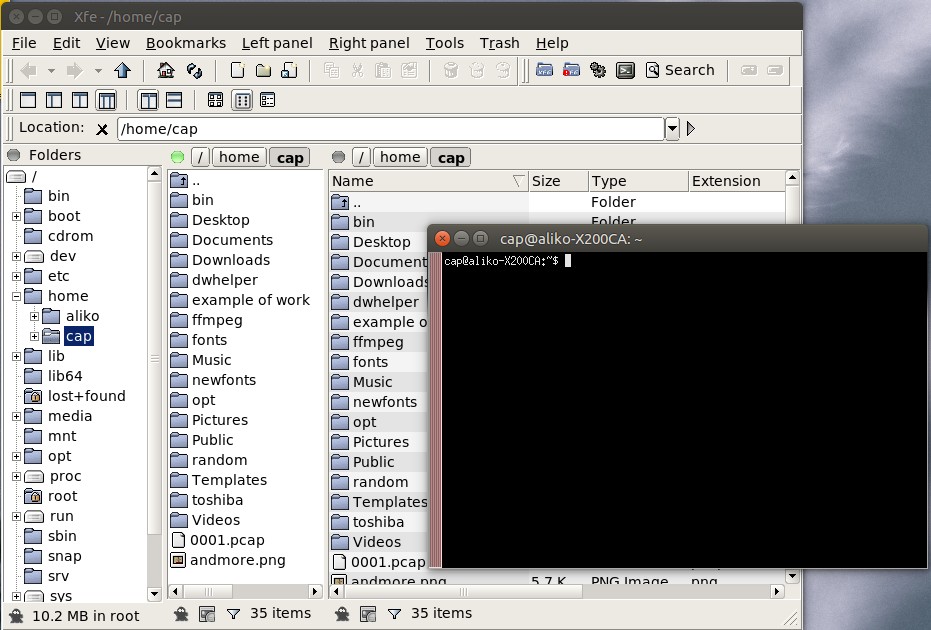 XFE is an open source file manager with a very simple interface. The file manager was built based on the popular, but discontinued, X Win Commander. This file manager is an individual project by Roland Baudin, a french Linux enthusiast. XFE less suitable for beautiful interface lovers but, it functionally good.

You can configure how XFE should display the panel. Whether a single panel, two panels with a hierarchy sidebar or three panels. You can also set the orientation of the panel, horizontal or vertical. XFE has a built-in feature to enable you run terminal directly from the file manager. Unfortunately, XFE doesn’t support multiple tabs. You will also unable to customize the look of this file manager since it has no option to use the desktop color scheme, icons or decorations. 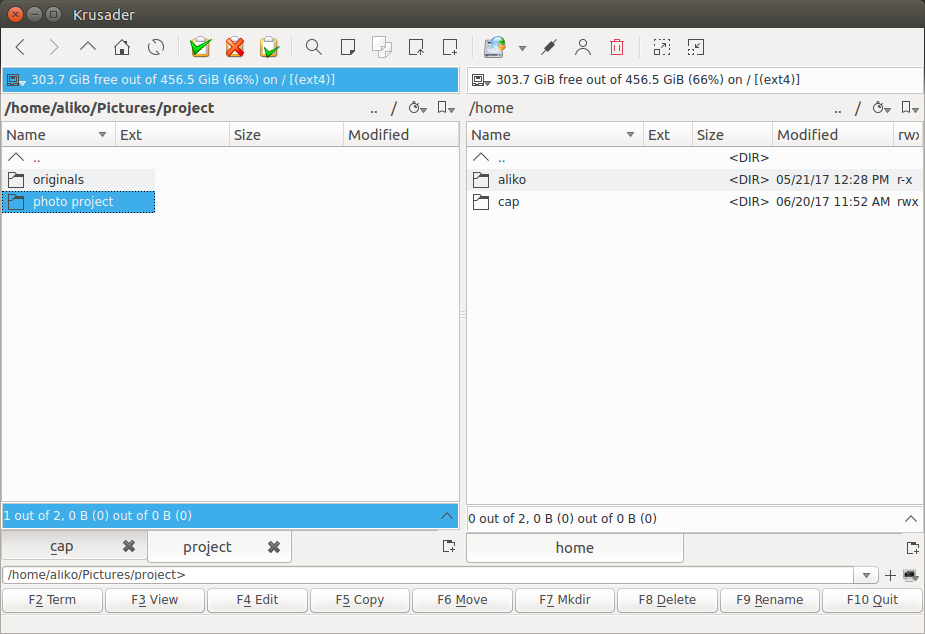 Krusader is another file manager developed by the folks at KDE. This is the “GUI version” of Midnight Commander, a well-known command line based file manager with a twin panel. Even though it was naturally developed for KDE Plasma, Krusader also runs very well on other desktop environments in Linux like GNOME, Unity, Mate and so on.

The interface of Krusader is quite similar to Midnight Commander aka MC, complete with shortcuts information that is located at the bottom of the screen. However, (for GUI fans) Krusader is much better than MC. The primary user interface of Krusader is two text-mode panels — left and right — which each display the contents of a directory. The top of each panel contains the name of the current directory for that panel. One of interesting parts about Krusader is that it comes with a built-in Disk Usage analyzer. This file manager also supports multiple tabs (the tab selector is located at the bottom instead of top) 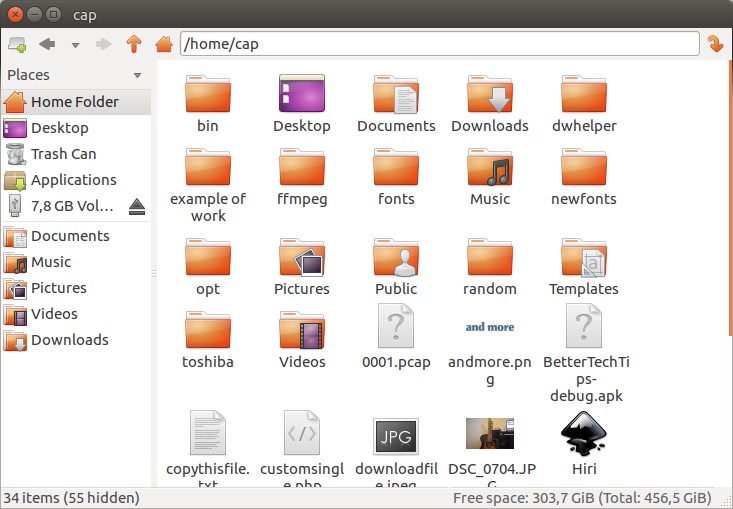 Don’t be surprised if you find the interface of PCManFM is quite similar to Nautilus or Thunar because this file manager is intended to replace both of them. PCManFM has one thing in common with XFE. It’s developed by individual instead of community. PCManFM, which has a long name of PCMan File Manager — was developed by Taiwanese, Hong Jen Yee. PCManFM is the default file manager in LXDE, which is also developed by the same author in conjunction with other developers.

What makes PCManFM different to Nautilus and Thunar is that PCManFM supports dual panel mode. Just like other open source file managers on this list (except XFE), PCmanFM also supports multiple tabs. 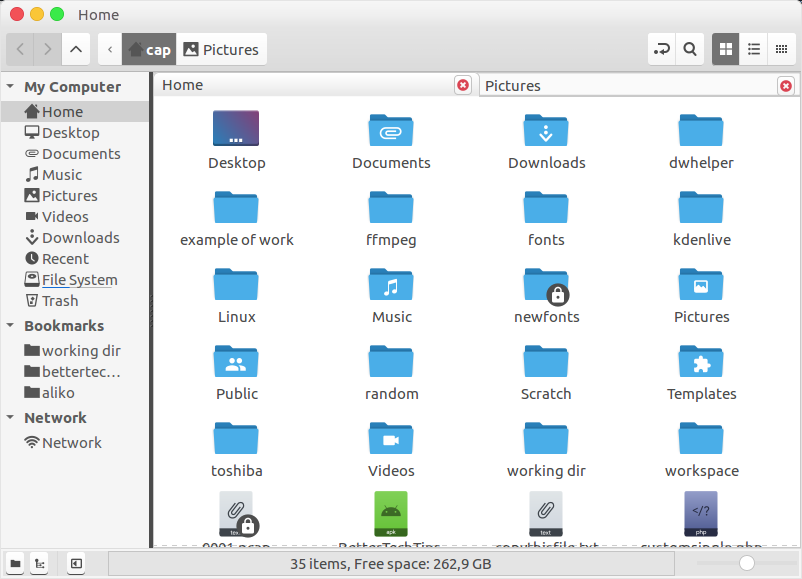 Cinnamon desktop environment users might be wondering “where is Nemo?”. Sorry to have missed it :).

Nemo is the default file manager of Cinnamon. The general features of this file manager are not far different to Nautilus since Nemo is basically a fork of it. You will also see standard features and capabilities of modern file manager like multi-tab, the capability to display files by date modified and name, bookmark for quicker file access and so on. While you can install this file manager to see its source code, the source code of Nemo is also available on GitHub. 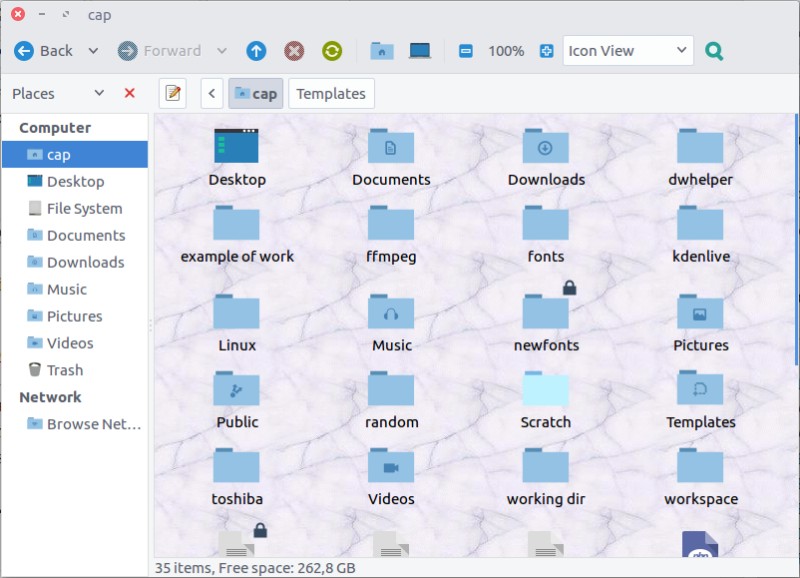 Same question is probably also thrown by MATE users. Where is Caja?. Don’t worry guys, here it is :).

Well, Caja is another file manager fork of Nautilus. So, you won’t see radical features of a file manager. If you have been a long user of Nautilus then you will find something familiar in Caja. When you click the Edit menu, you will find a “Backgrounds and Emblems” which you can use to apply a background on your file manager. This feature is basically not a new thing since it used to available on Nautilus, too.

Overall, the features of Cava are quire similar to Nautilus. The source code of this file manager is also available on GitHub.