Enjoy Your SoundCloud Playlists With This Linux Desktop App

HomeLinuxEnjoy Your SoundCloud Playlists With This Linux Desktop App

Enjoy Your SoundCloud Playlists With This Linux Desktop App 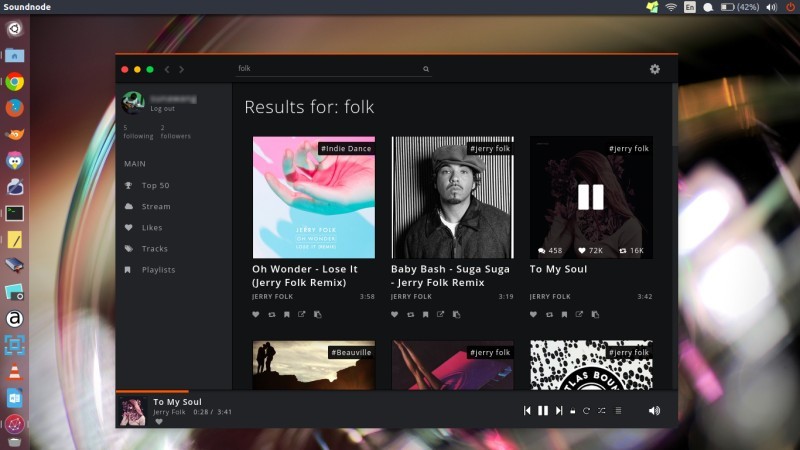 The YouTube of audios. SoundCloud is one of the best sources to discover new audio tracks on the internet. If you are an indie music lover SoundCloud is your home.

If you like me, I feel more comfortable to enjoy music from desktop-based app rather than web browser. This is the huge minor of SoundCloud. The service has no official app for desktop. Yes, it once developed the desktop app to bring music to desktop but has been stopped even long before people hear it.

SoundCloud may excuses to focus on mobile but still, ignoring desktop is a big mistake as there are many users expect it. So, don’t blame them if they finally switch to Spotify.

Don’t be discouraged if you have deeply been falling in love to Spotify. There is a cool third party desktop-based app — Soundnode — to enable you take your SoundCloud playlist to desktop. Soundnode is an open source, cross-platform app. Major desktop platforms, including Linux is supported by the app.

Soundnode is a Node.js and Angular-based desktop app that looks great and feels like a fully-native desktop app, complete with keyboard shortcuts and full Soundcloud features. It’s got everything you’d expect from an official Soundcloud-made app.

As I mentioned, Soundnode is available for Linux desktop. The app comes with a cool, black dominant interface. At the first launch you will be asked to login with your SoundCloud account. Or you can also create a new account if you haven’t had one. Here’s a glance look of Soundnode.

AS you can see. Nearly everything you can see on SoundCloud native web app is available on Soundnode. There is a search bar at the top side to explore the audio tracks while at the left side you will see the feed (Stream) from the accounts you follow, the tracks you liked and playlists you created.

In this article I will demonstrate how to install Soundnode in Ubuntu. If you use other debian-based distros you should also follow the same steps. Other distros can download the zip file of Soundnode and follow the included instructions.

Open your terminal and type the following command.

Now you can launch Soundnode from the Unity Dash of Ubuntu and start enjoying your favorite tracks.

Factors to Consider Before Hiring a Computer Repair Expert