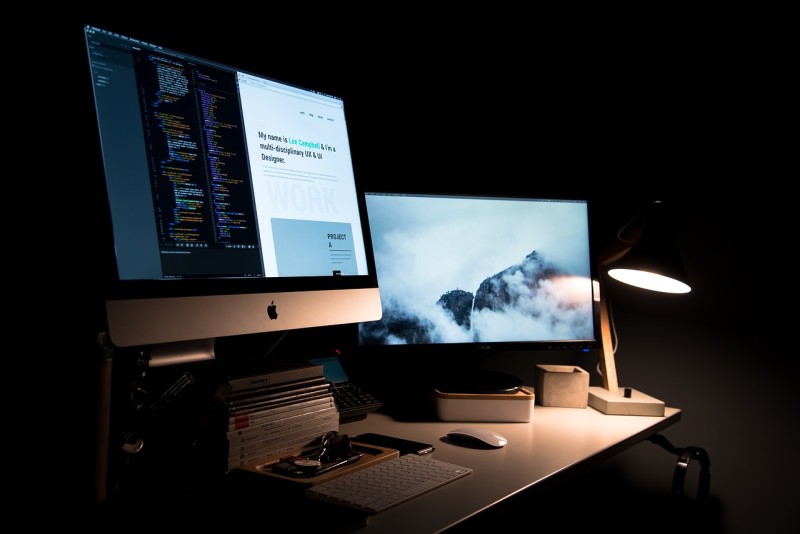 Compared to HTML, Markdown still relatively new but, the number of use of this text format is getting increased. Same as HTML, Markdown is also projected for the use of web but, it comes with simpler syntax and fewer formatting options.

Just like HTML and other text formats, you can also take advantage of an editor built specifically for editing Markdown documents to ease your job. Typically, a Markdown editor has a clean interface to help you keep focused on what you are writing.

Mac users have more options of Markdown editor than other platforms. This article is going to show you some of them. As I said, most Markdown editors commonly have a clean and simpler interface. They usually also offer a distraction-free mode to help you be even more focused. They also don’t require you to memorize every single syntax of Markdown to format your documents.

Here is the list of the best Markdown editors for Mac. 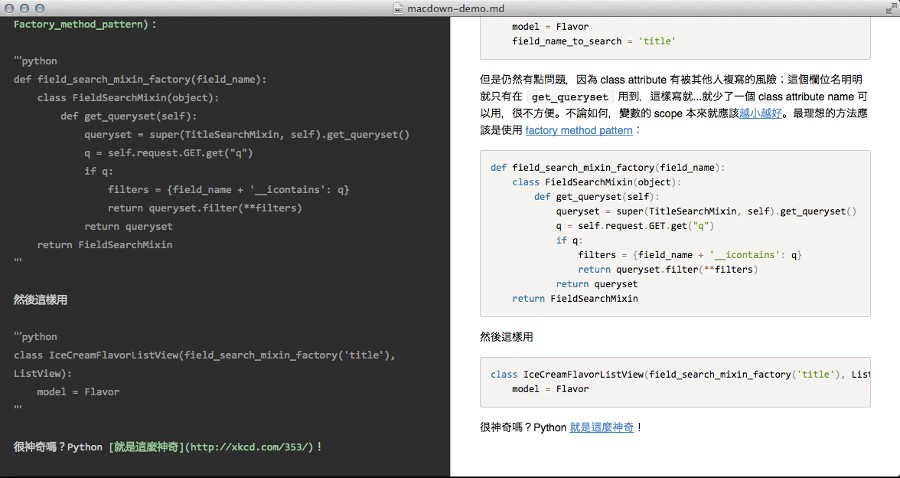 It’s rare enough to see an open source app built specifically for Mac but, rare doesn’t mean nothing. MacDown is one of the examples of that rare open source app. This Markdown editor is released under one of popular open source licenses, MIT License. It comes with a number of useful features to make your job of writing Markdown become much easier, including auto-completion, syntax highlighting, rendering tools and lots more. Best of all, this is available for free. 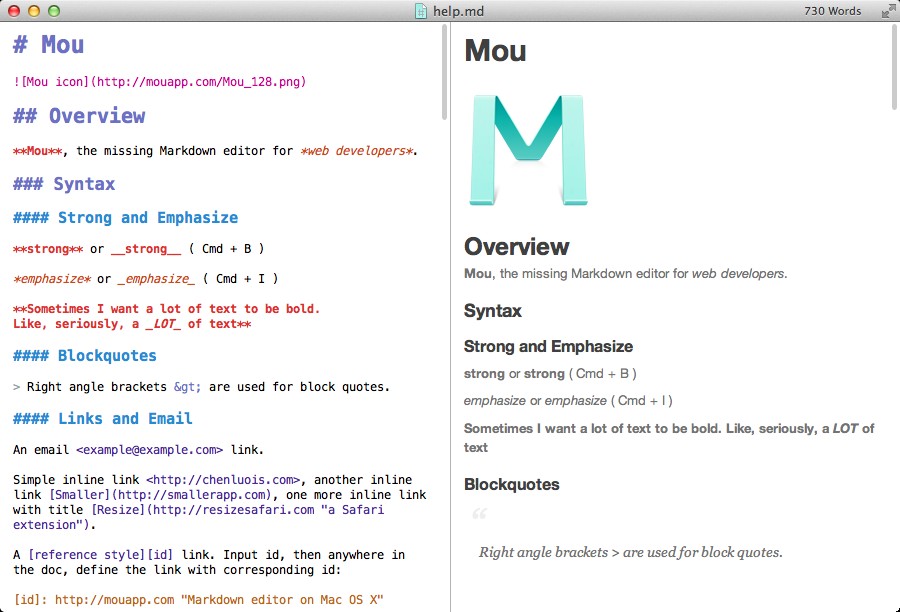 If you are a user of Tumblr or Scriptogr.am then there is no reason to not try this Markdown editor. Mou comes with a capability to directly post Markdown documents you have written to both platforms. You can also export your works into HTML and PDF. The downside of Mou is that this editor currently hasn’t supported for macOS Sierra. 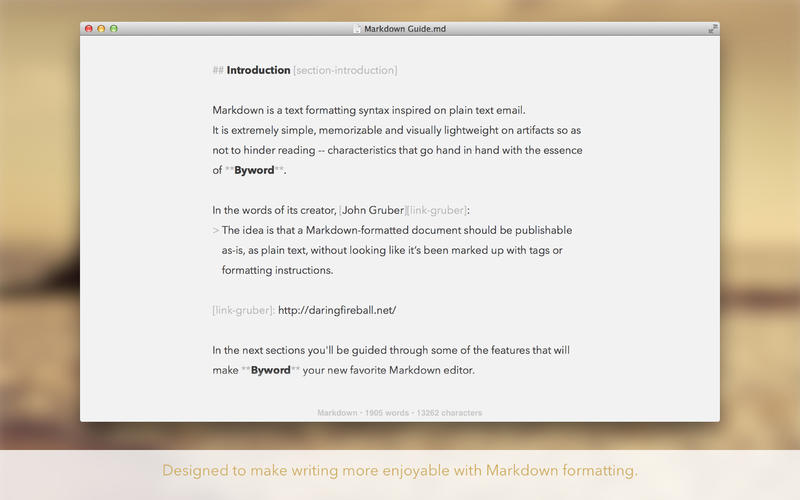 For a or two reasons there are some bloggers who feel more comfortable writing article in third party editor instead of default editor offered by the blogging platform they use. If you are a sorts of that blogger, Byword would be your best companion. Same as Mou, Byword also has the capability to directly post your Markdown documents into several blogger platforms. Blogging platforms that are supported by Byword include WordPress, Blogger, Medium and Tumblr.

You can also export your Markdown documents into several other formats like Word, PDF to RFT. But, before being able to use this editor you need to spend your dollars since Byword is a fully paid app that is only available on App Store. 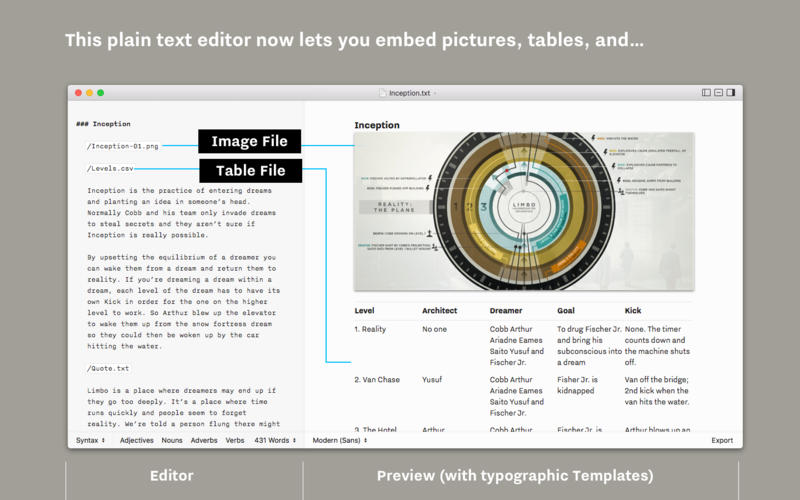 Same as Byword, iA Writer is also a fully paid app that is only available in the App Store. This Markdown editor comes with an Apple style by adopting the minimalist concept. It uses a light gray background, monospaced font and blue cursor. Focuse mode is available.

As you can see from the screenshot above, iA Writer allows you to insert images to your Markdown documents. Additionally, it also supports tables and content blocks. Other features you will probably love to are live preview and live sync. 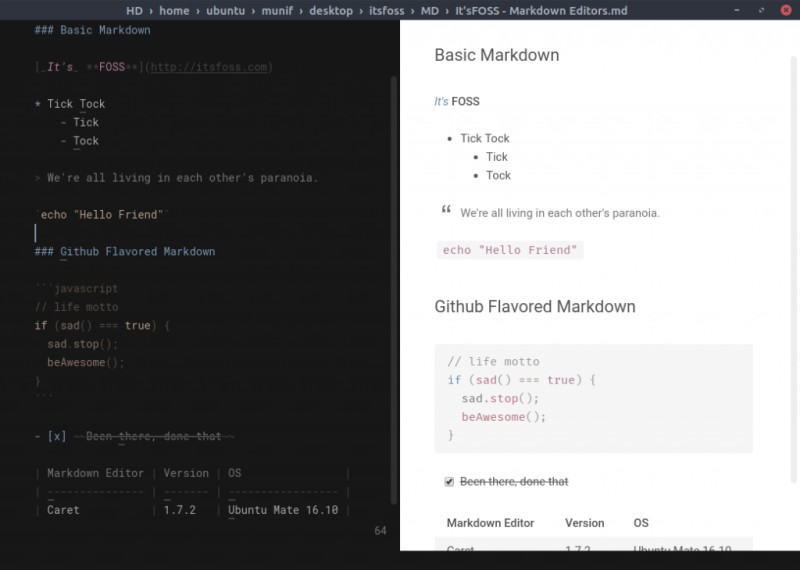 Caret is a great Markdown editor app which comes with a sleek design. If you need a distraction-free Markdown editor then Caret is one of the apps you can consider. It’s just, this app is cost too much than other similar apps mentioned earlier above. You need to spend $25 to get the copy of this app. But, you can probe it first since Caret provides a demo version.

Caret is not built specifically for Mac. Windows and Linux users can also use it to write Markdown. Caret is a GitHub flavored Markdown editor with lots of useful features including auto-completion, syntax assistance and so on. 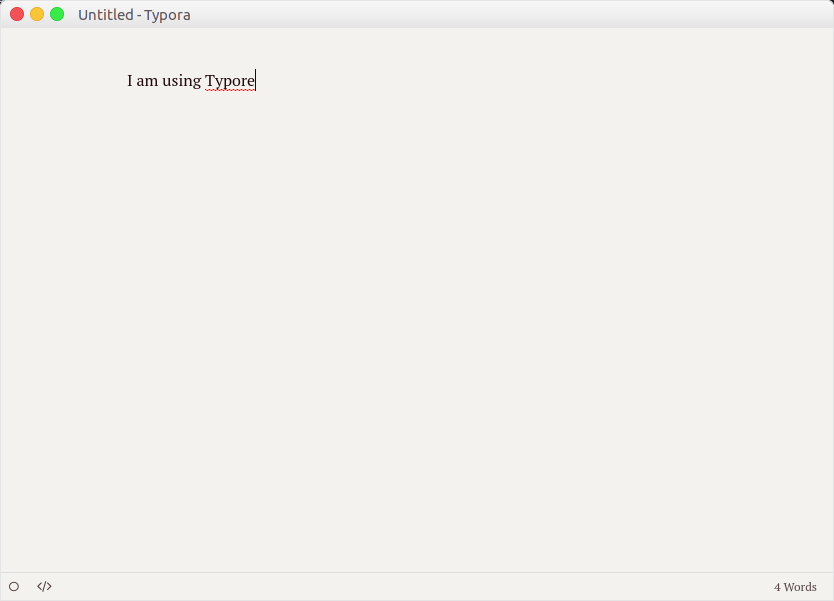 Same as Caret, Typora is also a multi-platform app. Apart from Mac, this app is also available for Windows and Mac. Typora is a truly distraction-free Markdown editor. By default, you will see nothing on your working window but a cursor and a gray background. You can start writing your document without any distraction at all. But, if you want to show the side panel, you can do it.

If you don’t like the default theme of Typora there are four other themes which you can choose from, including GitHub-like one. The focus mode is also available as well as full screen mode to enable you remove all the distractions. Currently, Typora is still in beta phase so you can use this app for free. 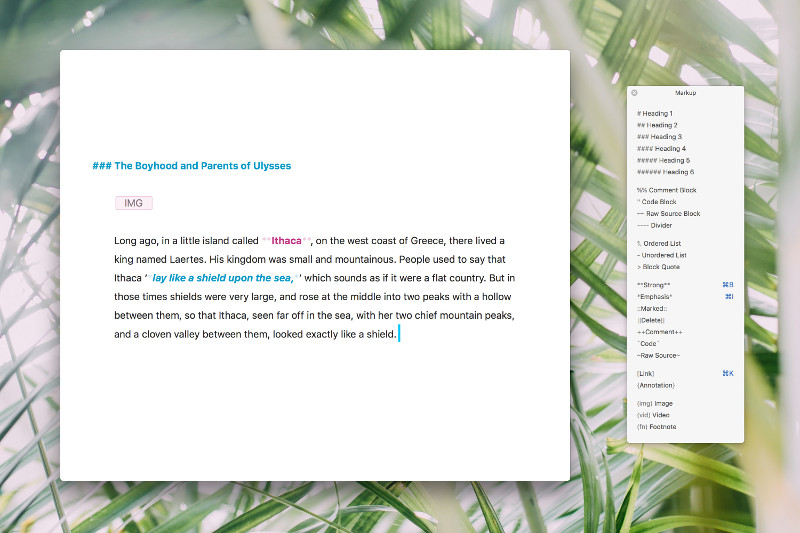 Writers who is looking for a distraction-free editor can give a wink to Ulysses. The 2016 Apple Design Award winner app is designed specifically for writers. Chances are, famous writers like JK Rowling and Paulo Coelho also use this app. We never know, right?. This app comes with a number of features to allow you keep away from distractions. The distraction-free features include typewriter mode, dark themes, and full-screen editing.

Since this app is designed specifically for writers you will also get such writing-related features as writing goals, notes and attachments, keywords, word count and so on. If you wish it you can also turn your Markdown documents into other formats like HTML, PDF, Docx, and ePub. Furthermore, Ulysses also enables you to directly publish your documents to WordPress and Medium. You need to grope your pocket deeper for Ulysses since it available for almost $45. 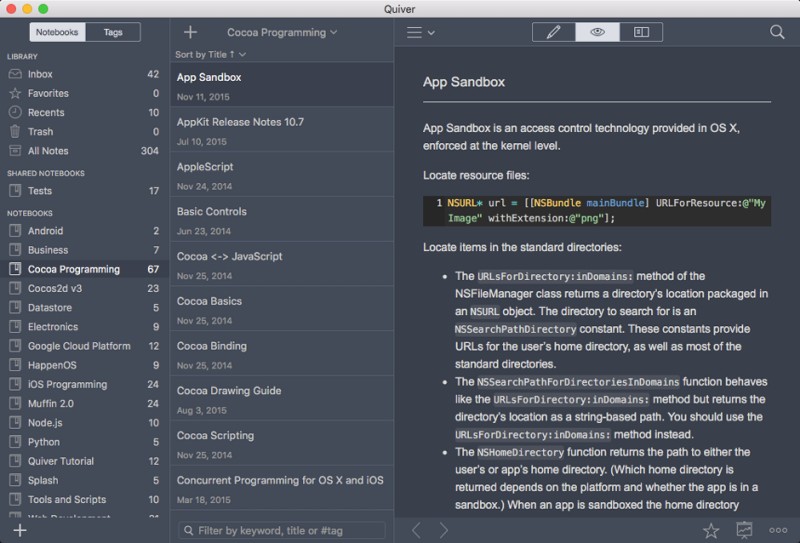 Quiver isn’t just a Markdown editor. Outside of its functions to help you creating Markdown documents, the app also can act as a note management tool since your notes are well-organized with this tool. Unlike Ulysses which was built for writers, Quiver was built specifically for developers. You can combine text, code, Markdown and LaTeX in a single note. Pretty cool for developers who spend most of their time working with those kind of texts.

Quiver is also a great collaboration tool for developers since it allows you to store your projects online on Dropbox, Google Drive and iCloud. You can even create shared notebook to let everyone on your team to both view and edit notes in the notebook. Quiver is a paid app but you can probe this app first by installing its trial version. 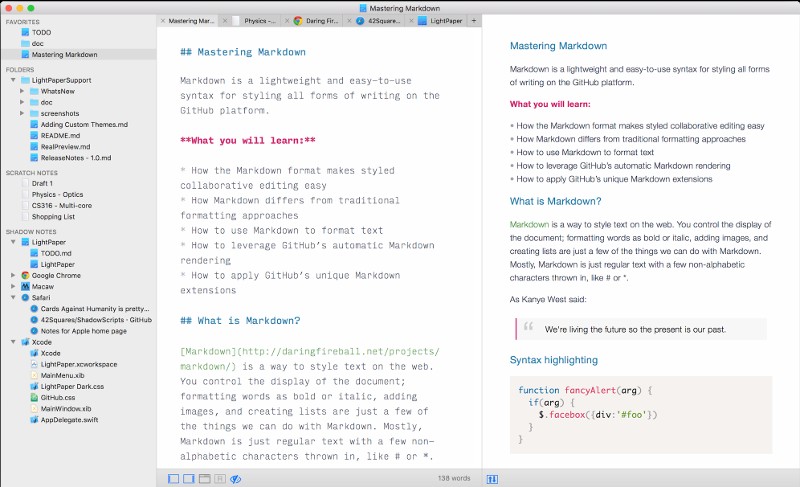 LightPaper is similar to Quiver in terms of organizing documents. It features a sidebar which you can use to manage your documents like creating a new one, delete unused documents, create a folder to gather documents with the same topic and so on.

But, LightPaper is more similar to Ulysses in terms of functionality. This editor was built specifically for writers but it doesn’t mean that developers can’t use editor. The tabbed interface of this editor allows you to handle multiple documents at the same time. Though its interface looks a bit crowded but a distraction-free mode is available if you want to focus on a specific paragraph while writing. LightPaper is also fully paid app. A 14-day free trial is available if you want to give this app a try first. 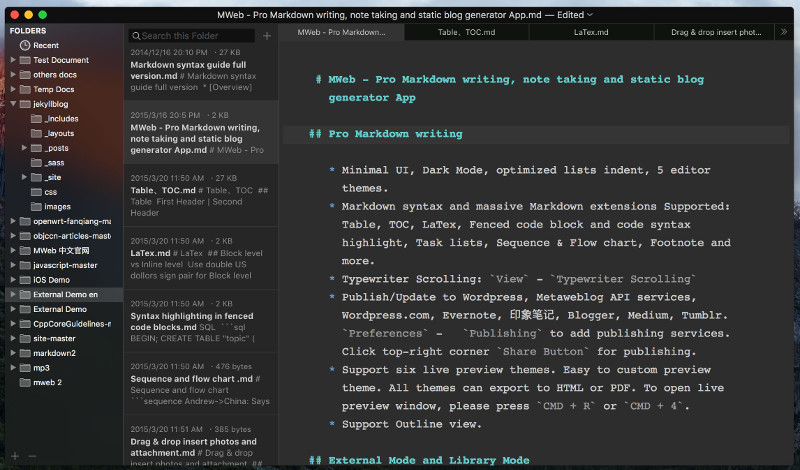 MWeb is similar to LightPaper in many ways. It features a sidebar to allow access document libraries. It also comes with a tabbed interface that allows you to handle multiple documents at the same time. MWeb is a great companion for creative writers, bloggers in particular, since it also allows you to instantly publish your documents to Medium, WordPress, Tumblr and Blogger. Additionally, you can also export your documents into other formats like PDF, HTML, Docx, RTF and lots more.

The External Mode of MWeb allows you edit Markdown documents from anywhere on your Mac. One of the interesting features about MWeb is that you can upload local images to image hosting services like imgur and Google Photos. 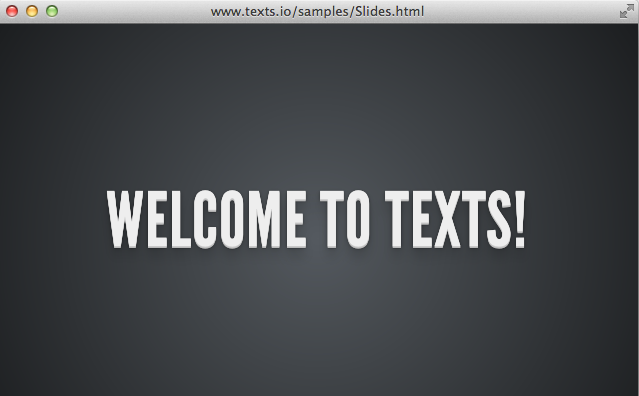 Texts (yes, Texts) is another option of Markdown editor which you can choose for creating Markdown documents. This markdown editor was built specifically for academics. It focuses on producing well-structured content that can contain formulas, footnotes, bibliography and citations, tables and links. Mac is not the only platform that is supported by Texts. Windows users can also take advantage of this app to create Markdown documents.

You can download and use Texts for free for 30 days. If you want to continue using Texts you need to buy its licence which cost $19 per user. 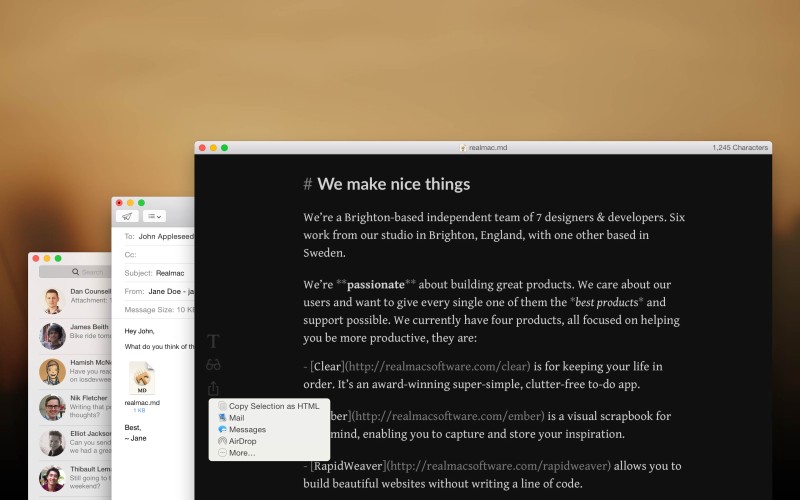 Focused is another Markdown editor app that is tend to ideal for writers. This Markdown editor comes with a number of features that not all of other apps on this list have. Including Zen Mode which heightens your focus with a choice of eight carefully selected soundtracks. Perfect to help you relax and create great content, no matter what your deadline may be. Its minimalist design helps you even be more focused, just like its name.