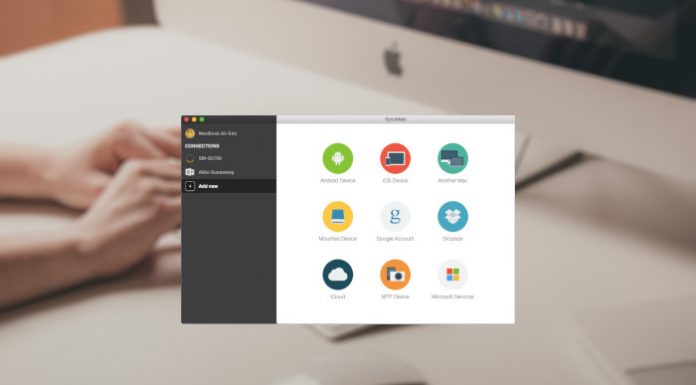 In today’s age, it’s almost impossible to live with only a single device. You need a laptop to work, smartphone to communicate with friends and family. Often times, we need to use the files on the laptop storage on your smartphone. If you love an old-school style, you can simply connect your laptop and smartphone using a USB cable to transfer the files you need. But, we are living in the internet era with synchronization technology is around. You can use this technology to sync your laptop with your smartphone. This way, you don’t need to manually transfer files from laptop to smartphone using a cable every time you need them. Most operating systems, including macOS, have no such a default feature.

SyncMate is a synchronization app developed exclusively for Mac. In addition to syncing your Mac with your smartphone (Android and iPhone), you can also use SyncMate to sync Mac with cloud storage services like Dropbox, Google Drive, and OneDrive. You might think, don’t Dropbox, Google Drive, and OneDrive have their own client app to sync your Mac with your account? True. But, imagine if you have an account on all of those cloud storage services. How many apps you need to install? Not to mention if you want to sync an MTP device or mounted device.

Things you can do with SyncMate

Sync your Mac with Android and iPhone

You can add your Android device to SyncMate whether via Wi-Fi or Bluetooth.

In addition to Android, you can also add your iPhone or iPad to SyncMate in case you want to synch them with your Mac.

Dropbox, Google Drive, and OneDrive are three of the most popular cloud storage services. If you have files stored on those services, you normally need to install three client apps to sync your cloud files with your Mac. With SyncMate, you just need to install one app. You can simply add your accounts and SyncMate will do its job as a syncing hub for your cloud storage accounts.

What data are synced by SyncMate

We have talked length and width about how SyncMate can help you to synchronize your Mac with lots of devices and services. One question. What data are synced by SyncMate? It depends on the type of device/service you add to your SyncMate. In general, here are the data that are synched by SyncMate:

The syncing process is run automatically via the background so you don’t need to open SyncMate only to run the sync.

While the paid version supports the following types of data:

You need to spend $39 to get the paid version of SyncMate for a single Mac device.

SyncMate can be a great solution if you have accounts on multiple cloud storage services — such as Dropbox, Google Drive, and OneDrive — and want to sync them with your Mac. You don’t need to install every official client app offered by each cloud service to sync your cloud files. This way, you can save your Mac resource. SyncMate can also play a role as a hub to connect your Mac and Android and iOS devices for easier file transfer.

FamilyTime Review – Does It Really Protect Kids from Digital Threats?