Better Tech Tips
Home Reviews Dropbox vs Google Drive. Which One You Should Use?

Dropbox vs Google Drive. Which One You Should Use? 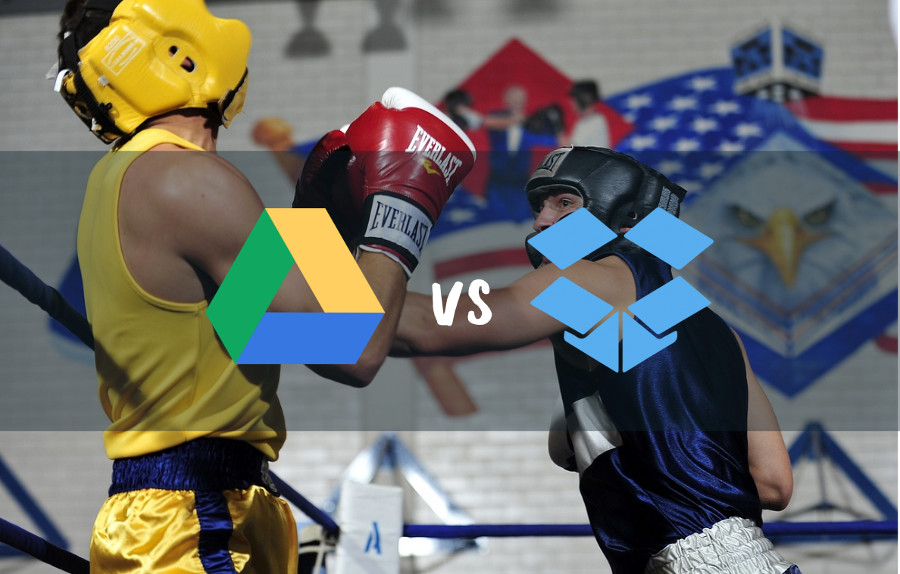 Dropbox and Google Drive are two of the most favorite cloud storage services available today so it’s unsurprising to see many people compare the two in many occasions. Which one you should use?.

Before answering the question, let’s take a further learn to get to know more about those two favorite services.

Dropbox is a cloud storage service that was released in 2007. The project was founded by MIT students Drew Houston and Arash Ferdowsi with initial funding from seed accelerator Y Combinator. Google Drive, on the other hand, is younger than Dropbox. The service was just launched by Google in 2012 when other big names like Box, Microsoft OneDrive (previously SkyDrive) and Dropbox have entered the market.

To find out the winner between Dropbox and Google Drive, there are several aspects we need to notice. Let’s discuss them one by one.

User interface often becomes the first factor considered by most people when choosing an app or service. Cloud storage is no exception. Dropbox and Google Drive come with a clean interface that are easy to use. It takes only minutes for new users to learn how to use them.

The menus offered by both services are also not much different. When you select a file — be it on Dropbox or Google Drive — you can do such things as renaming it, copy, delete, move and so on. Not far different when you are organizing files using file manager on desktop. Dropbox slightly superior to Google Drive when it comes to viewing option. In Dropbox, you can view files by name, date modified, file size, file size and extension. At the time of writing, Google Drive only allows you to view files by date modified.

The color selection of folder icon of Dropbox is also better than Google Drive. Dropbox comes with the icon folder color of turquoise which is more comfortable to view.

Be it Dropbox or Google Drive, they both offer free storage space to allow users storing files on the cloud without having to spend any dollar. Google offers more spacious free storage space with 15GB, while Dropbox only gives you a 2GB of free storage. Until here, it’s easy to conclude that Google Drive is the winner in this section. But wait, there are several other things you need to know.

Despite Google gives a 15GB of free storage, it’s not purely for Google Drive. You have to share this space quota with two Google’s services; Gmail and Google Photos. So, for instance, if you frequently uploading new photos to Google Photos, it will affect the storage capacity of your Google Drive. Dropbox, on the other hand, although it comes with a fewer free storage offering, you can actually expand the space up to 16GB by referring your friends to use Dropbox. There is 16GB additional free space you can get if you can refer more friends to become Dropbox users.

The problem is, referring friends to use Dropbox isn’t a simple task. Especially in today’s age when most people already have at least one cloud storage service.

It’s extremely easy if you need more space but don’t want to upgrade your free account, be it on Dropbox or Google Drive. You can simply create multiple accounts of those services and you will get what you want.

However, it’s a terrible idea especially if you use them for business since it can mess up your file organization. Moreover, if you use them as a storage medium for your team.

Dropbox offers two kinds of paid storage. For personal use (Individual plans) and team use (Team plans). If you want to use premium version of Dropbox for personal you can choose between Plus and Professional plans. There is no difference between these plans in terms of storage capacity. They respectively offer 1TB of storage capacity. What make them different are the features and cost you have to pay. See the pic below to see the pricing options and click here to learn more about the feature differences. 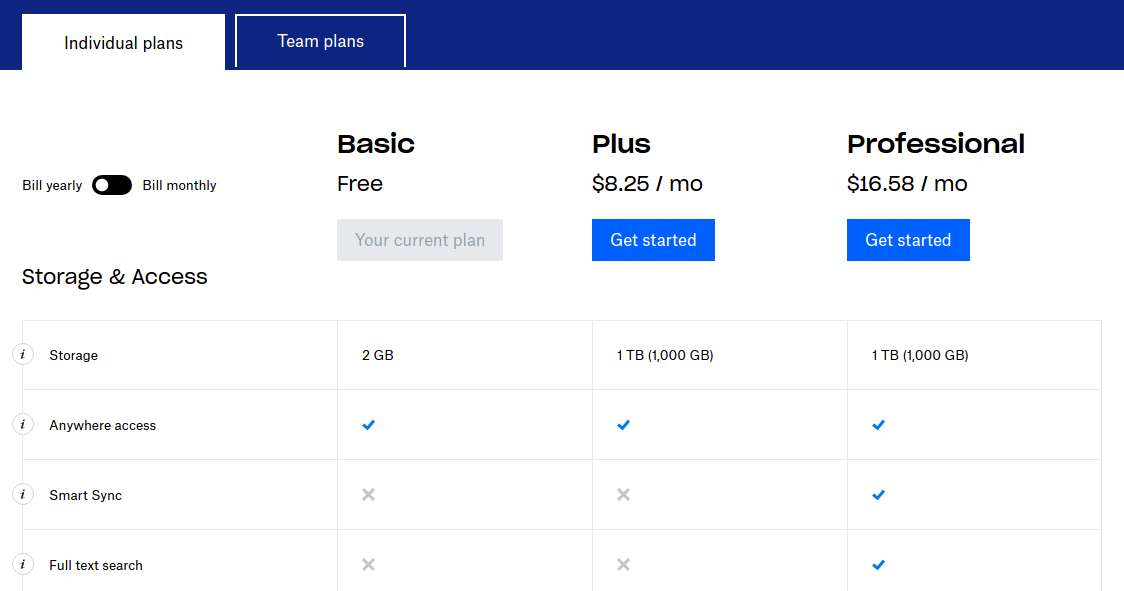 If you think that 1TB — which is the minimum storage capacity offered by Dropbox premium — is too much then Google Drive is better option since it has more vary packages. On the other hand, if you need storage capacity with more flexible paying options then Dropbox is more suited since it also accepts PayPal other than credit card. Plus, you don’t be tied with a long term contract. You can cancel the subscription plan anytime you want.

Dropbox provide more client apps than Google Drive. In addition to web, you can also access and upload your files to client apps on Windows, macOS, Linux, Android to iOS. Not far different, Google Drive also has a wide range of client app availability. With the exception of Linux.

Dropbox has an additional feature of sync called Smart Sync that allows you to access all of your Dropbox files from desktop without taking up all your hard drive space. The conclusion, if you are looking for a cloud storage service with more syncing supports then Dropbox is better

As the big companies with million users Dropbox and Google obviously don’t ignore the security aspect. They both come with 128-bit AES and 256-bit AES encryption mode to protect your files, be it when they are being transferred or when at rest. Additionally, Dropbox and Google Drive also offer two-factor authentication for decrypting files, to prevent unauthorized users from gaining access to the files.

When it comes to privacy, they both also protect their user’s information in many respects. However, referring to privacy rating by the Electronic Frontier Foundation, Dropbox slightly superior to Google Drive since it awarded a five-star. Google Drive was “only” given four stars. Read here to learn more about this privacy rating.

The biggest advantage of using cloud storage service is that it is a lot easier if we need to share certain files with someone. Dropbox and Google Drive allow you to share files and folders by creating links that refer to each file and folder you want to share. If you select this method to share files, it means that your files will be accessible by all internet users since links are public. If you are a premium user of Dropbox you will be able to set the password and expiry dates on links you share. Google Drive, on the other hand, hasn’t offered this feature.

If you want to share files more privately, Dropbox allows you to share files via email address. In Dropbox, it’s easy to to see which files you have made accessible to others by accessing the Sharing page. 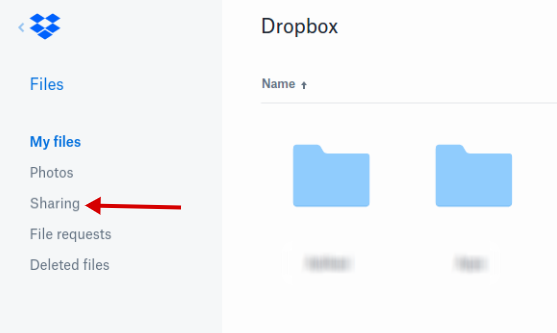 Google Drive also allows you to share files more privately via email address. But, it comes with additional options. You can set the permission levels of the files you share with. You can set whether the people you share the files with have the ability to edit, see and leave a comment. 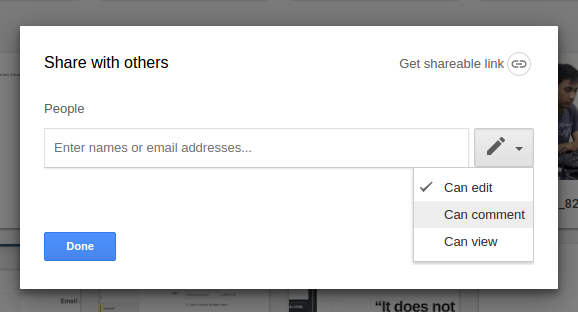 In April 2015, Dropbox introduced a note-taking app called Dropbox Paper. This app allows you to create a document with your team. Dropbox Paper is a cool note-taking app. You can leave a live comment over certain part within the document you are currently working on, making it great for remote collaboration. Additionally, Dropbox also allows you to create a custom shared folder so you can separate between personal files and team files.

Finally, we have come into conclusion section. Without needing to repeat explanations above, we can conclude that Dropbox is the winner of this battle.