Better Tech Tips
Home Security IP Spoofing: What is It and How Does It Work?

IP Spoofing: What is It and How Does It Work? 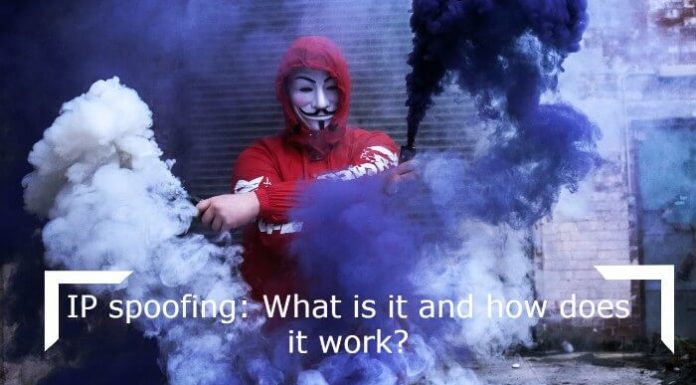 IP spoofing is a type of cyber-attack of which you should be aware. The intruders hide their IP addresses to go unseen, and this practice often comes to play in distributed denial of service (DDoS) attacks. If you want to learn more about the dangers of IP spoofing, how it works, what happens when it goes wrong, and ways to defend your company against it, keep reading!

All About IP Spoofing

Spoofing is a kind of cyber assault in which offenders imitate another gadget, user, or client to hide their identity. This disguise shields attackers from detection and allows them to access systems with the objective of doing harm such as interception of data or establishing a DDoS attack to disrupt regular traffic. One simple way is to find and secure your IP address.

There are three different types of spoofing assaults:

The most frequent of these assaults is IP impersonation. This form of spoofing provides hackers with anonymity by masquerading as originating from a different IP address.

To comprehend how IP spoofing functions, you must first grasp the purpose of IP addresses in internet communications. Data is transferred over the internet via packets, each of which contains information regarding where the data originated.
An IP, including the origin and destination IP addresses, is one of the most essential components of this packet. IP addresses, like physical IP, are used as identifiers and allow computers to determine whether the information is coming from a reputable source.

IP addresses are also utilized to determine traffic origins to a system or server, much like person names allow us to recognize who sent the data.

When a hacker modifies the source IP address in a packet, they’re performing IP spoofing. When done correctly, this modification may go unnoticed since the switch takes place before a hacker has access to a controlled system or network. Consider it a kind of disguise because hackers can impersonate others by using IP spoofing.

Why is IP spoofing dangerous?

IP spoofing is a hazardous sort of assault since it’s nearly impossible to recognize. This is due to the fact that an attacker may attempt to access a method or transmit with an unsuspecting victim before utilizing IP spoofing.

Assume the following consequences of this complex detection.

Below are 3 types of spoofing attacks.

A DDoS attack is a form of cyberattack in which a server’s resources are overwhelmed by traffic. Hackers don’t need to break into secure systems to succeed; instead, they launch a concerted assault on a server in order to bring it down for legitimate users. This tactic is frequently used as a diversionary tactic.

DDoS attacks are a type of cyberattack that overwhelm and crash websites by bombarding them with fake traffic. DDoS attackers can use this approach to lie about their identity to security experts and law enforcement, resulting in a DDoS attack that masquerades as legitimate internet users. While the source of an attack is difficult to identify, identifying other malevolent activity for which the DDoS assault may be used as a diversion gets more difficult.

Botnets are networks of computers infected with malware and controlled by hackers, usually without the users’ knowledge. These botnets may be controlled as a group, giving them the name “zombie army.”

Botnets are most often utilized for spam and DDoS assaults, although they may also be used to warn organizations of an impending assault that can be prevented by paying a ransom. Botnets can also be used by hackers to track and steal data from people whose devices have been compromised.

For a variety of reasons, IP spoofing makes botnet assaults possible from beginning to end. First and foremost, since IP spoofing is difficult to detect, it indicates that device owners will most likely be ignorant of any illicit activity.

3. Man in the Middle Attacks

When a third party interferes with trusted communications between two other people or devices, it’s known as a man-in-the-middle attack. Security measures like certificates and IP addresses are designed to authenticate a person’s or device’s identity in the context of digital conversations.

Someone assumes another identity to intercept communications intended for someone else in a man-in-the-middle attack. Hacking groups can use this information or even change the intended recipient’s original communication once they obtain it.

Spoofing is a method of deception that allows attackers to impersonate another user, device, or service and thus become a “man in the middle.” They can simply intercept communications without the sender knowing and even send data to an unwitting recipient under the illusion of someone else (e.g., an email from your bank asking for sensitive information).

Cybersecurity is Critical in the Digital Transformation Era

How to Choose the Right and Secure VPN

Privacy and anonymity on the Internet has long been a necessity, not a luxury. In order to use the usual sites and applications in...
Read more
Security

Do You Know How to Avoid Holiday Scams?

The holiday season is here, and it is the time for sharing and celebrating. This is the perfect time that presents plenty of opportunities...
Read more
Security

Most of us hear about data breaches on the news or read about it when we open our phones and the entire internet is...
Read more