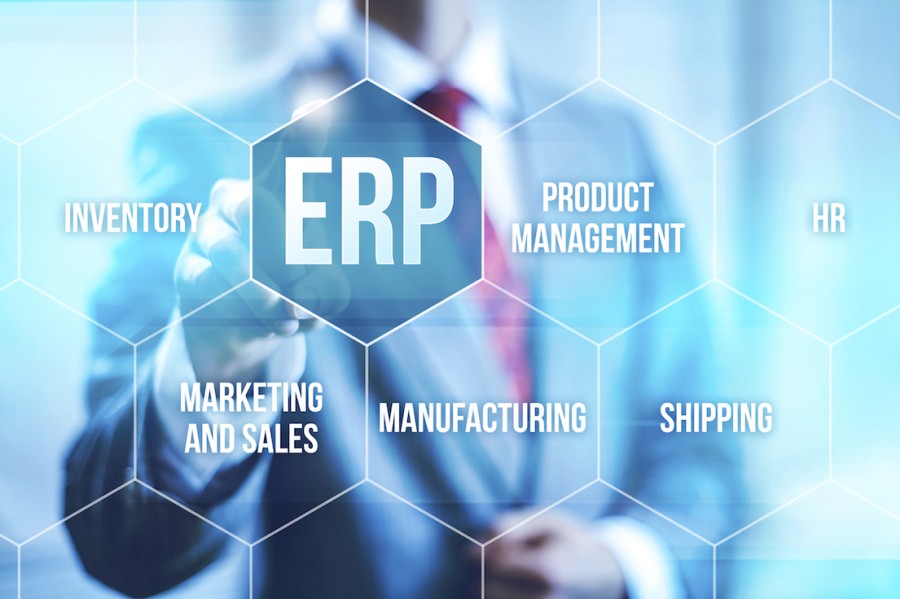 There are a wide range of reasons why do you want to implement an open source ERP software to your business. One of the biggest possibilities is you probably want to make an efficiency. Instead of using different software on each department — which is probably less efficient — you can use an integrated software in the form of ERP.

An ERP software commonly consist of several modules for handling more specific task. It usually has the capability to track business resources like cash, raw materials and production capacity. In addition, it can also tracks the status of business commitments like orders, purchase orders, and payroll. 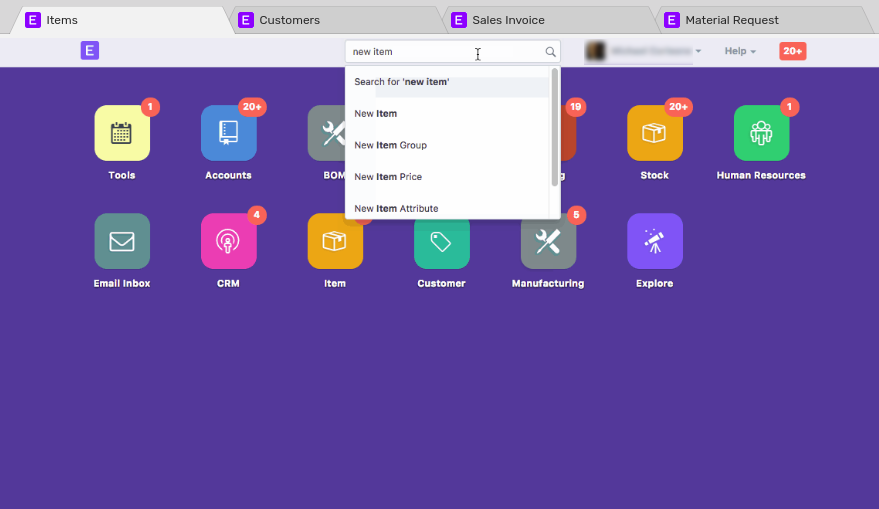 The first open source ERP software you can try is ERPNext. This software is developed by an India based internet company, Frappé. ERPNext is the flagship product of the company. The software is released for free with the source code available, under the GNU/General Public License. However, the company also offers the hosted version of ERPNext in case you have no IT staff for handling the technical aspect of installing it. ERPNext is a great software to implement by small and medium-sized companies in the sectors like retail, manufacture, distribution to education. Modules offered by ERPNext include accounting, managing inventory, sales, purchase, and project management. The source of ERPNext is available on GitHub. ERPNext is written in Python and JavaScript. This software uses MariaDB as the DBMS. 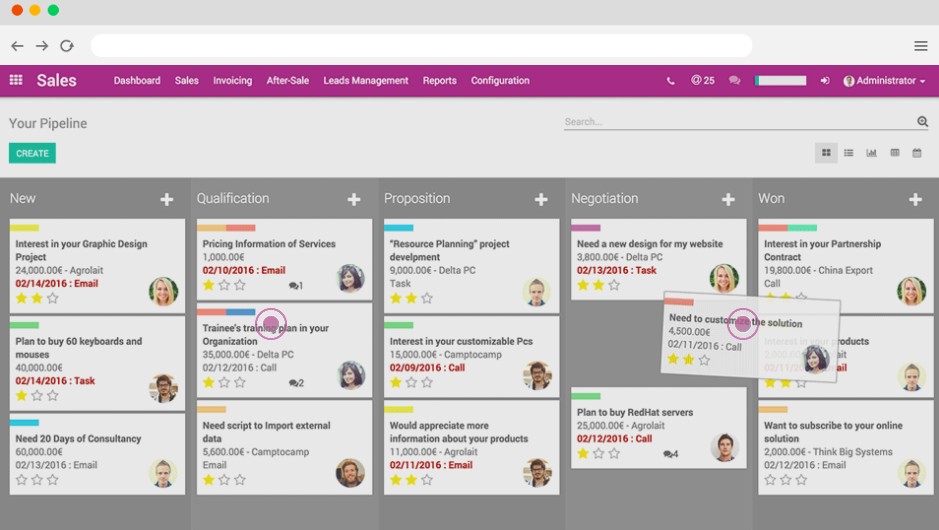 Odoo is a popular open source ERP software. Some big companies like Toyota, Hyundai and Danone even also use this software. Some modules offered by Odoo include project management, billing, accounting, inventory management, manufacturing, and purchasing. Same as ERPNext, Odoo is also available in two versions, hosted and self-hosted. The source code of Odoo is also available on GitHub under the GNU Lesser General Public License version 3. Before downloading Odoo and install it on your server, you can take advantage of the demo offered by it. Odoo is also written in Python. 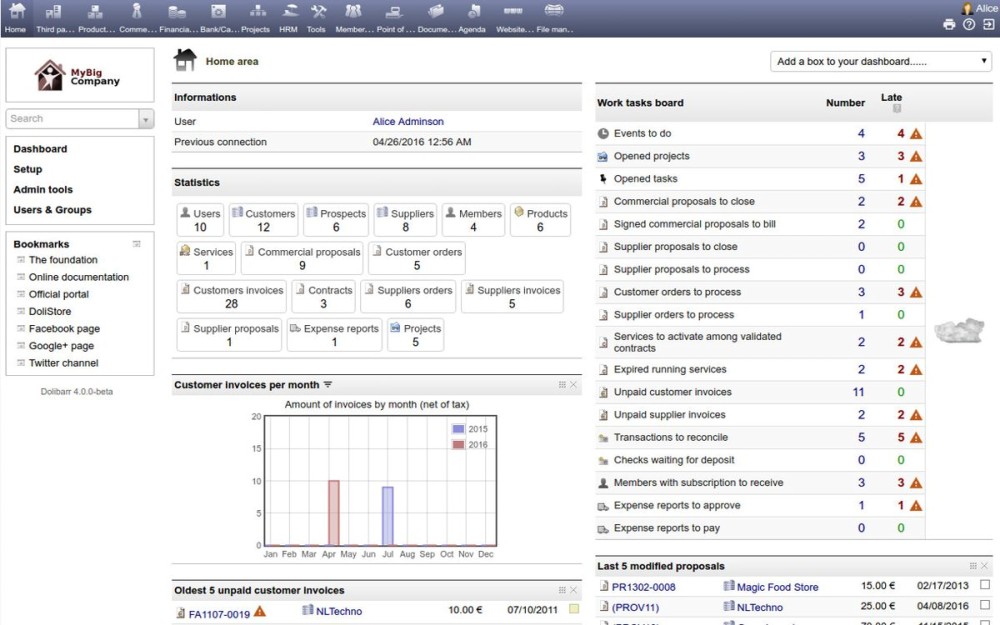 Dolibarr has one thing in common to ERPNext. It is also aimed at small and medium-sized businesses. Unlike two software above which offer hosted version, Dolibarr doesn’t offer the same thing. So, to use this software you have to download and install it on your server. Before doing it, you can also give Dolibarr a try first since it also provides an online demo. Several modules that Dolibarr has include sales, human resources, logistic, stock, invoicing, accounting and manufacturing. Dolibarr allows you to enable only the modules your company need. Dollibar is a PHP-based open source ERP software. This software is released under the GNU General Public License 3.0. The source code of Dolibarr is available on its official site. You will also find the source code of this software on GitHub but it’s the development version. The stable version is only available on the official site. 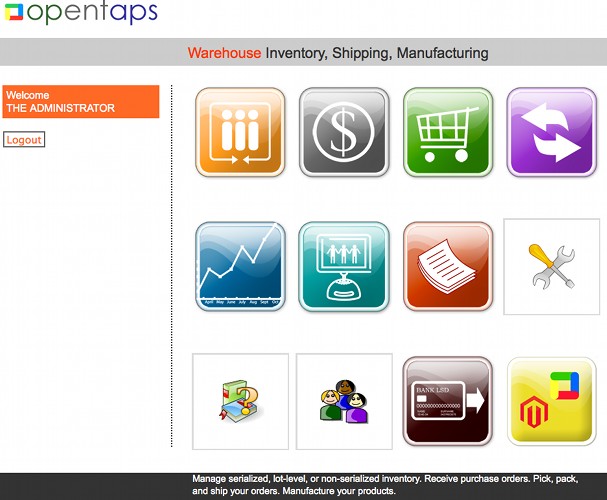 Opentaps is great to be implemented on larger companies. Just like other ERP software above, Opentaps also comes with a number of modules like inventory, manufacturing, financials, and purchasing. If you need more modules outside of the default modules, there are also several paid modules you can buy. Opentaps itself is released under a dual open source/commercial licensing model. It is available as free software under either GNU Affero GPL v3 for Opentaps 1.4 and later or the Honest Public License (HPL) for earlier versions.

On the other hand, the Opentaps commercial license allows you to take advantage of all the features of Opentaps without the obligations of the open source licenses. You are still allowed to access and modify the source code of the commercial license. 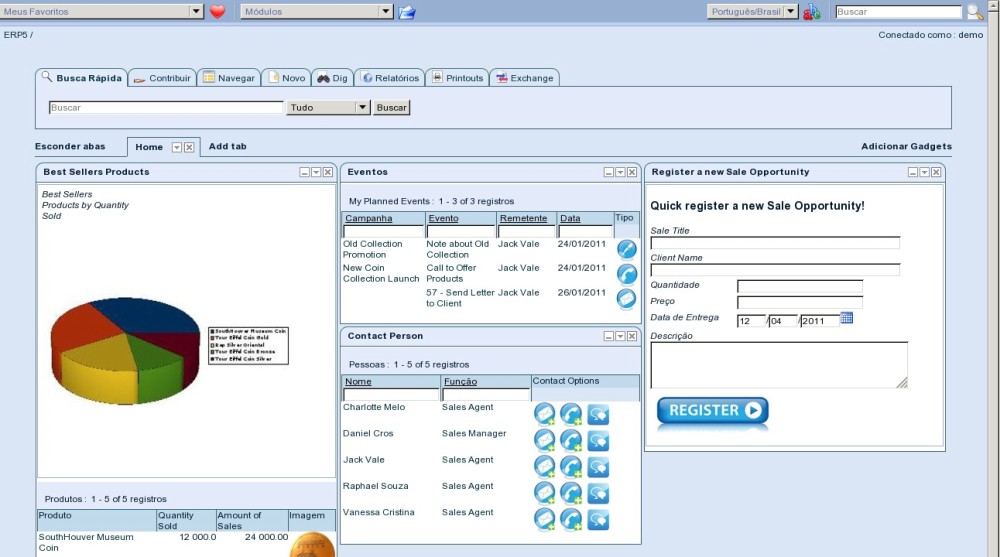 ERP5 is a great open source ERP software for those who need a flexible and scalable business platform. This ERP software is developed by Nexedi, a company that claim itself as the Europe’s largest open source software publisher. ERP5 consists of several modules from accounting, project manager, manufacturing, inventory, CRM and so on. According to ERP5, its product is used by large institutions from banks to governments. ERP5 itself is written in Python, released under the GNU General Public License. You can download the source code of ERP5 from its official site.

As the name suggests, webERP  is a web-based ERP software. This software is written in PHP and released as a free, open source software under the GNU General Public Lisence version 2. webERP consists of standard features of an ERP software including inventory, manufacturing, sales, asset manager and so on. The source code this software is available on SourceForge. webERP actually also offers a demo but, it is not works when I tried it.

LedgerSMB stands for Ledger Small Medium Business. As you can guess, this software is intended at small and medium-sized businesses. Most LedgerSMB modules are finance-related. Like accounting, budgetting, invoicing, quotations, projects, timecards, inventory management, shipping and so on. LedgerSMB is a Perl-based software. It uses PostgreSQL as the DBMS. You can get the source code of this software on GitHub, which is available under the GNU General Public License v2.0. You can also take advantage of the offered demo to find out if this software suit your company needs or not. 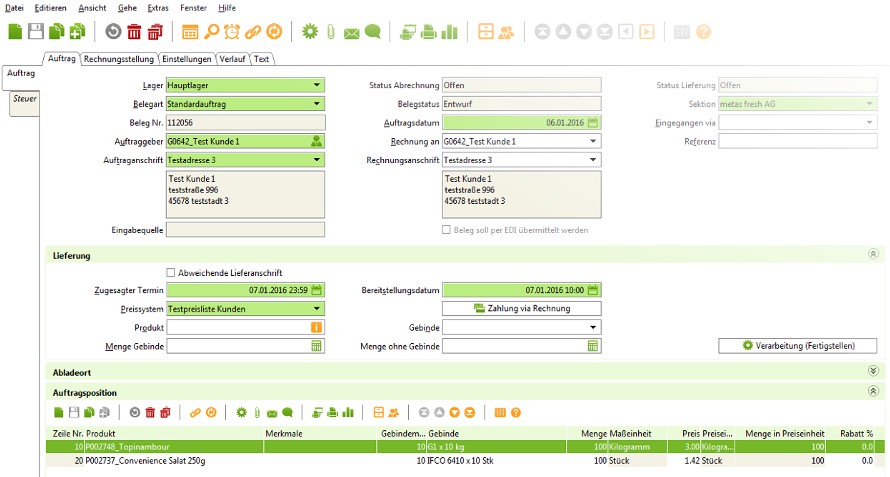 Last but not least. metasfresh is also an open source ERP software that deserve your test. metafresh is an ERP software that is written in Java and JavaScript and uses PostgreSQL as the DBMS. The software is aimed at small and medium-sized businesses. The development of metafresh is based on requirement implementations of midsize company projects during the last 8 years. The metasfresh Project was initially founded in October 2015, as a friendly fork of the Open Source ERP System ADempiere. Some modules you will get from metafresh include sales, CRM, manufacturing, billing, acounting and so on. The source code of metafresh is also available on GitHub but you can also download the metafresh package directly from its official website. Metrafresh is licensed under the GNU General Public License v2.0

What Is an MSP? What are the Benefits of Having an MSP Manage Your IT?