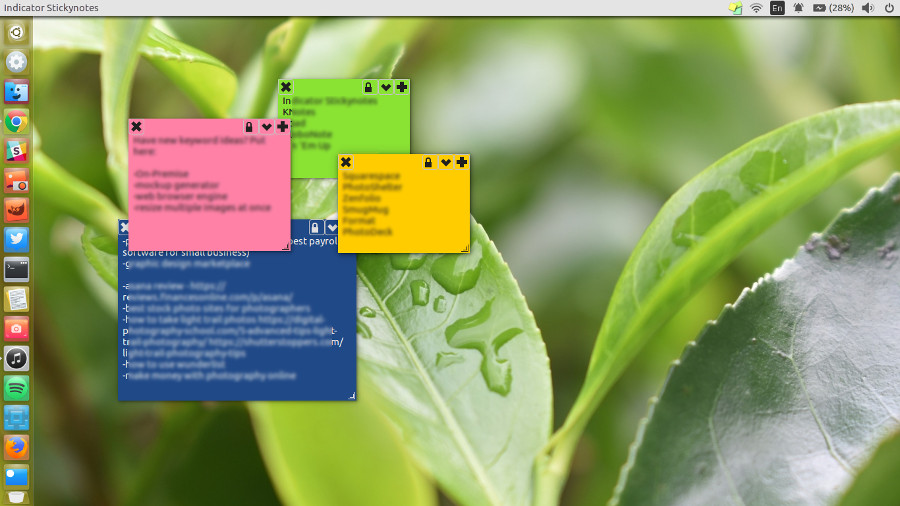 Going paperless can be started by a very simple thing like replacing physical sticky notes with virtual sticky notes. If you use Ubuntu, there are several options of sticky notes app you can install.

Instead of going to a stationery store to buy some sticky notes, you can install sticky notes app on your Ubuntu laptop/desktop to replace the physical sticky notes as a part of your process to adopt the paperless lifestyle. Sticky notes itself is a tiny but very useful stuff. Many people use it to write down today’s to-do list, next plans, recording sudden ideas and so on. 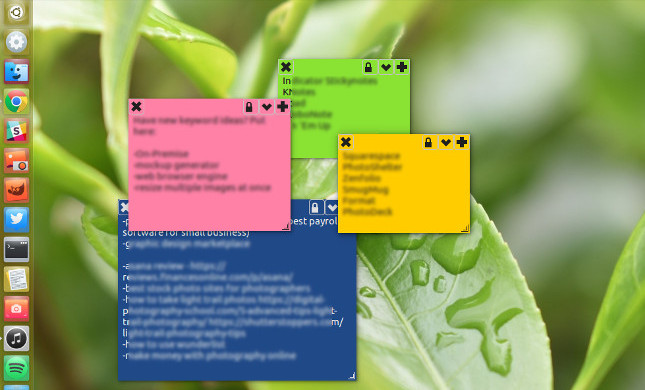 Indicator Stickynotes is one of the best sticky notes app for Ubuntu and Linux generally. This app is written in Python by Umang Varma. I have been a user of this useful app for years until today. It’s pretty cool to me in helping me writing what I have to do today as well as help me recording sudden ideas. In Indicator Stickynotes you can easily create sticky notes. Additionally you can also organize them by creating categories to put together all of the related notes. Each category can has a different background and font color. Ubuntu doesn’t add Indicator Stickynotes on its repository package list. To install this app please refer to this page. 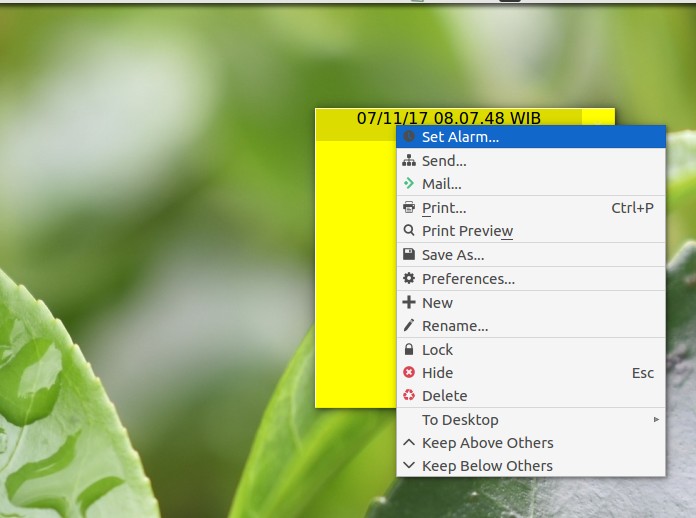 KNotes is a sticky notes app part of KDE project. This app is originally intended for KDE desktop environment, but it also runs seamlessly on other desktop environments including GNOME and Unity. Compared to Indicator Stickynotes, Knotes has more complex features and capabilities. Same as Indicator Stickynotes, Knotes also offer yellow background at the default setting, but you can change it and replace with your favorite colors. This app also offer drag and drop functionality for repositioning around your desktop. As you can see from the image above, there are more things you can do with your Knotes notes like setting the alarm, send them and print them as well.

KNotes has been added to the Ubuntu repository package list so you can install it by executing the following command. 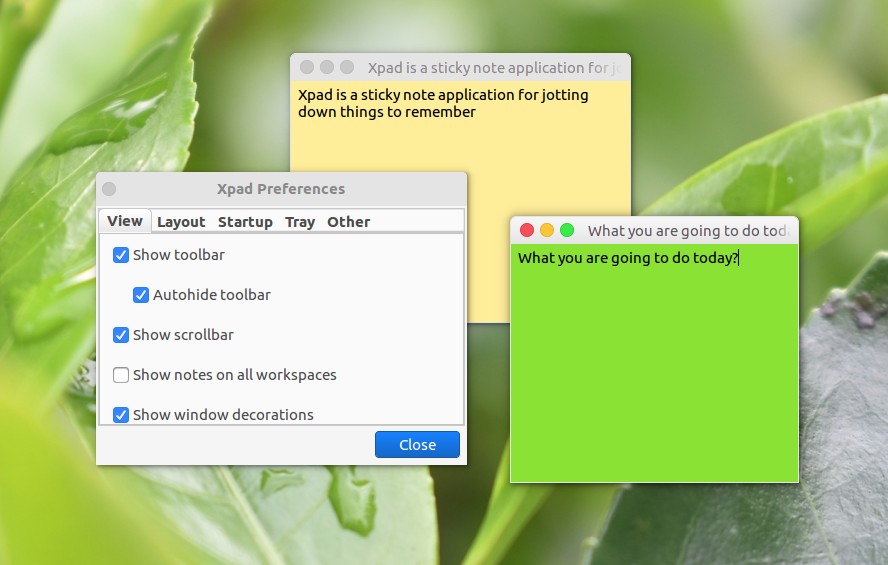 Xpad has been a popular sticky notes app for Ubuntu and Linux generally for years. This app has been around for years and still in an active development. The capabilities and features of by Xpad are not far different to two previous apps above. The appearance of Xpad is also fully customizable. Each note can has a different look just like Indicator Stickynotes and KNotes. If you right-click anywhere within the notes, a pop up menu will appear.

The interface of Xpad consists of three parts; title bar (window decoration), text area and toolbar (at the bottom). For a sticky notes, this interface may looks too crowded. Fortunately, you are given a chance to customize it by removing the parts you don’t like, tool bar for instance. You can customize the look of Xpad from the Preferences menu. Xpad has also been added to Ubuntu repository package list. You can install it by executing the following command. 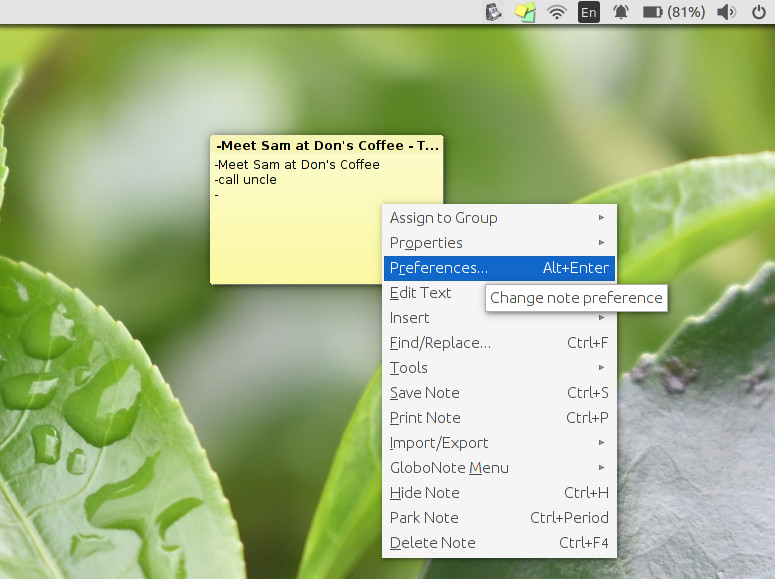 Not the best choice, but if you want to try this sticky notes app then there will be no sin. GloboNote is a cross-platform sticky notes app. In addition to Linux, the app is also available for Windows and macOS. GloboNote is written in Java and it requires Java virtual machine to run. GloboNote doesn’t available on the repository package list of Ubuntu so you have to download the package manually to install it on your Ubuntu machine. You can get the package of GloboNote here. To run it on your Ubuntu machine you can extract the tar.gz package and execute the “run.sh” file. 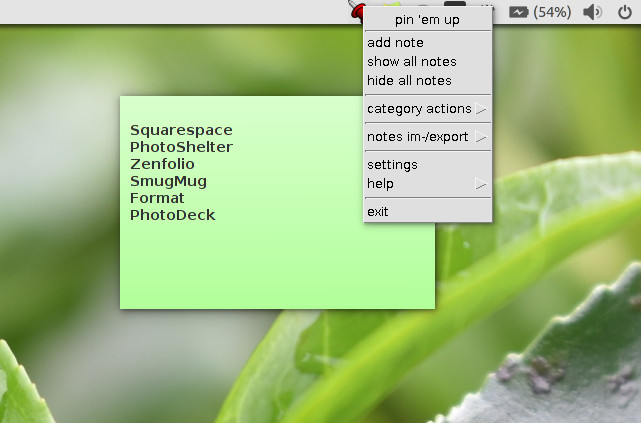 Pin ‘Em Up is another Java-based sticky notes app you can install on your Ubuntu machine, despite it is also available for Windows. Pin ‘Em Up is also not the best choice of sticky notes app for Ubuntu, but it’s worth-trying enough. This app is not available on the repository package list of Ubuntu. You can download it here. To run Pin ‘Em Up you can extract the zip package and run the following command (be sure to run this command from the folder of Pin ‘Em Up).

Since Pin ‘Em Up is written in Java, you will also need to have Java installed on your machine. Speaking of feature and interface, Pin ‘Em Up is pretty similar to GloboNote.

Previous articleDropbox vs Google Drive. Which One You Should Use?
Next articleShutterstock vs iStock for Contributor. Which is The Better?

The Most Important Curiosity Skills

Curiosity - maybe curiosity is what made you click on this article in the first place. But what is curiosity, and how can you...
Read more
Professional

7 Ways to Know if You Have a Great Business Idea

Starting up a business takes time and effort, and finding a business idea that is both feasible and viable necessitates extensive self-reflection. Better yet,...
Read more
Office

Looking At the Next Best Tool to Monitor Activity

Employee activity tracking doesn't simply mean monitoring what your employees are doing on their computers. Rather, it's about finding out if they are doing...
Read more
Internet

Which Things Online “Will” Service Asks Before Creating a “Will”?

Rich or poor, you need to create a will. It is extremely necessary as family life only takes a few seconds to get messy...
Read more
Professional

How Six Sigma Can Serve Benefits to Customers

Have you ever come across a ServiceNow article and thought to yourself, "Oh, I wish I'd learned these tips earlier?" If you answered yes,...
Read more