There are many note-taking apps available in the app stores. But, Evernote remains one of the best ones. There are some specific tasks that you can do in Evernote and can’t be accomplished by other similar apps.

However, Evernote has turned to become sucks. Free account is now limited to only two devices which is less good for flexibility. Particularly for who frequently traveling from one city to another by carrying different gadgets.

If you find Evernote really helpful in supporting your job, it will be a better idea to upgrade your free account to premium in order to get more features and break restriction of device. But, if you think that free account is enough and you want to stick with it, there are some ways you can do to maximize your free Evernote account.

1. Organize your notes better in notebooks

Evernote comes with a number of features to enable organizing your notes. Organizing notes is important if you want to use Evernote for a long period. At first, you may find everything is okay by ignoring notes organization. But, you will get in trouble once your notes reached a certain number and you have to find an old note.

Having your notes organized will ease your task of finding old notes whenever you need them. In Evernote, you can gather some notes with the same topic in a notebook. Be sure to choose a notebook every time you create a new note to keep it organized.

2. Use at least one tag for new note

Same as notebook, tag is also a great feature that you can maximize to keep your notes be more organized and discoverable. You can add multiple tags in a single note. Again, you will see how useful tag is once you in a certain situation that require to access your old notes. In Evernote, tags can be sorted based on date and title.

3. Don’t add too much images

Evernote is meant to help you recording your ideas. In Evernote, you can record your ideas in some mediums from text, audio, to images. If you frequently taking some pictures in Evernote then you need to know about this one. Your free Evernote account is limited to 60MB of uploads per month. So, if you add too much images with large enough sizes chance that you will reach your upload restriction. So, use the restriction wisely and avoid adding too much images.

Evernote is more than a note-taking app. It is also a great collaboration tool which you can use to work collaboratively in the internet with your colleagues from different locations. Evernote is integrated with other services to make it more convenient. Google Drive is one of the services that is supported by Evernote. You can attach your Google Drive files, whether it’s image or document, to Evernote notes. Before can do it, you need to connect the two services first. Connecting Google Drive to Evernote will also help you fixing your problem of upload restriction since you can add more files from Google Drive. 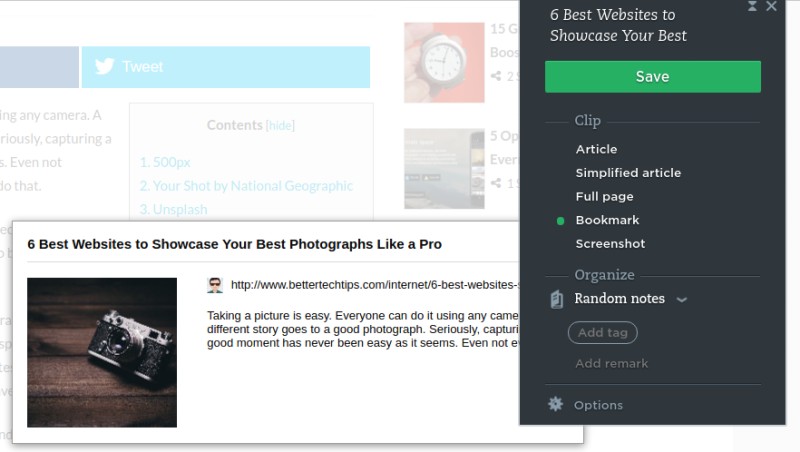 Native app of Evernote is available on mobile, desktop and web. Additionally, Evernote also provides a Google Chrome extension to ease you capturing ideas coming from web. Evernote extension for Google Chrome makes it easy to save every webpage that inspire you. You can take a screenshot and add some annotation directly right after selecting the webpage part. You can also bookmark some interesting URLs to be read later.

Evernote is one the most favorite collaborative tools. In Evernote, you can either share your notes or notebooks to let your friends or colleagues know what’s in your head and elaborate your idea to become a prospective projects.

7. Save your ideas even if you have no internet connection

Currently, desktop app of Evernote is only available for Windows and Mac only. There is no sign Evernote will be supporting Linux. If you are not a Linux user you can consider to install Evernote desktop app on your machine. Why?

Basically, there is no significant difference between Evernote web and desktop. It’s just, Evernote desktop supports some shortcuts to enable you perform some commands quickly.

9. Select two devices you use most often

Evernote has been applying its new restriction policy for free account which limits you to use only two devices for a single user. Of course, this is so sucks as it has reduced something we have been expecting so far from apps like Evernote, flexibility. The solution of this problem is actually easy, you can upgrade your Basic plan to Plus or Premium.

However, some users keep using free account because they haven’t met any reason to upgrade their account. If you want to keep using free Evernote account with the current restrictions, you have to wisely picking two devices which you use most often. For instance, you may can install Evernote on your working laptop/desktop and your main smartphone.

Luckily, Evernote doesn’t remove the reminder feature from free account so we still can use this handy feature to set reminder of certain notes. Setting a reminder is necessary to ensure we never miss any tasks.

4 Gmail Tips to Boost Your Productivity

Gmail has some useful default features that you can use to improve efficiency which eventually leads to better productivity. However, some of...
Read more
Software

At times like these where everyone is forced to work from home due to a pandemic, tools that allow users to work...
Read more
App

8 Essential Tools to Work from Home

Everyone is forced to work from home due to the Covid-19 outbreak. For those who work in a distributed company, working from...
Read more
Microsoft

Microsoft Teams: A Digital Workspace to Get the Job Done

Digital workspaces are made to finish everyday office tasks anytime and anywhere. They are an avenue where colleagues virtually gather to collaborate...
Read more
Mac

Your Mac probably has a ton of capabilities that you aren't even aware of. Learn these Macintosh tricks to get the most out of your Mac.
Read more
App

10 of The Best Meeting Scheduler Apps

Physical meeting is an inevitable thing in the business world. Even if you are a freelancer who acquires clients online, you sometimes...
Read more