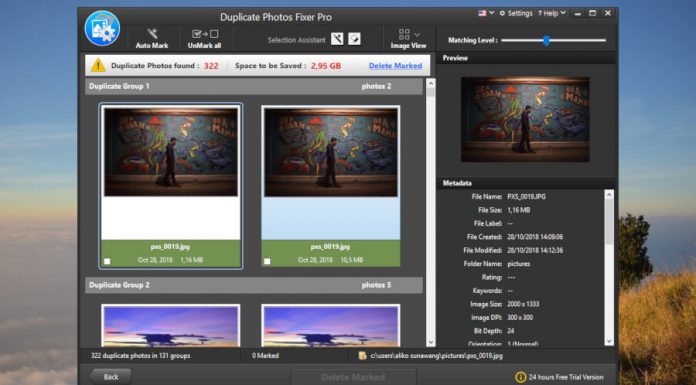 Following are our tool recommendations that you can use to remove duplicate photos on Windows.

Remo Duplicate Photos Remover is one of the products of Remo Software company. The tool features a proprietary algorithm called Dedupe Algorithm to scan for identical or similar photos. There is also an option to set the matching level to set the scanning accuracy. However, this tool gives you no option to exclude image formats. It will scan all image formats without exception. This tool allows you to remove the found duplicate photos directly from the app. Remo Duplicate Photos Remover is also a paid app. Demo version is available with limitation of removing only 15 photos. In addition to Windows, this app is also available for Mac, Android, and iOS.

Duplicate Photo Cleaner offers more features than the two first tools above. One of which, it allows you to save scan results into a file. This feature is pretty useful if you have not enough time to perform an immediate action after scanning. There are also more options regarding the scanning process. This tool offers four different scan modes; Standard Scan, Sector Detail Scan, Folder Comparison, and Same Subject Scan. Duplicate Photos Cleaner allows you to set the matching level (called similarity threshold) and exclude image formats. In addition to Windows, Duplicate Photo Cleaner is also available for Mac.