HomeWindowsHow to Use Command Line History on Windows Command Prompt 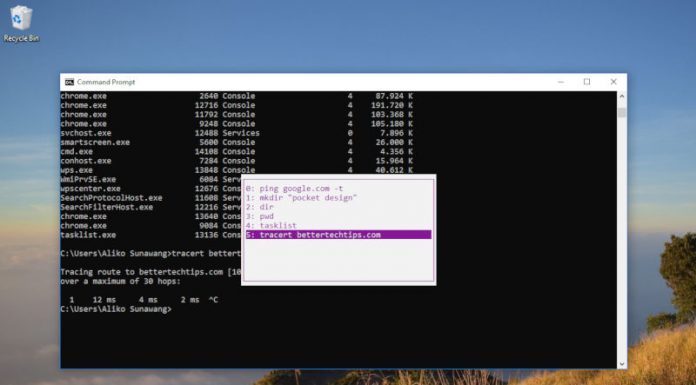 Linux users who used to using the command line on a daily basis must get clumsy when switching to Windows. On Linux, you can effortlessly use the previous commands you typed by just pressing the up and down arrow keys on the keyboard thanks to the history feature. On Linux, the history feature applies not only for the current session but also for previous sessions. The different story goes on Windows.

The Command Prompt on Windows also offers the history feature. However, it doesn’t remember commands from the previous sessions. This means you won’t be able to reuse the commands you used on previous sessions as you can do on Linux.

How to use the command history

You can use keyboard shortcuts to show the command history on Command Prompt. Following are the shortcuts you can use.

If you want to print all of the commands you have used within a session, you can type following command.

The command above will display the list of the commands you used within a session. Much like F7, but not in a pop-up.

How to clear and save your command history

As we have mentioned earlier, the Command Prompt of Windows doesn’t record the commands you have typed on the current session for the next sessions. Everything will be lost once you close the session. So, you can simply close your current session to clear the command history.

If you want Command Prompt to forget everything you typed on the current session, you can set the history size to 0 with the doskey.

By setting the history size to 0, you won’t be able to use shortcuts like F7, arrow keys, F8, and other shortcuts mentioned above.

You can use cls to clean up Command Prompt.

If for a certain reason, you want to save your command history into a text file, you can use doskey. Following is the example.

The command above will save your command history to a text file called “commands.txt” on the Documents folder on your Windows account.

How to Install and Customize the Windows Terminal

How to Use The Shutdown Command in Windows 10